Google Inc. (GOOG), Apple inc. (AAPL): Samsung Comes Up Short in the Next Evolution of the Smartphone Wars

The arms race for global smartphone superiority heated up once again Thursday night, as the second major smartphone launch of 2013 took place at New York City’s Radio City Music Hall. There, South Korean electronics giant Samsung lifted the curtain on the latest edition of its best-selling Galaxy line of smartphones — the Galaxy S4. 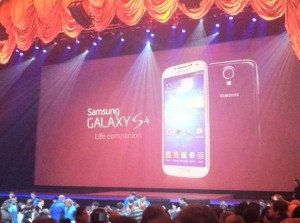 After a banner 2012 in which Samsung claimed the top spot for global smartphone and generated the majority of the profits among handset makers using Google Inc. (NASDAQ:GOOG)‘s Android mobile OS, last night’s launch ushered in what’s likely to be the next chapter in Samsung’s amazing run in the smartphone space.

Much was made of what would and wouldn’t appear in the device in the week leading up to yesterday. Now that we know, here’s what investors and consumers will get in Samsung’s latest and greatest.

The Galaxy S4 unpacked
I was fortunate enough to attend the launch with a few fellow Fools, and one thing was abundantly clear: Samsung’s strategy with this phone centers mainly on software.

Although the basic OS was the Android 4.2.2 Jelly Bean many expected, Samsung layered a number of new programs and features on top of it, all of which are aimed squarely at challenging arrival Apple Inc. (NASDAQ:AAPL) in their perennial battle for handset dominance. Here’s a short list of some of the new software features Samsung packed into its latest handset.

Samsung repeatedly touted the idea that the S4 is more than simply a phone, calling it a “life companion.” Although that sounds more like a spouse than a piece of technology, the notion is clear that the Galaxy S4 is intended to cater to every aspect of its users’ increasingly mobile lives.

On the personal side of things, many of the new features center on the camera, and for good reason. The camera itself underwent a major upgrade this time around. The back-facing camera now comes in at a whopping 13 megapixels, and the front-facing camera a respectable 2 megapixels. The software supporting that camera comes with a bevy of features that allow the users to do things like use the front and back-facing camera in a single shot, include sound with pictures, and splice a sequence of images into a single frame. Definitely neat.

On the productivity side of things, Samsung touted its new Knox software, which completely segments a user’s personal and professional content. This idea lines Samsung up to further tap into the BYOD movement that’s gaining momentum with tech-savvy corporations. It’s also been done before. Canadian smartphone maker Research In Motion Ltd (NASDAQ:BBRY) introduced a nearly identical feature called BlackBerry Balance when it launched its next-gen BB10 operating system in January.

And for being a software-driven phone, the hardware certainly isn’t a slouch, either, keeping with the engineering theme we saw in the iPhone 5 — bigger, thinner, faster. The screen size came in at the 5 inches many expected, up from the still-sizable 4.8-inch display of its predecessor. This screen is also capable of 1,080p quality output, all while being substantially more power efficient as well. In summation, it’s an impressive device no matter how you slice it.

Mr. Market thinks differently
However, judging by the market’s reaction, it seems investors are as underwhelmed as I. Shares of Samsung were down more than 2.6% on Friday, while shares of Apple Inc. (NASDAQ:AAPL) rose more than 2.5%.

The problem amounts to what’s arguably been the single biggest knock against Apple over the past 12 months — that’s the Galaxy S4 doesn’t offer anything truly innovative or amazing. In a global smartphone market that has clearly come to expect “insanely great” with each new product cycle, this device sadly falls short by only being very good.

However, that’s also not to say the phone won’t be the massive commercial success most analyst expect. After all, you don’t get to 100 million devices shipped without doing a few things right. Analysts have estimated that the Galaxy S4 could sell as many as 10 million units in its first month alone. However, that figure also only barely keeps Samsung ahead of the smartphone pack, and it’s only mid-March. We’re sure to see plenty of fireworks in the coming month, as many expect Apple Inc. (NASDAQ:AAPL) that is readying its own counter-assault, maybe even sooner than normal.

Foolish bottom line
The Galaxy S4 bears an uncanny resemblance to the “Unpacked” event that introduced it to the public. It had no shortage of glitz and glamour (or song and dance, in this event’s case), but it still ended up giving users less than they’d hoped for. It will sell in droves; count on that. But in an environment where investors demand more than pure sales volume, the Galaxy S4 manages only to stay slightly ahead of the pack.

The article Samsung Comes Up Short in the Next Evolution of the Smartphone Wars originally appeared on Fool.com.