Garmin Ltd. (GRMN): This Company Needs to Innovate to Thrive

Garmin Ltd. (NASDAQ:GRMN) is still a major player in personal navigation devices, but its grip on the market is fading. Larger players like Google Inc (NASDAQ:GOOG) and Apple Inc. (NASDAQ:AAPL) offer more convenient options thanks to the increased popularity of smartphones. However, only one of these technological behemoths has delivered on their maps. We’ll get to that soon.

Garmin Ltd. (NASDAQ:GRMN) has seen growth in some other areas, but that growth isn’t going to be enough to compensate for the market share lost in personal navigation devices. There’s only one way Garmin will be able to thrive in the future, which I’ll tell you soon. And even if Garmin isn’t capable of thriving, the long-term potential for the company isn’t necessarily bad.

If you’re looking for growth and a thriving company, then you’re probably (not definitely) going to be disappointed. Management already announced that it expects a 20% decline in revenue this year, citing the popularity of smartphones as the primary catalyst for the company’s revenue decline.

Google Inc (NASDAQ:GOOG) Maps is extremely popular, and it’s looked at as the go-to source for directions. Apple Inc. (NASDAQ:AAPL), on the other hand, has failed in this area. CNN ranked Apple Maps as one of the Top 10 fails of 2012. Apple probably wishes it could go back to that fateful day of June 11, 2012, when it announced that its maps would no longer be powered by Google Inc (NASDAQ:GOOG) Maps. The concept made sense. Why help your competitor? But the last thing you want to do is aggravate your customers to a point where they lose trust in your business.

Apple Maps relied on TomTom and AutoNavi to provide accurate data, but it led to misidentified locations and miscalculated distances. You could type in that you wanted to go to a hospital 10 miles away, and you might have ended up at a hot dog stand around the corner. It even got to a point where people wouldn’t use Apple Maps just for navigation, but for humorous entertainment as well. Apple Maps also failed to offer street views or transit directions. Apple Inc. (NASDAQ:AAPL) CEO Tim Cook apologized for the mishap, and Apple Maps is constantly being improved.

For all you Apple longs out there, this isn’t a bearish case for Apple. It’s one failure out of many great successes for a very well-run and cash-rich company that is fundamentally unparalleled.

Garmin runs away from home

Garmin Ltd. (NASDAQ:GRMN) had relied on strong sales growth for its personal navigation devices for many years. With the industry changing, Garmin knows it must look to other revenue streams to help support the top line. Aviation and Marine have been the two top performers as of late, both seeing revenue increases last quarter sequentially. The problem is that Aviation only represents 15% of revenue, and Marine represents just 9% of revenue. Comparatively, Auto/Mobile represents 47% of revenue, and the word ‘growth’ has become foreign for that segment.

Garmin is focusing more on high-margin products, but that’s still not going to be enough to offset the slide in personal navigation devices. Garmin might have potential overseas, but it’s only a matter of time before industry trends catch up in those markets as well.

Garmin Ltd. (NASDAQ:GRMN) only has two chances for future growth. One, it somehow recaptures a stronghold in personal navigation devices (not likely.) Two, it relies on technological innovation to produce a product that blows the market away. This could be in any area that the company operates, or better yet, it could be in a new area, which would take the market by surprise, generate excitement, and drive the stock price higher.

If you’re considering an investment in Google or Apple, opposed to Garmin, because you want to play it safe, then you might want to take a look at this stock price chart first: 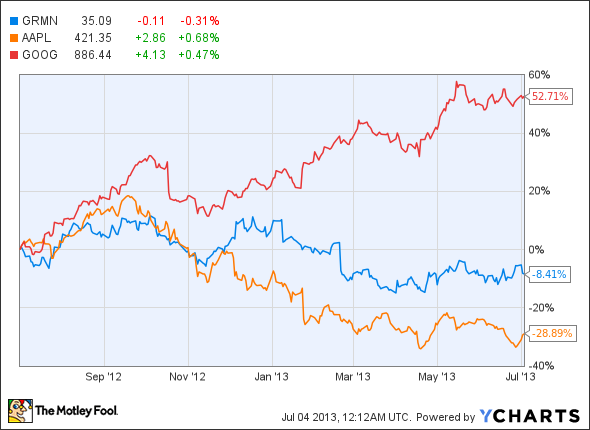