A recent report from the U.S. Department of Commerce showed an unexpected jump in retail sales for April, which rose 0.5% year-on-year after an anemic 0.1% gain in March. Excluding gas and auto sales, retail sales rose 0.6%. Economists had originally projected a 0.3% decline in April.

Strong sales of building materials, clothing, sporting goods and electronics boosted retail sales, which account for 30% of total consumer spending in the country. Lower gas prices, which slid an average of 14 cents per gallon in April, also gave consumers more discretionary income. Meanwhile, job growth has held steady over the past three months, allaying concerns that the U.S. economy is slowing down.

Amid all of these positive headlines, one figure stood out – sales of clothing stores recorded their highest year-on-year increase since last February.

Therefore, it may be a good time to consider investing in some smaller, higher growth retail apparel stocks, such as Francesca’s Holdings Corp (NASDAQ:FRAN), Vera Bradley, Inc. (NASDAQ:VRA) and rue21, inc. (NASDAQ:RUE). These three companies have posted strong double-digit top and bottom line growth in a time when larger retailers, such as Abercrombie & Fitch Co. (NYSE:ANF) and Aeropostale, Inc. (NYSE:ARO), have struggled. If U.S. retail sales continue to improve, these three small cap stocks could easily rally and outgrow their bigger peers.

For the ladies: Francesca’s Holdings

Francesca’s Holdings Corp (NASDAQ:FRAN) is the parent company of Francesca’s Collections, a national chain of women’s retail boutiques that sell clothes, shoes and accessories at low to mid-range prices on par with H&M and Forever 21. Francesca’s Holdings Corp (NASDAQ:FRAN) is focused on smaller format stores between 1,200 to 1,400 square feet, which the company believes gives it more flexibility at a wider variety of venues. The company is one of the fastest growing small cap retail apparel brands, opening 77 boutiques in fiscal 2012 and finishing the year with 360 boutiques. It is also one of the most ambitious companies, with a stated long-term goal of opening 900 boutiques across the country. 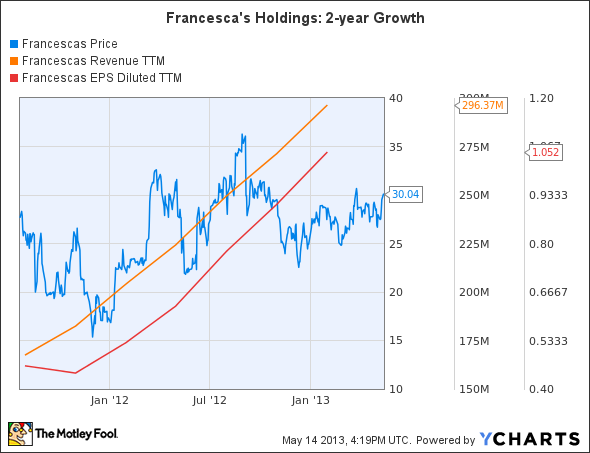 During its fourth quarter, Francesca’s Holdings Corp (NASDAQ:FRAN) same-store sales rose 16.7%, up from 14.7% growth a year earlier. Total net sales rose 40.6% to $86.7 million, with $19.5 million contributed by non-comparable boutique sales from its 77 new locations. Direct to consumer sales, which include the increasingly important e-commerce channel, rose 65% over the prior year quarter, yet only contributed to 1.9% of the company’s total sales.

Not only is Francesca’s Holdings Corp (NASDAQ:FRAN) top line growth impressive, it is also extremely profitable. It reported fourth quarter earnings of $0.33 per share, or $14.9 million, up from the $0.19 per share, or $8.4 million, it reported a year earlier.