A few days ago a friend asked me, “If I were to choose a social network stock to be long on for years, what would I choose?” Investing in the concept of a social network is not crazy at all. The industry is still relatively young, and therefore almost all social network firms are experimenting with various monetization approaches. Some are more successful than others. What is clear is that massive traffic does not translate automatically into amazing returns.

If we want to choose the best social network stock, we should not only focus on current traffic metrics, but also on monetization, future growth prospects and product uniqueness. In this article, I compare Facebook Inc (NASDAQ:FB), LinkedIn Corp (NYSE:LNKD), SINA Corp (NASDAQ:SINA) and Renren Inc (NYSE:RENN), trying to take into consideration every important aspect of the social network business. 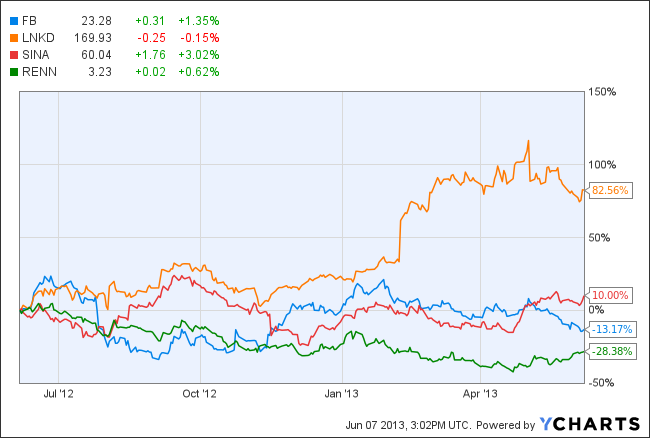 The good news is that most advertisers that are unsure about the effects of Facebook Inc (NASDAQ:FB) ads have not tried publishing Facebook ads yet. Those who try it seem to be more or less satisfied, and chances are high that they will increase their Facebook ads budget. Because of this trend, BIA Kelsey forecasts $11 billion of social ad spending in 2017 in the U.S., which is $4.7 billion more than last year.

LinkedIn Corp (NYSE:LNKD) is probably the best monetized social network at the moment because it not only relies on advertisements. It gets money from its Talent Solutions division and also from its premium accounts. Unfortunately, the stock is overvalued. To support the current market valuation, LinkedIn Corp (NYSE:LNKD) would need extremely high annual growth rates, in the 30% range, for the next five years. Is this really feasible? The latest figures show that user base growth is moderate. As a consequence, revenue continues to increase but the growth rate of revenue is decreasing. This trend is clearly not sustainable.

Renren Inc (NYSE:RENN) is losing money, but it is also making progress in its monetization approach. Recently, it beat the Street’s consensus, although expectations were very low, and eventually it will likely turn a profit. It also has other products that add diversity: mobile games, discounts and even video streaming. My main worry is related to the social network business: Renren is experiencing a decrease in the growth rate of its user base. It used to gain 8-12 million new users per quarter. But in the last quarter, it only gained 6 million. The upside is that most users are students. In the short run, this may not be so good for monetization, but in the future, students will start working and, as long as they continue using Renren, could become an excellent target for online advertisement.

SINA Corp (NASDAQ:SINA) not only owns sina.com — one of the most popular media sites in China — but also Weibo, which has experienced massive user growth in the past two years. Weibo is the Chinese equivalent of Twitter. Although it was founded three years after Twitter, it reached 324 million users in China alone by June 2012, compared with 500 million worldwide for Twitter. It allows users to write 140 Chinese characters, about 70-80 words, which means, as Business Insider mentions, that messages “carry a lot more depth.”

SINA can be considered a social network stock in the making, because eventually Weibo will replace sina.com as the main revenue component. SINA’s cash cow is advertising revenue from sina.com and Weibo. In 2011, it reached $370 million and this year SINA may obtain more than $500 million only from ads. According to the latest earnings call, net revenue for this year is so far $126 million, representing 19% growth year over year. $19 million came from Weibo alone.

If you remove Weibo’s contribution, advertisement revenue would have declined by 4%. This shows that although Weibo’s contribution is still small, it is the main revenue growth driver. Notice also that Weibo contributed significantly to non-advertising revenues: $5 million in gaming fees and $2 million in membership fees, thus helping to make revenue more diversified. SINA has also entered into a partnership with Alibaba to further strengthen Weibo’s monetization.

According to the latest earnings call, non-GAAP advertising gross margin for the first quarter was 50%, up from 45% for the same period last year. This reflects the scalability of SINA’s advertising model. The downside is that non-GAAP operating expenses for the first quarter of 2013 were $69.8 million compared to $64.1 million for the same period last year.

After analyzing four social network stocks including the extremely popular Facebook and LinkedIn Corp (NYSE:LNKD), I recommend SINA as the best pick in terms of expected return and limited downside risks. Facebook and LinkedIn Corp (NYSE:LNKD) are more popular in North America but they already own superb products. SINA, on the other hand, represents a success in the making: it owns Weibo and due to the amazing growth rate it has experienced in its user database, it is realistic to assume that in the next years it will become the main revenue growth driver. Furthermore, considering that the company is still experimenting with various monetization approaches (and already seeing some success), I believe that there is a lot of room for improvement in terms of margins. A Weibo IPO is not hard to imagine, considering that it is the main revenue growth driver at the moment. If Weibo obtains a moderate 30 times sales valuation at the IPO, it could be worth $6 billion, assuming that annual revenue will come out at $200 million this year. SINA will retain 70%, which is more money than its current market capitalization.

Also, notice that unlike LinkedIn Corp (NYSE:LNKD), SINA is not overvalued, and unlike Facebook, SINA is prepared for mobile. As advertisers shift from the web to mobile apps, Weibo will become a cash cow in SINA’s portfolio. Finally, unlike Renren, SINA is profitable and owns a respected and well-monetized media site, which limits downside risks.

The article Choosing the Best Social Network Stock originally appeared on Fool.com and is written by Adrian Campos.

Adrian Campos has no position in any stocks mentioned. The Motley Fool recommends Facebook, LinkedIn, and SINA . The Motley Fool owns shares of Facebook and LinkedIn. Adrian is a member of The Motley Fool Blog Network — entries represent the personal opinion of the blogger and are not formally edited.

Bet on Google Inc (GOOG) as a Next Generation Utility

Contour Will Be Screaming for Yelp Inc (YELP)