Apple could overcome this obstacle by performing a simple share split, trading every current stub for something like five or 10 new shares. It’s a common enough maneuver, and one that doesn’t really change anything about the stock’s total value or the underlying business. Apple hasn’t done a split since 2005, but if the Dow’s steering committee called Apple’s board up with a tit-for-tat proposal, I’m sure Cupertino could break up its shares to fit better on the Dow.

But then there’s the second half of the answer, which brings us right back to where we started: The Dow doesn’t like change. Apple looks pretty awesome right now, but what if it’s just a flash in the pan?

Sure, Apple has more than 30 years of operating history to fall back on. But only the last 10 years or so qualify as a Dow-style success story. And Apple works in a notoriously volatile industry. Less than five years ago, Canadian smartphone veteran BlackBerry Ltd (NASDAQ:BBRY) (nee Research In Motion) sported a market cap nearly the size of Apple’s. But then Apple took off on the back of iPhones and iPads, while BlackBerry Ltd (NASDAQ:BBRY) missed the boat, and the Canadians are now looking for an exit strategy. 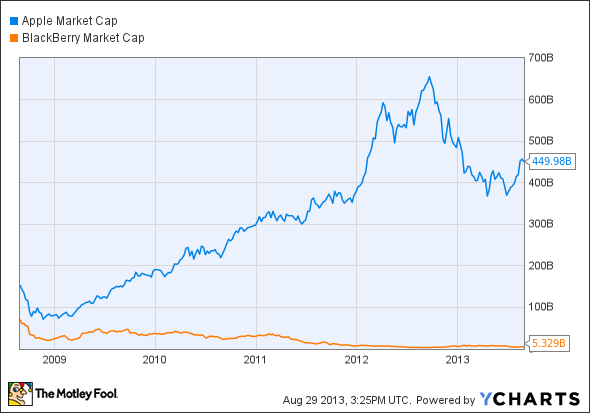 Who’s to say that this won’t happen to Apple in the next unforeseen mobile revolution? This is the second, and probably more important reason why the world’s biggest, baddest stock still isn’t on the Dow. The uncertainty regarding CEO Tim Cook’s ability to keep the creative juices flowing in Cupertino only add to the burden of proof.

If Apple can deliver some serious innovation under Cook and stay this big, this efficient, and this important for another five years or so, I’d wager that we’ll see a quick stock split that lets Apple enter the Dow. But not now. Cook must prove that he and his company belong in the market’s most elite club.

The article What Would It Take to Get Apple in the Dow? originally appeared on Fool.com and is written by Anders Bylund.