ETF Stats for September 2012 – Largest Decline In Listings Ever

The quantity of ETP listings at the end of September was 18 fewer for the month and 20 fewer for the quarter, the largest declines ever.  The one-month closure tally of 24 also established a new record.  The current ETP listing count now stands at 1,456 and consists of 1,252 ETFs and 204 ETNs.  As stated a month ago – the consolidation has begun.

It’s not just due to the fact that closures have jumped – declines in new product launches are also a factor.  The 61 new products coming to market during the past half year is the lowest 6-month count since October 2009.  Only six new ETPs (five ETFs and one ETN) arrived on the market in September, the second month in a row for such a low total.

There are no signs of improvement either.  October will set another new record for closures with 29 liquidations already announced.

Many ETF reports would lead you to believe Russell has already closed 25 ETFs this year, pushing the year-to-date closure count above 80.  However, the reality is no Russell ETFs have been closed or liquidated yet.  Back in August, Russell “announced plans” to close and liquidate all ETFs but one in its product line.  Those plans provided for the continued listing and trading of the affected ETFs through October 16.  The 25 Russell ETFs are still in existence today, so don’t count your de-listings before they close.  The year-to-date actual closure count now stands at 59.

The spike in closures and resulting product consolidation are not signs of industry weakness.  Quite the opposite, they are traits of a healthy industry.  Not every product will be a winner.  A thoughtful pruning process is both necessary and beneficial.

Increasing assets under management is evidence of health, and assets grew another 5% in September to about $1.3 trillion.  The number of funds with more than $10 billion in assets rose from 24 to 28.  ETPs exceeding the $1 billion threshold climbed from 166 to 173.

Trading activity finally picked up after months of declining results.  Total dollar volume climbed back above $1 trillion, even though September had 17% fewer trading days than August (19 versus 23). SPDR S&P 500 (NYSEARCA:SPY) fell short of being responsible for a third of all ETP trading for the first time in memory.  It managed to capture “only” a 33.2% share.

ETPs averaging more than $1 billion per day in trading added one member to their ranks and captured 53.4% of all ETP trading activity.  Products averaging more than $100 million per day surged from 53 to 73 while capturing 88.0% of trading activity.  The quantity with more than $10 million of daily trading also increased, jumping from 208 to 236 while grabbing 97.3% of trading dollars.  Unfortunately, that means the remaining 1,200+ products, about 84%, had to fight for the last 2.7% of trading scraps.  While the overall ETF industry is healthly, it’s clearly a case of the haves and the have-nots. 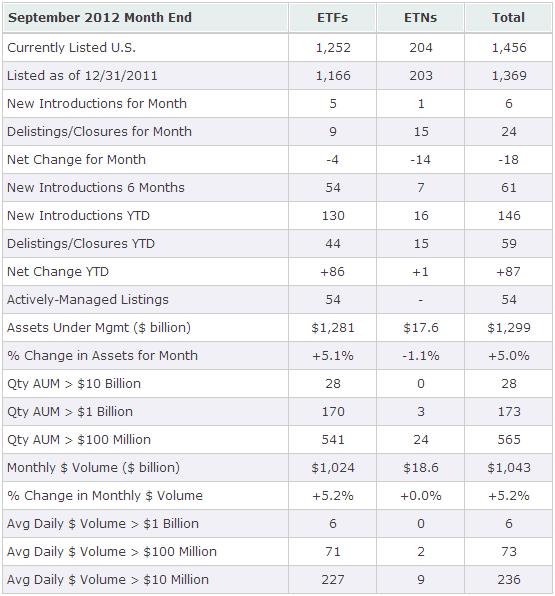 Data sources:  Daily prices and volume of individual ETPs from Norgate Premium Data.  Fund counts and all other information compiled by Invest With An Edge.

How to Build a Black Swan Hyperinflation Portfolio