Columbia Partners, an Investment Management firm, had assets of $2.1 billion under management in its equity segment as of March 31, 2013. The firm focuses on those securities which it thinks can outperform the broader market in the long run. This active investment management process followed by Columbia Partners makes each of its stock picks a must watch for investors. Therefore, I have analyzed Columbia Partners’ top three holdings.

A company for income investors

Core Laboratories N.V. (NYSE:CLB)’ reservoir description segment reported revenue of $125 million in the first quarter of 2013, showing a growth of 8% on a quarter-over-quarter basis. This segment is engaged in global deepwater hydrocarbons and crude oil well development.

The increase in the global exploration activities, which the company expects to be 7% higher than last year, and the increase in production spending by oil producing companies is expected to benefit Core Laboratories N.V. (NYSE:CLB) in 2013 and 2014. The company is currently working on 40 international deepwater wells in the lower tertiary of the Gulf of Mexico, Europe, Africa, South America, and the Mediterranean Sea. These engagements are expected to generate high revenue in 2013 and 2014.

The company is expected to generate revenue of $525 million this year, up from $496 million last year.

Analysts expect Core Laboratories N.V. (NYSE:CLB) to buy back 1.5 million shares and declare a dividend of $1.29 per share in 2013, compared to $1.11 per share last year, and an expected dividend of $1.56 per share in 2014. This shows consistent effort from the company to distribute the profits to its shareholders. In the first quarter, the company returned almost $62.5 million to its shareholders through dividends and share repurchases.

Moving forward, the company is expected to generate free cash flow of $269.3 million in 2013, an increase of $32.3 million from last year. These levels of cash provide certainty that the company will distribute profit to its shareholders as expected. Therefore, this stock is an attractive opportunity for regular income seeking investors.

Recently, EPR Properties (NYSE:EPR) expressed its interest to acquire a company that owns 11 theater properties in the U.S. These 11 theaters have a total of 139 screens. The deal is valued at $117.7 million. IBISWorld, an Australian research company, expects revenue of U.S. movie theaters to grow at a rate of 2% in 2013, up from 1.1% in 2012, in response to an increase in consumer spending.

Also, the U.S. movie theater industry is expected to generate total revenue of $14.5 billion this year, from $12.9 billion last year. Thus, theater operators are now concentrating on large megaplexes, where operating cost per seat can be reduced due to higher admissions. Therefore, the profit margin is expected to be 4.2% this year, compared to an average of 2%-3% in the last three years. 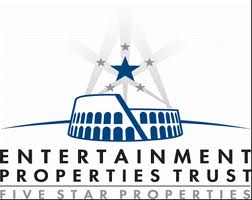 Do Hedge Funds and Insiders Love Equity One, Inc. (EQY)?