America’s utilities are starting to be supplemented by rooftop solar systems. Instead of facing competition from a select number of other large utilities, now utilities are facing millions of potential competitors. Some utilities are working proactively to deal with these challenges, but others should be avoided.

Edison International (NYSE:EIX) bought the rooftop solar developer SoCore Energy. It is important to note that Edison did not simply buy a collection of solar panels out in the desert; it bought a piece of the distributed generation market. With Edison’s experience and its BBB debt rating, it will be able to funnel relatively cheap capital to boost SoCore’s operations. Rooftop solar systems mean the destruction of the status quo where demand for Edison International (NYSE:EIX)’s electricity grew in a steady and dependable fashion, but Edison can use SoCore to recoup some of its lost profits.

Challenges with the Onofre nuclear plant will put a dent in Edison’s earnings. The company is big, but a $4.1 billion price tag is still a hard pill to swallow. Also, the growth of distributed generation is forcing the company to lay down $17.8 billion to $20.3 billion in capital expenditures from 2013 to 2017, mainly in distribution and transmission upgrades. Do not expect a large amount of earnings growth in the coming years. Thanks to these costs it is expected to earn around $3.38 per share in 2013, $0.46 less than what it earned in 2010.

Don’t expect PG&E Corporation (NYSE:PCG)’s earnings growth to be very strong. Thanks to network upgrades and rising energy prices, its expected 2013 EPS of $2.63 is a full $0.24 less than what it earned in 2010.

NRG Energy Inc (NYSE:NRG) is a large utility with over 46 gigawatts of generational capacity, and it has a strong interest in the renewable rooftop market. Through its NRG Energy Inc (NYSE:NRG) solar subsidiary it has helped more than 141,000 homes install rooftop solar systems. NRG’s willingness to embrace rooftop solar along with traditional utility scale solar installations is encouraging, because it shows that the company is willing to work with the market. It is important to remember that a full 46.8% of NRG Energy Inc (NYSE:NRG)’s generational capacity is on the East Coast, where relativity low solar radiation makes distributed solar less threatening.

NRG Energy Inc (NYSE:NRG) does own 44% of the South Texas Project nuclear plant, but the facility is operating and does not carry the headaches of the Edison’s Onofre plant. Thanks to its forward looking policies, NRG Energy Inc (NYSE:NRG) has been able to grow its customer base for 10 consecutive quarters. Mild weather has put a dent in its earnings this year, but by 2014 it is expected to boost its EPS to $1.42 thanks to solar growth and stronger overall energy demand.

Stuck between a rock and a hard place
SolarCity is a dedicated solar installer under attack. Now that utilities are starting run subsidiaries that purchase, install, and operate rooftop solar systems, SolarCity is facing a huge increased competition from very well financed firms. 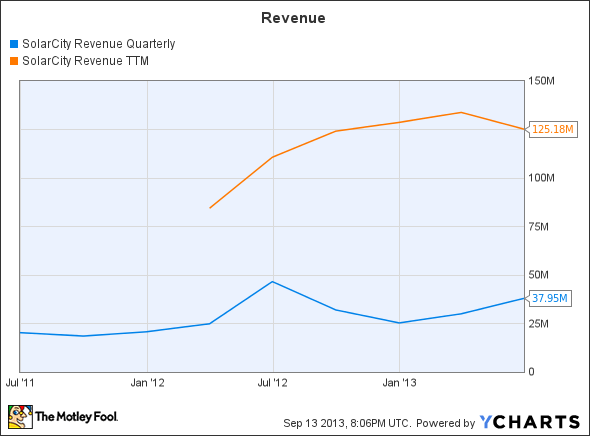 SolarCity is growing with 53 megawatts deployed in the second quarter of 2013. The company expects to be cash flow positive by the last quarter of 2013. Even as the number of Megawatts deployed grows, its recent quarterly revenue only grew to $37.95 million. SolarCity is facing more competition from billion dollar utilities with better access to the capital markets and falling solar costs, thus putting pressure on prices.

Going forward SolarCity should become more profitable as existing customers become a larger portion of its revenue, but that does not erase the difficulties the company is facing from a maturing market. To try to gain more market share SolarCity recently acquired Paramount Solar, but it is still far from certain how things will play out.

Conclusion
The difficulties with the Onofre nuclear plant, big upgrades to the grid, and rooftop solar are expected to hurt PG&E Corporation (NYSE:PCG)’s and Edison International (NYSE:EIX)’s earnings for some time. Utilities are starting to realize that there may be no way they can stop rooftop solar, and they have joined the market. Now SolarCity’s prospects have also taken a turn south due to increased competition from well financed utilities. NRG Energy Inc (NYSE:NRG) is the one utility that is really worth taking a second look at, as it has embraced solar and is not stuck with an expensive nuclear decommissioning project.

The article Beware of the Rooftop Solar Market originally appeared on Fool.com and is written by Joshua Bondy.

Joshua Bondy has no position in any stocks mentioned. The Motley Fool owns shares of SolarCity.