In March 2013, eBay Inc (NASDAQ:EBAY) laid down aggressive targets for increasing its revenue. PayPal, which accounted for 40% of its 2012 revenues and reported 25% growth, will be the key factor in eBay’s future growth. But there’s also another factor: The company aims to drive this growth by expanding globally and luring customers through its mobile technology.

The company announced plans to achieve $300 billion in e-commerce volumes by 2013, representing a 70% increase from its 2012 numbers. It seems to be on the right track to achieve this target as seen from its recent first-quarter results. Its first-quarter revenues increased 14% to $3.7 billion and included a 19% increase in its e-commerce volumes driven by growth in its mobile business and international markets. Its plans include a 15% to 19% annual revenue increase and 69% revenue growth by the end of three years.

More than 50% of the company’s revenues are generated through its international markets. Further, international business accounts for more than half of PayPal’s total revenues.

According to CEO John Donahoe, the number of Internet users is going to double in the next two years and 78% of these new users will be from BRIC and emerging markets. 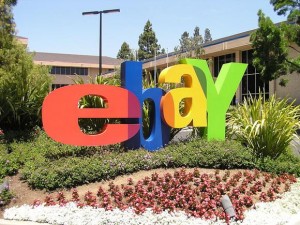 The company plans to tap this growing market and expects that by 2015, 25% of eBay Inc (NASDAQ:EBAY)’s active users and 12% of its global sales will come from these regions.

It is already serving the global markets, but there is still a lot of room to grow. The company is deliberately moving slowly in these regions as it tries to balance maintaining its margins and materializing the growth prospects.

One of the strong areas of growth in international regions is the increasing use of PayPal or other services. Currently, most of the transactions are done in cash in these regions. So as these economies improve and broadband access increases, there exists a huge growth potential to increase the use of PayPal. This will definitely help to reach its target of increasing its international sales by four times its current levels.

A recent example is the launch of eBay Inc (NASDAQ:EBAY)’s portal in Russia. The company has launched the Russian language portal and CEO Donahoe thinks that PayPal will help to overcome the payment difficulties that Russians face. Hence, apart from increasing its international reach, it will also benefit from the increasing rate of adoption of e-Wallet.

One area in which the company has met with great success is mobile and has even outperformed its archrival Amazon.com, Inc. (NASDAQ:AMZN). In 2012, eBay Inc (NASDAQ:EBAY) generated $27 billion in mobile commerce and expects mobile transactions to exceed $40 billion.

Another indicator of the company’s growth in e-commerce is its increasing downloads of suite mobile apps. Downloads for its apps have surpassed 162 million, adding 2.8 million new customers. This has helped to drive double-digit growth in active users in online retail platforms and PayPal.

The mobile-commerce market is expected to grow from $3.4 billion in 2010 to $119 billion by 2015 and eBay Inc (NASDAQ:EBAY) is well positioned to take advantage of the growth in the e-commerce universe.

Combining its two key initiatives, mobile and international expansion, it launched its mobile-payment solution for small business, PayPal Here. It is now available at more than 2,700 SoftBank locations across Japan and also plans to roll out the chip and PIN version of PayPal in the U.K.

International revenue rose 16% versus 31% last year. The main area of concern was Europe. Amazon also struggled to grow in China and mentioned that it was still in investment mode in the region.

Related Insider Monkey Articles
Facebook Inc (FB): This Was A Smart MoveNetflix, Inc. (NFLX): A Look At Its Peers

Amazon.com, Inc. (AMZN): Get A Load Of This Smartphone Tech!Apple Inc. (AAPL)’s Next Disruptive Move