Discount retailer Dollar General Corp. (NYSE:DG) has been resilient over the past five years. Since going public near the end of the Great Recession in 2009, its stock has risen 140% from its IPO price of $21. The company, along with its industry peers Dollar Tree, Inc. (NASDAQ:DLTR) and Family Dollar Stores, Inc. (NYSE:FDO), have grown their top and bottom lines much more impressively than their superstore rivals Wal-Mart Stores, Inc. (NYSE:WMT) and Target Corporation (NYSE:TGT).

As the threat of possible future tax hikes hangs by a thread over the American consumer, should investors consider investing in Dollar General and its peers to weather the storm? 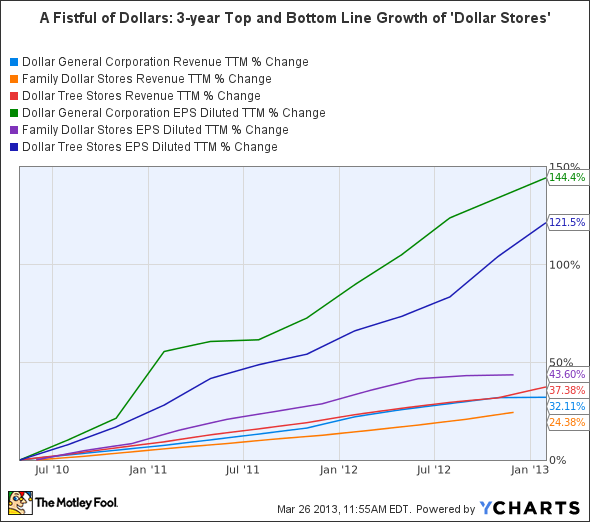 Thomson Reuters analysts had forecast earnings of $0.90 per share on revenue of $4.26 billion. Although sales came in lighter than expected, Dollar General’s robust profit growth was enough to spur shares to rally nearly 6% during intraday trading after the company reported earnings on March 25.

Dollar General attributed its strong fourth quarter to strong demand for packaged food, cigarettes, and other products, even as worries regarding the payroll tax hike and tax refund delays undermined investor confidence in the retail sector. Even discount superstore Wal-Mart, once considered a recession-proof business, was taken down a notch after it reported lackluster earnings last month.

Dollar General Corp. (NYSE:DG) offers approximately 25% of its items at $1 or less, and charges less than $25 for most of its products.

During the quarter, the company reported stronger sales of soft drinks, snacks and frozen food. Demand for healthcare items also rose as a result of the flu season. Consumables such as food and medicine traditionally comprise more than 70% of Dollar General’s total sales.

In other words, Dollar General is posting strength where it matters the most, but reporting losses in other areas more impacted by macro economic woes. Its losses in other departments were caused by steeper discounts implemented to remain competitive with superstores such as Wal-Mart during the holiday season. Despite these discounts, the gross margin rose 30 basis points to 32.5%.

Borrowing from the playbook of large grocers such as The Kroger Co. (NYSE:KR) and Safeway Inc. (NYSE:SWY), Dollar General is offering more of its own higher-margin private label products, which are sold at lower prices to consumers. The company has also increased the amount of branded goods, such as H.J. Heinz Company (NYSE:HNZ) ketchup and Tide detergent, it sells, in a bid to rival the selection of larger superstores.

Sales of tobacco products, which have started at select locations, also surged 33% higher than Dollar General Corp. (NYSE:DG)‘s own estimate. Strong demand for tobacco has helped grow revenue at the expense of margins, since tobacco products sell at lower margins. Sales of beer and wine also rose. The company considers this an area of potential growth, since 60% of its stores are located in areas where beer and wine sales are permitted, but only 40% of the locations have alcohol sales licenses.

Both store traffic and the average cost per transaction rose. Same-store sales rose 3.0%, easily topping the 1% that Wal-Mart reported in the fourth quarter, but missed the 3.6% analysts had been expecting.

Looking ahead, Dollar General, which operates 10,500 stores in the United States, intends to match last year’s addition of 625 new stores to continue growing. The company has a stated goal of increasing its square footage by 7%, in line with its growth rate over the last two years.

The company intends to strategically expand into lower income neighborhoods, since those shoppers are less likely to drive farther for groceries if gasoline prices rise. Avondale Partners analyst Mark Montagna notes that according to his firm’s research, prices of the same items are “exactly comparable” to those from Wal-Mart, so the choice comes down to which store is within a closer driving distance. Therefore, the strategic placement of stores in relation to Wal-Mart, Target or Costco Wholesale Corporation (NASDAQ:COST) stores is of paramount importance.

In addition, the company intends to add Dollar General Corp. (NYSE:DG) Market to its locations, a larger store that also offers fresh fruit, vegetables and meat. These new stores will likely perform well, since customers are more likely to eat at home in times of decreased discretionary spending. This strategy will also help Dollar General to slowly evolve from a thrift store into a full supermarket.

As a result of these new growth initiatives, Dollar General expects to have a fairly rosy fiscal 2013, with earnings of $3.15 to $3.30 per share, in line with the consensus estimate of $3.27 per share.

Revenue is expected to rise 10% to 12%, compared to a full year gain of 8.2% in fiscal 2012. Same-store sales are expected to rise 4% to 6%, roughly in line with its full-year gain of 4.7%. The company expects to post slower growth in the first half of 2013, with growth picking up in the second half of the year, as the immediate effects of tax hikes diminish.

Let’s see how Dollar General stacks up to its rivals Family Dollar and Dollar Tree, Inc. (NASDAQ:DLTR) Stores, as well as superstore Wal-Mart, on a fundamental basis.

While Wal-Mart is the cheapest stock fundamentally, it is absolutely dominated by dollar stores in other growth categories. Out of the three dollar stores, Dollar Tree, Inc. (NASDAQ:DLTR) is the strongest fundamentally, with the lowest debt, strongest profit margins and most robust top and bottom line growth. Dollar General Corp. (NYSE:DG) comes in at a close second in most categories except for its higher debt, and Family Dollar is the weakest, with negative earnings growth and the slimmest margins.

In my opinion, the numbers speak for themselves – investing in dollar stores is a viable alternative to massive superstores like Wal-Mart. With a more flexible business model, strong past performance during economic downturns, a keen eye for strategic expansions and aggressive initiatives to match Wal-Mart’s prices dollar for dollar, I’d say that Dollar General and its industry peers are worthy investments.

The article Will Dollar General Make Investors ‘Fistfuls of Dollars’? originally appeared on Fool.com and is written by Leo Sun.