Published on October 29, 2015 at 3:10 pm by Sure Dividend in Dividend Stocks, News, Stock Analysis

Cardinal Health Inc (NYSE:CAH) is a large pharmaceutical and medical products distributor. The company generates sales of over $100 billion a year.

Cardinal Health was found in the equity portfolios of 45 elite investors that we monitor within our database, who held nearly $951 million worth of the company’s shares, equal to 3.40% of its outstanding stock. Sentiment among those investors was relatively unchanged during the second quarter. Top shareholder Cliff Asness of AQR Capital trimmed his stake by 11% to 2.12 million shares, while Steven Richman’s East Side Capital maintained its 1.69 million-share position throughout the quarter.

The image below gives an overview of Cardinal Health’s operations: 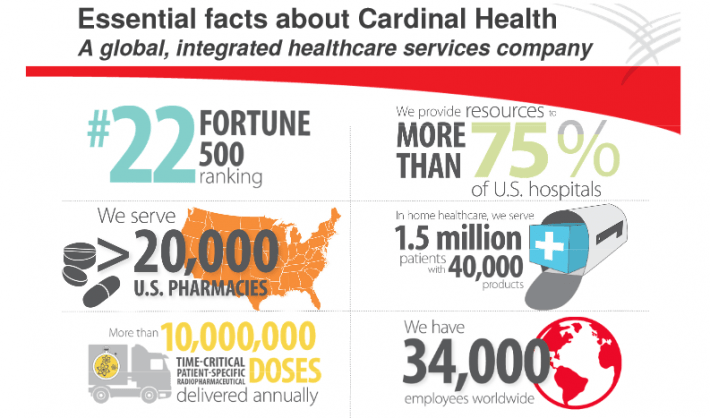 Cardinal Health operates in two segments; pharmaceutical and medical. Each segment’s percentage of total company operating income in fiscal 2015 is shown below:

The pharmaceutical segment generates the majority of its profits from distributing generic and branded pharmaceuticals as well as over-the-counter healthcare and consumer products in the United States.

The medical segment distributes gloves, gowns, drapes, and other medical supplies for use in various health care facilities.  The segment also manufactures a wide range of its own products for distribution in the United States, Canada, and China.

The company generated over $100 billion in revenue over the last 12 months, primarily from the consolidation and distribution of generic pharmaceuticals and medical products.

Cardinal Health Inc (NYSE:CAH) operates in a low margin industry. The company’s net profit margin in 2015 was 1.2%. Profit margins have been below 2.0% for the last decade. Few companies operate on such razor thin margins as Cardinal Health.

The low margins in the pharmaceutical and medical supply industry mean less efficient players cannot compete.  Cardinal Health’s competitive advantage is based on its large size and scale.

The low-tech scale and price advantage that Cardinal Health has over competitors creates an extremely durable competitive advantage that is unlikely to be diminished for a very long time.