A handful of large, multi-national corporations dominate the energy industry. Only 2 are Dividend Aristocrats (S&P 500 stocks with 25+ years of rising dividends): 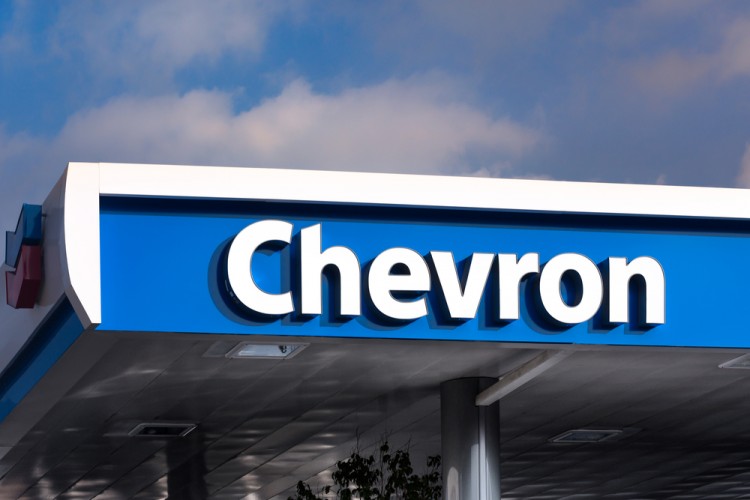 Both of these companies were born out of the split-up of Standard Oil in 1911. This makes them in some ways ‘sister companies’. 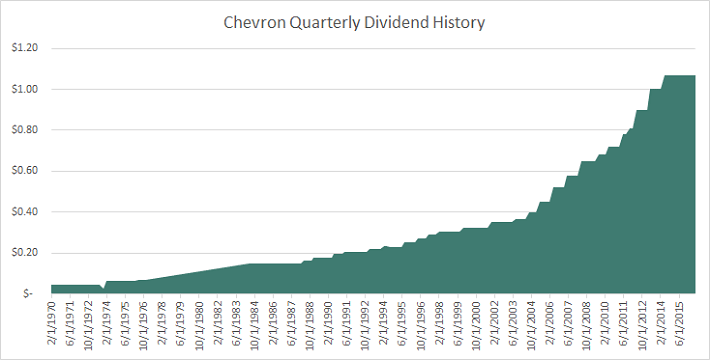 While Chevron’s dividend history is impressive, the past two years have not been kind to Chevron because of the huge decline in oil prices.  Despite these declines, Chevron has still outperformed the market over the last decade. 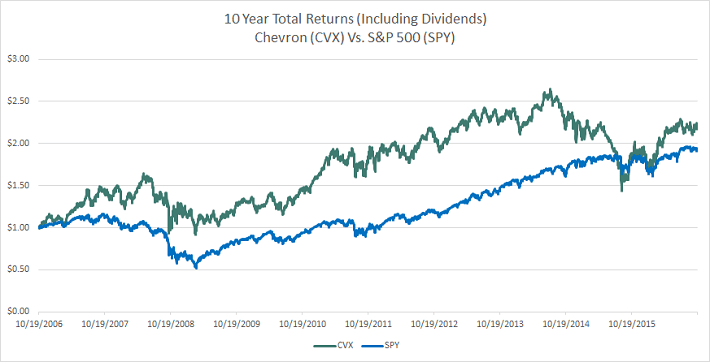 As an integrated major, Chevron has a diversified business model which is helping blunt the blow of low oil and gas prices.

And, it has several major projects set to ramp up going forward. These will help the company remain profitable and protect its high dividend yield of 4.2%.

Keep reading this article to learn more about the investment prospects of Chevron stock.

The upstream segment is composed of the company’s exploration and production activities. This business segment is reliant on supportive commodity prices. Not surprisingly, the upstream side of the business is getting hit hard by the decline in oil and gas prices over the past two years.

Chevron lost $1.9 billion in its upstream business in 2015, compared with a $16.9 billion upstream profit the year before.

The good news for Chevron is that its downstream segment helped offset some of these losses. Chevron’s downstream unit generated $7.6 billion of earnings last year, which was a 75% year over year increase. This is the biggest benefit of being an integrated major. When oil prices decline, upstream profits collapse. But the trade-off is that downstream profits typically increase during periods of falling oil prices. The downstream business includes refining, which actually benefits from lower oil prices because it reduces refining feedstock costs. A reduction in costs helps widen refining profit margins.

Overall, Chevron earned $4.5 billion in 2015, thanks to significant cost cuts. Chevron spent $40 billion in 2014 on total exploratory and capital spending. It plans to spend $25 billion-$28 billion this year, and further reduce 2017 and 2018 capital expenditures to $17 billion-$22 billion. 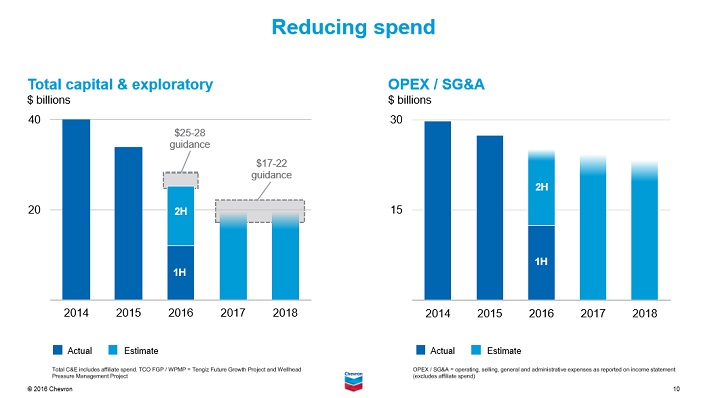 However, continued deterioration of the upstream segment is having a significant effect. Chevron’s upstream business represented 88% of its 2014 earnings. The impact has lasted into 2016. Over the first half of the year, Chevron lost $2.1 billion, due to a $3.9 billion loss in upstream activities.

As a result, the company needs a higher oil price to return to consistent profitability.

The most important growth catalyst for Chevron would be a higher oil price.

While oil has rallied off its 2016 low of $27 per barrel in the United States, it is still approximately 50% off of its 2014 high of ~$100 per barrel. Unfortunately, Chevron cannot control the direction of oil prices. But it does have its own growth prospects, which are its upstream projects.

Two of the most important projects for Chevron are its liquefied natural gas fields in Australia, named Gorgon and Wheatstone. Collectively, these two projects hold capacity of more than 24 million tonnes of annual gas production.

Chevron saw first production from Gorgon last quarter, and Wheatstone is nearly complete. These projects are likely to see considerable demand, as they are optimally located to serve the Asian markets, where energy demand is booming. 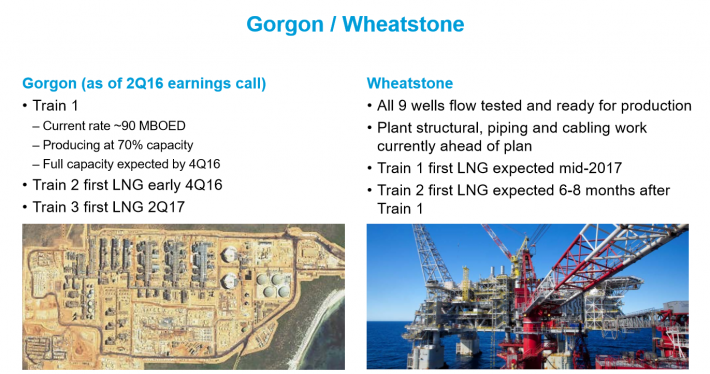 When these projects are fully on-line, they will start contributing cash flow of their own, and will no longer require capital expense to build.

Chevron’s earnings are more volatile than most Dividend Aristocrats because of its reliance on oil prices. This makes earnings-per-share growth a poor gauge of the company’s long-term success. The company’s dividend growth and book-value-per-share growth over the last decade are shown below:

Chevron has managed to compound shareholder wealth at impressive rates over the last decade – over a wide variety of economic conditions. The company’s management has excellent capital allocation skill.  Chevron has repurchased around 2% of its net shares outstanding a year over the last decade. These repurchases are in addition to large dividend payments.

Going forward, I expect Chevron to grow its per share value at around 5% a year. Growth will come from production increases, efficiency improvements, and share repurchases.  The company is expecting volume growth of 0% to 4% a year over the next several years. 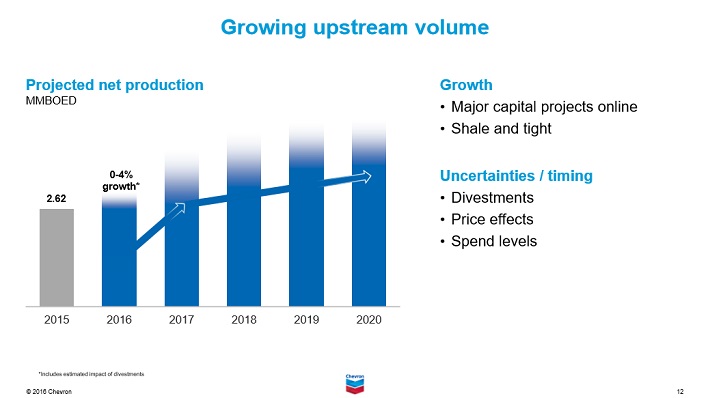 Major oil corporations get massive government subsidies because energy production is a ‘national interest’. The largest oil corporations (like Chevron) have a history of working with the United States government. Chevron has a significant and lasting competitive advantage by having influence over and relationships with the most powerful organization in the world, the United States government.

In addition to its government based competitive advantage, Chevron is also a low-cost producer of oil and natural gas. Chevron’s large size allows it to invest in the largest and most profitable oil and gas ventures. Chevron regularly partners with other major integrated oil and gas corporations to tackle extremely large projects together; spreading capital expenditures over several companies and sharing in the rewards. This reduces the risk of the company’s portfolio while still taking upside in projects throughout the world.

In short, Chevron has the connections and size to take on the largest and most profitable oil and gas projects, both upstream and downstream.

Recent oil price declines have been even more severe. Still, the company is committed to paying its dividend.  Chevron shareholders should not expect a dividend cut.

Chevron is still one of the most conservatively financed large oil corporations, as the image below shows.

Chevron still has significant capacity to add billions in debt if need be. Additionally, the company’s cash flow from operations currently cover Chevron’s dividends. The company is also engaging in selling off assets to raise cash.  While this isn’t ideal, it also shows Chevron’s management is firmly committed to rewarding shareholders with dividends.

Earnings should normalize once oil and gas prices recovery. Chevron stock trades for a price-to-earnings ratio of 7.6 based on its 2012 peak earnings-per-share. This implies the stock is undervalued if the company can meet its full earnings potential. Multiple expansion could drive significant future returns.

In addition, Chevron’s future returns will be augmented by its 4.2% dividend yield.

Chevron operates in a cyclical industry and is suffering through a steep downturn. But the company is adept at cutting capital spending effectively, and it has also curtailed share repurchases.

This has helped the company continue paying dividends through the oil crash. If oil prices continue to recover, Chevron stock could deliver double-digit returns through earnings growth. its 4.2% dividend yield, and valuation multiple increases.

Like almost everything in finance, oil prices are mean reverting.  They will correct upward.  When they do, Chevron shareholders will likely do well. In the meantime, investors get ‘paid to wait’ with the company’s 4.2% dividend yield.

Note: This article is written by Bob Ciura and originally published at Sure Dividend.

Stag Industrial Inc (STAG)’s Big Dividend: A Unique Risk Worth Considering...
Monthly Newsletter Strategy
Download a free copy of our newsletter and see the details inside!
Hedge Fund Resource Center
Related News
Here’s Why Hortonworks, Talend, Deutsche Bank, and More Are in the Spotlight Here’s Why These Five Stocks Are In the Spotlight Chevron Corporation (CVX): How Safe is the Dividend? Why Viacom, Facebook, Tesla, and Two Other Stocks are in Spotlight Today The Smart Money Loves These Dividend Aristocrats: Wal-Mart, Chevron, More Why Lexmark, Chevron, Canadian Solar, JinkoSolar and More Are Making Headlines Why Chesapeake, ITI Inc, Pier 1, BP, and Chevron are in the Spotlight 12 Famous Paintings with The Stories Behind Them 7 Most Successful Independent Rappers in the World 10 Most Successful and Influential Lawyers in 2016
Billionaire Hedge Funds