Herbalife’s total short interest as of November 30th was 20.72 million shares, or 21.1% of the company’s outstanding float.

In the first two-week filing period of May, short interest in the stock nearly doubled from 6.34 million shares to 11.82 million shares. David Einhorn’s questions about Herbalife’s distributor disclosure policy, which prompted a selloff of more than 20% in the stock, occurred on May 1st.

The reason that this data is significant is because if Ackman’s disclosure that Pershing Square owns “over 20 million shares” is correct, it indicates that one of the two following scenarios must be true:

1) Bill Ackman is the only hedge fund manager initiating a short sale of meaningful size at the moment, and his 20M-share position was fully established by November 30th.

2) Bill Ackman’s 20M-share position was fully reached in the first two weeks of December, leading up to the Sohn Conference. If this is the case, then other short sellers are in the picture, but Ackman’s position dwarfs them significantly.

If scenario No. 1 is correct, rumors of short positions by David Einhorn (see Einhorn’s top stock picks) and Jim Chanos (see Chanos’ long-only positions), which have been making their way around the media, simply aren’t true.

Keep in mind that in April, the total short interest in Herbalife was between 5 and 6 million shares, which indicates that if scenario No. 2 is correct, the maximum size of the position held by other short sellers is about one-fourth the size of Ackman’s.

Considering the latter scenario, we have no way to determine who the other short sellers are, but it is obvious that other short sellers have much smaller positions. Obviously, this is assuming that Ackman’s position was taken in early May, which would line up with his CNBC interview.

So what about those pesky put options?

In Michael Johnson’s interview last Wednesday, the Herbalife CEO also said that “an extraordinary number of puts on our stock were due to expire” last Friday, the day after Ackman’s presentation.

Johnson added, “this activity was pegged at some kind of ‘significant event.’”

While we can’t discern who held the alleged puts, our database of hedge funds’ 13F filings indicates that Ackman, Einhorn, and Chanos did not hold any at the end of the third quarter.

Amid Bill Ackman’s statement that he will give his own personal profits to charity, his share disclosure tells us that the gains from his short position eclipsed at least $300 million after Herbalife’s close on Monday.

According to his presentation, Ackman holds a $0 price target on his short position; we don’t expect Herbalife’s total short interest to decline anytime soon. 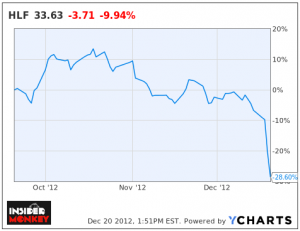 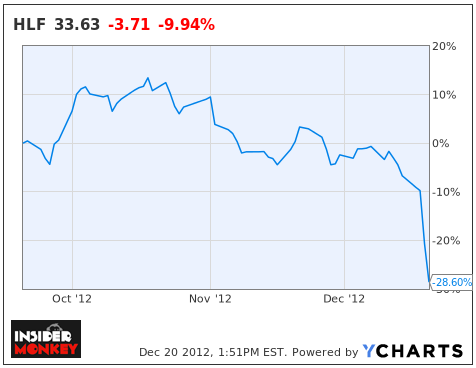 Ackman Has Made At Least $250M From Herbalife Ltd. (HLF) Short, Will Give His...