Is Constellium NV (NYSE:CSTM) worth your attention right now? The smart money is turning bullish. The number of long hedge fund bets moved up by 4 recently. At the end of this article we will also compare CSTM to other stocks including ChipMOS Technologies (Bermuda) Ltd (NASDAQ:IMOS), Green Plains Partners LP (NASDAQ:GPP), and HomeStreet Inc (NASDAQ:HMST) to get a better sense of its popularity.

Keeping this in mind, we’re going to analyze the key action regarding Constellium NV (NYSE:CSTM).

At the end of the third quarter, a total of 32 of the hedge funds tracked by Insider Monkey were long this stock, a gain of 14% from the previous quarter. With the smart money’s capital changing hands, there exists a select group of notable hedge fund managers who were upping their stakes considerably (or already accumulated large positions). 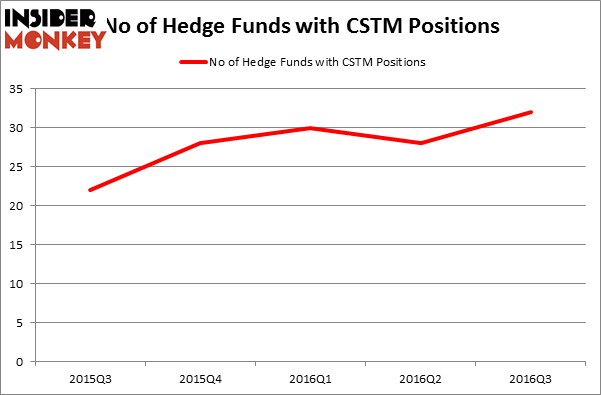 As you can see these stocks had an average of 10 hedge funds with bullish positions and the average amount invested in these stocks was $77 million. That figure was $284 million in CSTM’s case. ChipMOS Technologies (Bermuda) Ltd (NASDAQ:IMOS) is the most popular stock in this table. On the other hand Green Plains Partners LP (NASDAQ:GPP) is the least popular one with only 5 bullish hedge fund positions. Compared to these stocks Constellium NV (NYSE:CSTM) is more popular among hedge funds. Considering that hedge funds are fond of this stock in relation to its market cap peers, it may be a good idea to analyze it in detail and potentially include it in your portfolio.