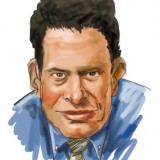 Billionaire Ken Fisher manages Fisher Asset Management and also runs a regular investing column for Forbes, which an internal review at the magazine has found tend to produce market-beating stock picks. The fund also files a 13F with the SEC after each quarter, which discloses many of its long equity positions. By comparing Fisher’s holdings from the end of September with those from the end of July, we can pick out stocks that were added to the portfolio during the third quarter. Read on for our quick take on the five largest new positions in Fisher’s 13F or see the full list of the fund’s stock picks.

Fisher and his team liked Comcast Corporation (NASDAQ:CMCSA), reporting a new position of almost 12 million shares in the cable company and owner of NBC Universal. Comcast trades at 17 times earnings, on either a trailing or a forward basis, and given the substantial growth in revenue and earnings that it has been experiencing it could be a good value at that price. Fellow billionaire Ken Griffin’s Citadel Investment Group also moved heavily into Comcast during the third quarter, building from a small position in July to a total of 4.5 million shares by the end of September (check out more of Griffin’s stock picks).

Brazilian oil company Petroleo Brasileiro Petrobras SA (NYSE:PBR) was another of Fisher’s new picks. Petrobras’s stock has fallen 33% in the last year, partly due to lower oil prices and the resulting poorer economics for offshore drilling (offshore oil represents a large portion of Brazil’s reserves). Earnings were down in the third quarter versus a year earlier, even though revenue was up. However, the forward P/E of 7 is quite competitive with the valuations of other oil majors. For now we would still prefer the somewhat safer investments in BP or Exxon Mobil, but it might be good to watch for further developments in Petrobras.

Fisher bought shares of Toyota Motor Corporation (NYSE:TM), closing September with 4.7 million shares in its portfolio. Much of the attention in the auto industry has gone to GM (it’s one of the most popular stocks among hedge funds), but Toyota trades at 11 times forward earnings estimates and a five-year PEG ratio of 0.3. If the auto industry recovers strongly, then GM would probably end up being a better value, but Toyota would also be cheap in that scenario and is probably a more reliable stock for investors. Toyota’s financials have been up, but that is mostly because of poor performance a year ago after the Fukushima disaster interrupted its supplies and production.

Royal Bank of Canada (NYSE:RY) was another new position. The Canadian economy has been doing well in recent years, and in its most recent quarter the bank’s earnings rose 75% from their levels in the same period in the previous year. Royal Bank of Canada also pays a (pre-tax) dividend yield of over 4%. However, at 11 times consensus earnings for the next fiscal year it’s more expensive than many American banks, and the P/B ratio is 2.2. We’re pretty sure that at least a couple megabanks are better values, and probably some commercial banks as well.

The fund also liked $150 billion market cap pharmaceutical company Novartis AG (NYSE:NVS). Novartis could be a good pick for income or defensive investors, as its beta is 0.5 and it too pays a dividend yield of about 4%. Its business hasn’t been growing, with net income flat in the third quarter compared to the same period in 2011, but at least it is stable for now. Wall Street analysts expect better earnings numbers in 2013, but if we were going to consider buying the stock in value terms we would have to see better results from a currently no-growth stock with a trailing P/E of 1.

Billionaire Ken Fisher Thinks Pfizer Is Right For You