Telecom equipment maker Ciena Corporation (NASDAQ:CIEN) soared almost 14% after its third-quarter results and current quarter’s guidance trumped analysts’ expectations. The company has been on a terrific run this year with revenue, earnings, and stock all moving north. Given the strength that Ciena Corporation (NASDAQ:CIEN) is seeing in telecom spending, it won’t be surprising if the following chart continues it upward trajectory. 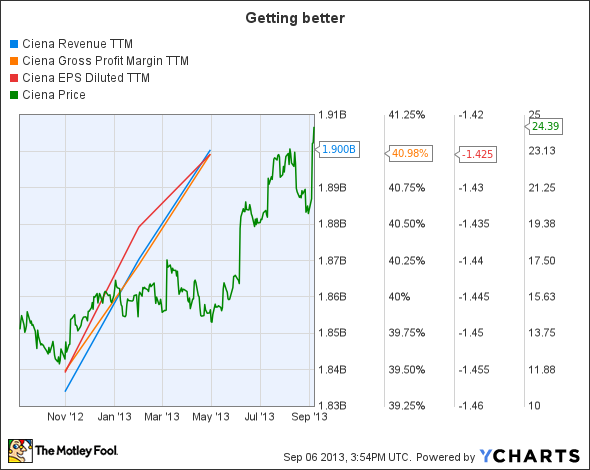 Ciena Corporation (NASDAQ:CIEN)’s management stated that order growth in the previous quarter outpaced sequential revenue growth of 6%, leading to a record backlog. This can be expected as Ciena counts major telecom carriers, such as AT&T Inc. (NYSE:T) and Verizon Communications Inc. (NYSE:VZ), as customers and it has also been entering new markets.

Some good moves
The company recorded design wins at several Tier 1 telecom customers across the globe, including Europe, Brazil, and India. Management is of the opinion that its customers are shifting to a new networking architecture and this will be a multi-year upgrade cycle.

Ciena Corporation (NASDAQ:CIEN) has also diversified its product lines. Aside from being a leader in Ethernet solutions and packet optical networking, Ciena is witnessing growth in network application software. Revenue from this business was up 50% in the first three quarters of fiscal 2013 as compared to the corresponding nine-month period last year.

Ciena is looking to make the most out of growth in “mobile data, business services and app-driven machine-to-machine connectivity.” This is why it is focusing on addressing the needs of the evolving network architecture and diversifying its portfolio to cater to different types of applications.

Benefiting from telco spending
Ciena is witnessing an uptick in carrier spending and that’s why its guidance of $550 million to $580 million came in comfortably ahead of the $551 million consensus estimate at mid-point. The order backlog that Ciena Corporation (NASDAQ:CIEN) has built so far seems to be translating into revenue.

The company expects revenue from multiple international Tier 1 customers during the ongoing quarter. But at the same time, gross margin is expected to decline to the low-40s range from 43.6% in the previous quarter.

Management sees this drop as a short-term phenomenon as Ciena is aggressively looking to capture more international customers. Start-up costs and discounts offered to new customers were cited as the reasons behind the pressure, but Ciena expects the metric to return to normal levels in the long run.

Strong domestically
Domestically, Ciena Corporation (NASDAQ:CIEN) should continue to benefit from its two main customers. AT&T Inc. (NYSE:T) and Verizon Communications Inc. (NYSE:VZ) together account for around 30% of its revenue, and they are either expanding or looking to make their LTE networks better.