The energy world is fixated on the price of oil, but not all upstream firms benefit from price increases. Between futures, options, swaps and other techniques, there are many ways that a firm can remove pricing volatility from its bottom line. In the long run higher oil prices help the industry by making more expensive fields worth developing, but in the short run there are only a limited number of firms that benefit from volatile prices.

The volatile players
Smaller upstream companies are often the first firms to be affected by higher prices. Chesapeake Energy Corporation (NYSE:CHK) is a good example of what can happen when you try to play the energy market. In 2011, they decided to remove a number of their natural gas hedges in anticipation of higher prices. In the end higher prices did not come when management expected. A lack of effective hedges helped to drive Chesapeake’s 2012 earnings per share down to a loss of $1.45 and cause difficult asset sales.

Hindsight is 20-20, but the company’s large debt load should have obvious that it was making a very imprudent decision. After firing its CEO and organizing a number of management changes, it appears that Chesapeake Energy Corporation (NYSE:CHK) has grown up. In the second half of 2013 it has around 94% of its oil production hedged to the downside at $95.64 per barrel and 79% of its natural gas production at $3.70 per million British thermal units, or mmbtu.

If the oil market temporarily crashes, the firm’s downside hedges will protect its income and dividend payment. A longer term price decline is a different story. The company still has high a total debt to equity ratio of 1.02, meaning that a sustained downturn would force further asset sales and put its dividend in danger.

EOG Resources Inc (NYSE:EOG) is a major shale driller with operations in the Permian Basin, Eagle Ford and the Bakken region. This company is a strong producer of oil, allowing it to avoid much of the pain that Chesapeake Energy Corporation (NYSE:CHK) had to endure in recent years. Being active in a number of Texan fields allows EOG to save on transportation costs and get a better bang for its buck.

A quick look at EOG Resources Inc (NYSE:EOG) latest 10-Q shows that based on its crude and condensate production levels, it is around 58.8% hedged with crude oil futures until the end of September at $98.80 per barrel and 55% hedged from the beginning of October until the end of 2013 at $98.84 per barrel.

On the surface the company looks like it is in a riskier position than Chesapeake Energy Corporation (NYSE:CHK), but it is important to take into account both firms’ debt loads. EOG Resources Inc (NYSE:EOG) has a total debt to equity ratio of 0.44, substantially less than Chesapeake’s. EOG Resources is also able to endure more volatility without worrying about meeting interest payments. Not only is the company in a better position to profit from rising oil prices, it is already profitable thanks to oil-rich acreage. 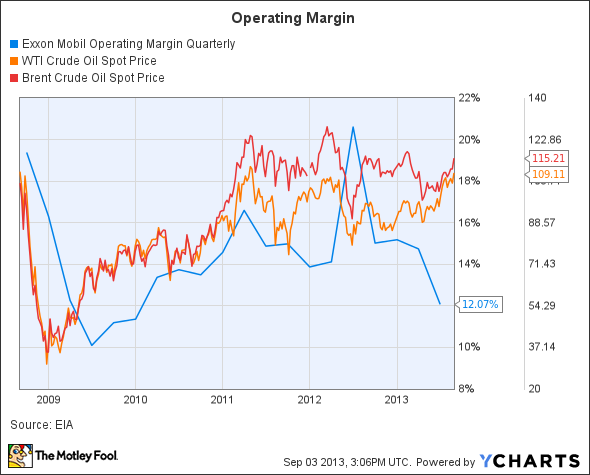 Exxon Mobil Corporation (NYSE:XOM) makes an effort not to use derivatives. Being the large integrated oil company that it is, it can use its downstream and upstream operations in tandem to stabilize cash flow. After the crash in 2008, oil prices only had to reach $70 before the company’s margins went back up.