Published on October 13, 2010 at 10:25 pm by Meena Krishnamsetty in Hedge Fund Analysis

Warren Buffett. We could jot down the nearly endless list of descriptives that would just begin to protray his followers’ feelings towards him. But it’s time consuming, so let’s just put this as a constant: He’s The Man.

But let’s just explore this a bit further. Ordinary investors follow every step Warren Buffett makes. But so do the seasoned professional money managers. They even invest their clients’ funds in Berkshire Hathaway stock. Everybody knows that if they had invested $1000 with Warren Buffett back in the day, they would have been a zillionaire today. We can’t go back in time and invest in Warren Buffett’s investment vehicle, Berkshire Hathaway stock, but we can invest today. But does it make sense to invest in BRK today? Can Warren Buffett generate alpha today, like other smaller hedge fund managers like David Einhorn, Bill Ackman, or Dan Loeb?

Your source for free real-time insider trading data, Insider Monkey, analyzed the returns of Warren Buffett’s Berkshire Hathaway between 1977 and 2009. We ran hundreds of regressions to calculate Warren Buffett’s alpha(skill) for every single month, using both 5-year and 10-year historical performance data. The results based on 10-year data are smoother but paints the same picture as the results based on 5-year data. Contrary to the general perception, Buffett has not had any alpha for the past 10 years. Let us repeat that: Buffett, no alpha, for the past decade. You would have been better off if you had invested your money with David Einhorn. (Technical note: We used Carhart’s four factor model and French’s factor returns to calculate Buffett’s alpha). 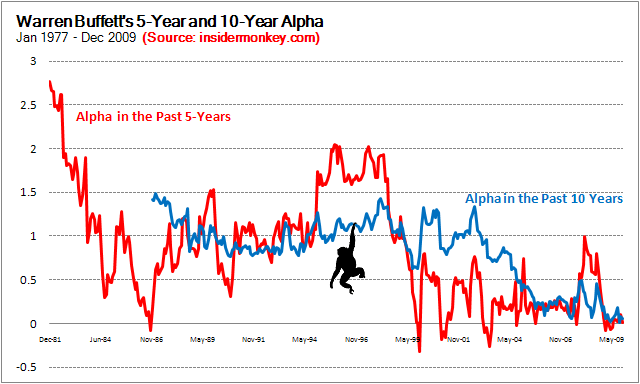 One might argue that Warren Buffett’s alpha cannot be perfectly extracted from the stock performance of Berkshire Hathaway. The recent poor performance and lackluster alpha may be a result of a decline in the “Warren Buffett premium” present in Berkshire stock. Nevertheless, investing in Berkshire Hathaway stock is the only way for many investors to tap into Buffett’s investment know-how, but they just can’t achieve abnormal returns by simply buying Berkshire stock anymore.