Hedge funds are performing dismally, according to Barry Ritholtz’s eye-opening opinion piece for The Washington Post. After the standard 2% annual fees and 20% they take out of their clients’ profits, most hedge funds’ rate of return seriously underperforms even a plain-vanilla S&P index fund. Why bother with a hedge fund, when you can keep that 22% for yourself by mimicking the moves of one bright and shining star Ritholtz mentions?

Bridgewater Associates only accepts institutional money anyway, so retails investor can only follow the fund — not be in it. As of March 31, Ray Dalio, Bridgewater’s founder, co-CIO and “mentor,” added several entirely new positions to his fund, which has almost $10 billion in assets under management. You’ve likely heard of all their names, from smaller stocks like Expeditors International of Washington (NASDAQ:EXPD), CenturyLink, Inc. (NYSE:CTL), and Boston Properties, Inc. (NYSE:BXP) to behemoths The Walt Disney Company (NYSE:DIS), International Business Machines Corp. (NYSE:IBM), and General Electric Company (NYSE:GE).

Let’s drill down on the less familiar names, and why Dalio’s buying them.

The shipping news on the back of a napkin

Expeditors International of Washington (NASDAQ:EXPD) is the middleman, the paper shuffler, the fixer of international shipping logistics. Its clients range from apparel manufacturers, electronics retailers, and department stores to industrial, automotive, and high-tech companies.

The company was founded in 1979 with a back-of-the-napkin business model of a transportation services provider/customs brokerage brainstormed by Peter Rose, current Chairman and CEO, and James Wang. Notably, Expeditors International of Washington (NASDAQ:EXPD) has a no-layoff policy, which it maintained even during the worst of the recession. Hanging on to talented employees may have helped the company to boast $6 billion in revenue in 2010.

CEO Rose has said, “Some of our best business is business that we lost.” Rose refers to clients who left, lured by rivals’ lowball prices, but came back disappointed by the service they received. To that end, Expeditors International of Washington (NASDAQ:EXPD) has a white-glove, time-definite, concierge-type service called Transcon, in place domestically for the last decade, and now being rolled out globally.

The company reported Q1 earnings on May 1 that were slightly disappointing. Revenue fell marginally from $446.571 million to $445.284 million, but diluted net earnings were up 8% year over year for $0.39 EPS. Most of the decrease was due to the well-publicized global slide in demand for PCs. 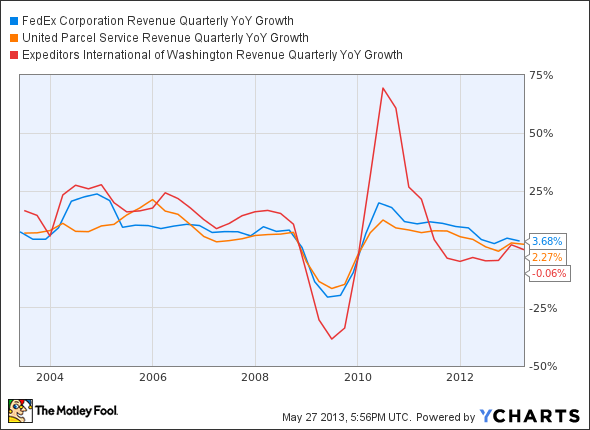 As seen in the chart below, Expeditors International of Washington (NASDAQ:EXPD) hasn’t yet returned to its robust pre-recession revenue growth, but it is coming back. Hedge fund boss Dalio must believe in a global shipping renaissance, since he also added to his emerging-markets ETF positions, the Vanguard VWO and the MSCI EEM, in the last quarter.

FYI, Expeditors attributes the sudden surge in its stock price some 6.5 years ago — a larger spike than its competitors’ — to a major hedge fund that had shorted the stock before a blowout earnings release, and was forced to cover to the tune of $100 million. Consider that yet another example why you shouldn’t buy into a hedge fund! 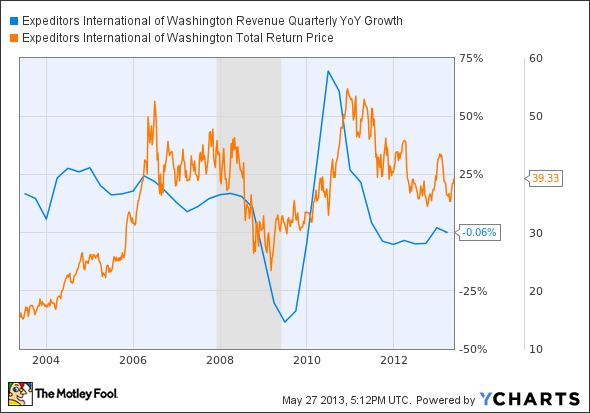 Boston Properties, Inc. (NYSE:BXP) is an office space REIT with most of its properties in downtown Boston, Washington, D.C., midtown Manhattan, San Francisco, and Princeton, N. J., for a total of 60 million square feet. Its most famous properties are the General Motors building in NYC and the Hancock Tower in Boston.

Its main competitor is Vornado Realty Trust (NYSE:VNO), another office REIT. Boston Properties, Inc. (NYSE:BXP)’ trailing P/E is, at 59.27, is more than twice as high as Vornado’s 29.01. Both are big in Manhattan property circles as well as the DC area — which means the federal government’s sequestration will make this area a struggle for both companies.

These office REITS had a big run up coming into 2013, but in the last year, the office space sector has underperformed not only the S&P 500, but also other niche REITS like apartments and mall owners.

On the Q1 conference call, Chairman Mortimer Zuckerman said that Boston Properties, Inc. (NYSE:BXP)’ most important foci going forward will be San Francisco, with its high-tech office growth, and Boston, with its growing life-sciences industry. CFO Michael LaBelle added that the company currently has $700 million in cash, and some upcoming property sales could fund paying off maturing debt or a possible special dividend. They also raised guidance to $0.09 EPS. 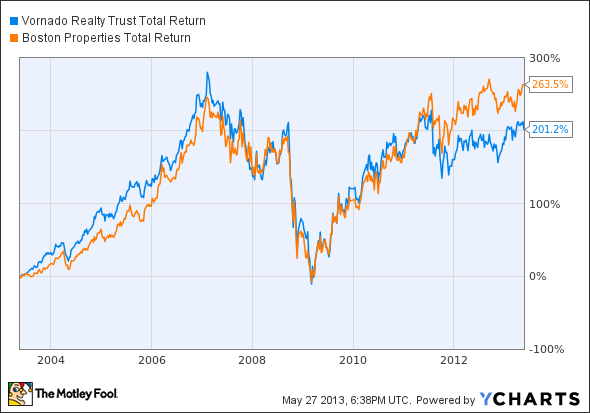 Can you hear me now?

This local telecom operates in 37 states and boasts 5.8 million broadband subscribers. It’s outperforming smaller rivals like Windstream, which offers 11% yield but likely unsustainable. But CenturyLink, Inc. (NYSE:CTL) is not a resounding buy, with analysts giving it less than a 1% five-year EPS growth rate and a price target of $39.00, for less than 5% upside.

Frontier Communications and CenturyLink, Inc. (NYSE:CTL) slashed their dividends, but Frontier’s is still higher, at 9%. 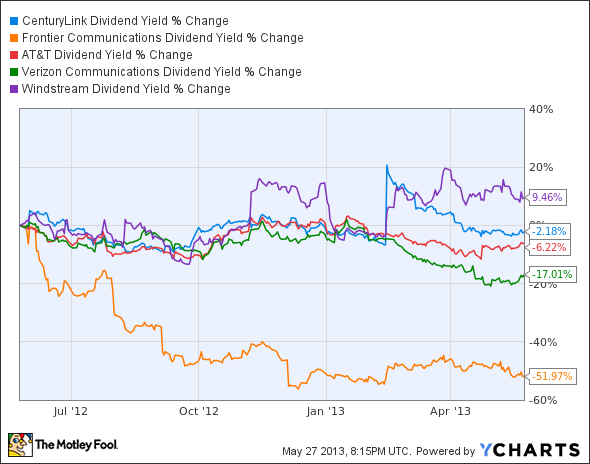 I think Expeditors has the most upside as a global logistics service and attractive prospects with its Transcon global rollout. Both Boston Properties and CenturyLink, Inc. (NYSE:CTL) have strong competitors as well as sector downtrends.

The article Don’t Buy a Hedge Fund, Be a Hedge Fund originally appeared on Fool.com and is written by AnnaLisa Kraft.

AnnaLisa is a member of The Motley Fool Blog Network — entries represent the personal opinion of the blogger and are not formally edited.