Are you one of the many investors looking at options?  While buying options themselves may offer enticing returns, these products generally carry risks greater than those of traditional equity investments. The point is, if you’re going to trade options, you better know what you’re doing.

Another way to play the options craze is CBOE Holdings, Inc (NASDAQ:CBOE).  In case you haven’t heard, it’s the leading options exchange and could serve as a less volatile play on the increasing popularity of options. 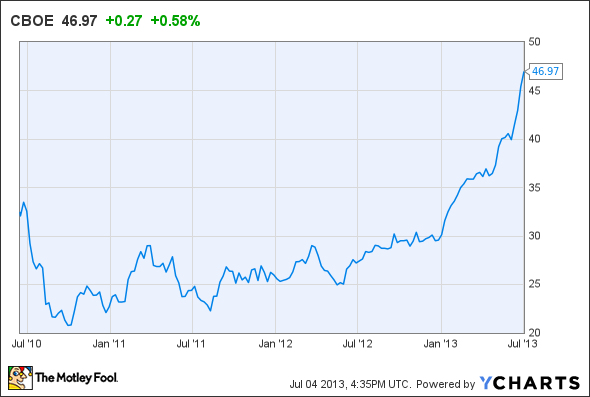 Shares have done particularly well since the company’s initial public offering.  It derives the majority of its revenue from index based contracts on the major exchanges including S&P and DJIA. The growth in this segment can be attributed to the company’s exclusive rights on these contracts.

While some have claimed monopoly power, it has preserved and recently extended exclusive rights to create and trade options on the S&P 500, the S&P 100, and other derivative indexes published by S&P through 2032. The exclsuivity of the agreement has allowed the company to take greater market share across the entire derivative business. As of the most recent 10-K filing, it estimated it owns 29% of the market, up 1.6% from the previous year. The gains came from the growing popularity of short term even weekly options contracts.  The recently extended exclusive agreement allows the company to corner the S&P 500 weekly contract market which is growing at a rate of over 25%. Additionally, the company has benefited from an increase in trading in its volatility (VIX) products, including futures and options.

At the end of its fiscal year, CBOE Holdings, Inc (NASDAQ:CBOE) reported volumes in VIX futures and options grew 99% and 14% respectively. I believe the company can sustain high growth rates well into the future, largely as a result of the monopoly like market in which it operates.

If we take a look at the company’s financials we see a strong balance sheet. As of the most recent quarter the company held $409 million assets, of which $275.5 million were current.  It also owns $135 million in liabilities, of which zero is considered long term debt. The company has more than enough cash, $210 million, to cover its current liabilities of $85 million.

The exchanges aren’t the only way to gain options exposure. Over the last few years brokerage companies have been taking in a greater proportion of their revenue from options transactions, as these typically draw double the average commissions. TD Ameritrade Holding Corp. (NYSE:AMTD) has worked hard to develop educational and risk analysis tools in hopes of getting the retail investor more involved with options trading. Over the last five years, it has seen the number of derivative transactions more than double to 40%.

Management has said it will be working to further educate its customers which should help to increase this number in the future. Additionally, the company has made good progress in gathering more assets.  Recently, the firm added $13 billion in assets, which helps it get over the $500 billion mark for the first time in its history. With higher assets you would assume SG&A expenses would rise accordingly, however, the company has cut these costs by 3% on a year-over-year basis.

Another familiar brokerage firm, E*TRADE has also benefited from a rise in options popularity.  Recently the percentage of trades involving options rose to 24%, up from 17%, just a couple years ago. While E*Trade has been hurt by declining equity trading volumes, its options segment has allowed it to actually improve its total volume count.

As previously stated, the margins on options commissions are significantly higher than that of equity trades, thus E*Trade will benefit greatly from an increasing number of customers trading options.  It should also benefit from a recovering housing market, a segment which has weighed on both earnings and shares since the housing bubble.

E*Trade’s ugly portfolio of housing assets has started to improve as a result of decreasing charge offs and pay downs. Going forward, the company may benefit, once again, by offering home loans. Consumer credit and confidence has improved and demand for homes is starting to ramp up.

As a result of strong partnerships and growing interest in the options market, CBOE Holdings, Inc (NASDAQ:CBOE) is in a great position to drive higher revenue and profits. But if you’re looking for a more diversified play, you might consider one of the brokerages that dabbles in options volume.  Ultimately, CBOE Holdings could be considered a solid play on options, without an expiration date.

Nathaniel Matherson has no position in any stocks mentioned. The Motley Fool recommends TD Ameritrade.

The article Betting on Options originally appeared on Fool.com.

Next Step for NYSE Euronext (NYX)