Caterpillar Inc. (CAT): A Few Things That Could Hurt Its Stock Going Forward

Caterpillar’s first-quarter numbers were disastrous. Earnings per share slumped 45% year-on-year on 17% lower revenue. A slow construction market in the U.S., weak demand from global markets, especially China, and dwindling commodity prices were behind the fall. Caterpillar Inc. (NYSE:CAT) has been struggling for several quarters now because of these factors, reflected in its weak operational performance over the past one year. 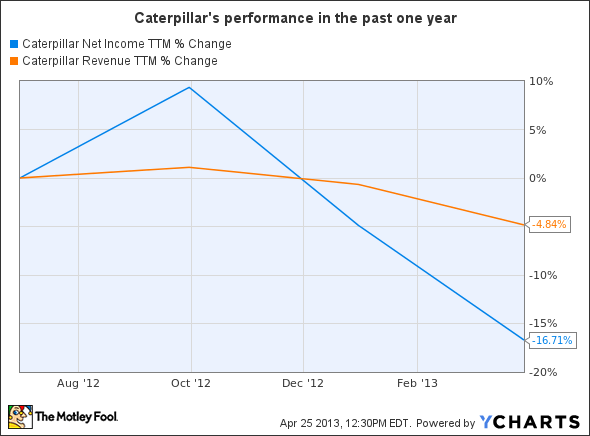 With the equipment maker lowering its outlook for 2013, the downward trajectory is likely to continue. Caterpillar expects its full-year revenue to be down by anything between 7% and 13% from the 2012 level. Its earnings of $7 per share for 2013 are down from the $8.50 a share it earned last year. It’s hard to see Caterpillar’s shares stage a comeback this year as a weak outlook and macro concerns could weigh heavily on them.

No takers for its equipment

Let’s check another important metric, days inventory, also known as inventory outstanding. This measure indicates how quickly the company can convert its inventory to sales, or simply how many days it takes to sell inventory. The quicker it does, the better, because the company can then free up its working capital for other uses. Caterpillar Inc. (NYSE:CAT) used to take 63 days to sell its inventory in 2004. It went up to 95 days by 2010 and hit 116 days last year.

How does Caterpillar’s inventory stack against peers? I’ll compare statistics with one company from each of Caterpillar’s businesses. Deere & Company (NYSE:DE) is better known for its tractors, but is a close competitor to Caterpillar because it gets 20% of its revenue from its construction-equipment business, which has a good global presence. Deere & Company (NYSE:DE)’s inventory turnover also slid downwards over the past few years. From 8.4 times in 2004, it is down to 4.3 times for the trailing twelve months. Yet, Deere’s equipment doesn’t take much time to fly off shelves, unlike Caterpillar. Deere’s TTM inventory outstanding is at 36 days only, a sharp contrast to Caterpillar’s three-digit figure.

Moving on to mining, Caterpillar Inc. (NYSE:CAT) took over the crown of the largest mining-equipment maker from Joy Global Inc. (NYSE:JOY) when it acquired Bucyrus in 2011. Joy’s 2012 inventory turnover of 2.5 times was weaker than Caterpillar’s, but it has remained range-bound for several years. Again, Joy scores higher on days inventory — It took 72 days to sell off its inventory in 2012. That’s up from 58 days in 2004, but the rise isn’t as steep as Caterpillar’s. Overall, both Deere & Company (NYSE:DE) and Joy Global Inc. (NYSE:JOY) are on firmer grounds than the equipment king.