However, Chao downplayed Tencent’s recent gains, stating, “Weibo has reached a critical mass and will continue to grow in user base and user activity given its network effect.” By “network effect,” Chao believes that Weibo will become a self-growing system similar to Facebook and Twitter, which branches and spreads outward — as opposed to Tencent’s messaging applications, which are generally confined to pre-existing contacts. In other words, users can’t attract followers or fans with Tencent’s software.

Building your own Ministry of Truth

You’d think that all this free speech and people attracting followers would make the Chinese government nervous. Let’s say an irate Weibo user with a large following tweets to his followers, “Let’s all meet up for the anniversary of the #Tiananmen Square massacre to demand a #Free Tibet and #Taiwanese independence!”

To deter that from happening, the Chinese government now requires all Internet users to provide their real names, and has thoroughly cracked down on message boards and social media sites such as Weibo that contain “illegal” information.

To avoid this fate and to remain in good standing with authorities, Sina is required to police itself by hiring censors who erase “offensive” messages as soon as they are posted. Sina has to hire so many censors to build its own “Ministry of Truth” that analysts have been increasingly worried about rising labor costs. Sina acknowledged that labor expenses, combined with networking infrastructure and sales department costs, will likely rise throughout 2013 as a result.

Sina faces the same challenges as all of its industry peers. Therefore, we should compare Sina’s fundamentals to its rivals and see how its valuation and growth metrics stack up.

Baidu, the “Google Inc (NASDAQ:GOOG) of China,” is the hands-down winner. With control of approximately 80% of the Chinese Internet search market, top margins in its industry, and fundamentally cheap valuations, it’s no wonder that Baidu is one of the most popular Chinese stocks with foreign investors. The one fundamental strength Sina has, however, is an important one — a clean balance sheet with no outstanding debt.

Let’s also check the three companies’ top and bottom line growth over the past five years. 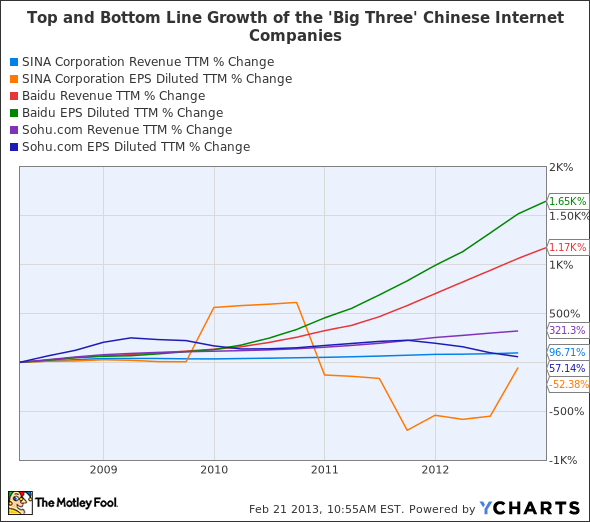 Sina is not an investment for the faint-hearted. The stock has a beta of 1.4, which means investors can expect some major turbulence, exacerbated by major headwinds of Chinese economic growth and Internet regulation. Although the company has a clean balance sheet, its margins are low compared to its industry peers. Sina’s forward valuations also suggest that the stock is overpriced with sluggish growth ahead.

For now, investors interested in China should stick with the stock they know best — Baidu — until Sina can stabilize its top and bottom line growth.

The article Can Sina’s Business of Censored Free Speech Survive? originally appeared on Fool.com and is written by Leo Sun.

You Shouldn’t Buy These Internet Stocks Despite Market Optimism: Yahoo...

This Just In: Upgrades and Downgrades – Baidu.com, Inc. (ADR) (BIDU)