A SWOT analysis is a look at a company’s strengths, weaknesses, opportunities, and threats, and is a tremendous way to gain a detailed and thorough perspective on a company and its future. As 2013 begins, I would like to focus on a leading pharmacy health care provider in the United States: CVS Caremark Corporation (NYSE:CVS).

1). Solid Revenue Growth: In 2006, CVS reported revenue of $43.81 billion; in 2011, the company announced revenue of $107.10 billion, representing year over year annual growth of 19.58%, and this trend is widely anticipated to continue into the future with projections placing 2016 revenue at $143.22 billion.  This revenue growth has been a result of growth by the company in the retail prescriptions industry in market share

2). Dividend: Currently, CVS pays out quarterly dividends of $0.225, which when annualized puts the dividend as yielding 1.74%

3). Institutional Vote of Confidence: 84.06% of shares outstanding are held by institutional investors, displaying the confidence some of largest investors in the world have in the company and its future

4). Inexpensive Valuation: At the moment, CVS carries a price to earnings ratio of 17.32, a price to book ratio of 1.76, and a price to sales ratio of 0.60–all of which indicate a relatively inexpensive valuation

5). Strong Presence in Retail Prescriptions Market: CVS’s main business segment, retail prescriptions, makes up 46.57% of total business, and CVS holds a market share of 18.7% in this industry, representing a strong position that is only anticipated to grow into the future

1). Single Digit Margin: Currently, CVS possesses a net profit margin of 3.26%, which represents a company with little room to spare for unexpected expenditures due to the steep competition in the industry

2). Net Debt: Despite possessing $1.2 billion in cash and cash equivalents on their balance sheets, their debt load of $35 billion results in a net debt of $33.8 billion, a major downside to the business as this net debt represents 52.56% of total market capitalization

1). Growth in Number of Stores: In 2008, CVS possessed 6.92k stores; currently, the company has 7.59k stores in the United States, and further growth in the number of stores the company possesses could lead to the establishment of new revenue streams

3). Dividend Growth: Since implementing a dividend program in 1960, CVS has consistently raised their dividend payouts, and nothing indicates that this trend will not continue well into the future 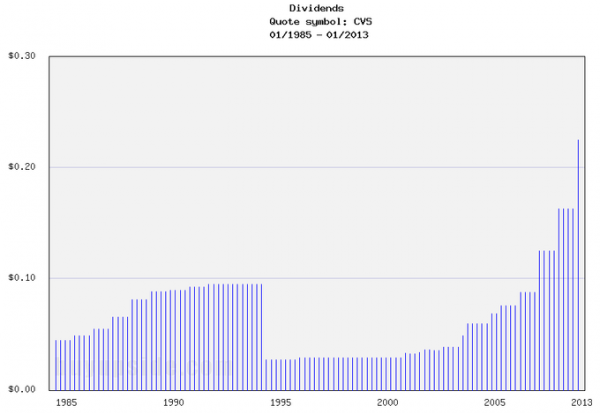 4). Market Share: Any growth in market share in the retail prescriptions industry could greatly benefit the company and fuel revenue growth

Shorts Are Piling Into These Stocks. Should You Be Worried?: Plains All American...