Chipotle Mexican Grill, Inc. (NYSE:CMG) is one of the most divisive stocks in the market. Value investors have always shied away from the stock, since it has traded at a hefty premium to the restaurant industry, while growth investors have relished in its strong return on investment over the past seven years.

Chipotle is a Mexican quick-serve restaurant that has carved out a niche for itself by only using organic, locally produced ingredients. Thanks to its positive image, the company is currently ranked third in consumer perception of fast food brands, trailing only Chick Fil-A and Panera Bread Co (NASDAQ:PNRA).

For its fourth quarter, Chipotle’s earnings improved 7.7% to $1.95 per share, or $61.4 million, while revenue rose 17% to $699.2 million. Both top and bottom lines topped analyst estimates. However, same-store sales only rose 3.8%, missing the Thomson Reuters forecast of 3.9%.

That dip caused a lot of concern, but how did it fare compared to its industry peers during the fourth quarter?

Chipotle, like its industry peers, is highly exposed to food inflation and rising commodity costs. During the fourth quarter, Chipotle’s restaurant-level operating margin slid from 26.1% to 24.6%, due to higher prices for meat, dairy products and salsa ingredients. Total food costs rose 22%, accounting for 34% of its total revenue.

To offset this threat, Chipotle intends to raise prices by 4% to 5% in the middle of fiscal 2013. Since Chipotle is considered ‘higher-end’ fast food, a price increase to preserve its margins could hurt its lagging same-store sales.

More importantly, Chipotle lacks a value or dollar menu, that McDonald’s Corporation (NYSE:MCD) and Yum! Brands, Inc. (NYSE:YUM) have been using to attract higher sales volume. Both McDonalds and Yum intend to boost advertising for their value menus in the second half of fiscal 2013.

In this regard, Chipotle’s insistence on only using locally grown organic ingredients (within 350 miles) is a weakness. Chipotle’s competitors use factory farmed meat and imported vegetables and grains to maximize margins, although these practices are far less admirable.

To gain a better perspective on Chipotle’s margins, we should compare its operating margins over the past five years against its larger peers, which rely on industrial farming. 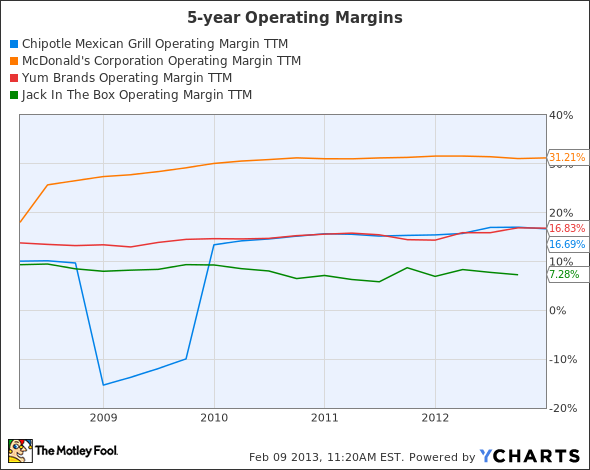 Although Chipotle cannot match McDonald’s margins, it only underperforms Yum Brands by a hair.

That suggests that Chipotle can still maintain its operating margins while fighting the good fight by using locally grown organic products. However, does the company really have the pricing power to boost prices?

From Momentum to Value Stock

Throughout most its publicly traded life, Chipotle was considered a major momentum stock. To understand how hot Chipotle once was, we should compare its trailing P/E over the past five years, in comparison to its stock price. 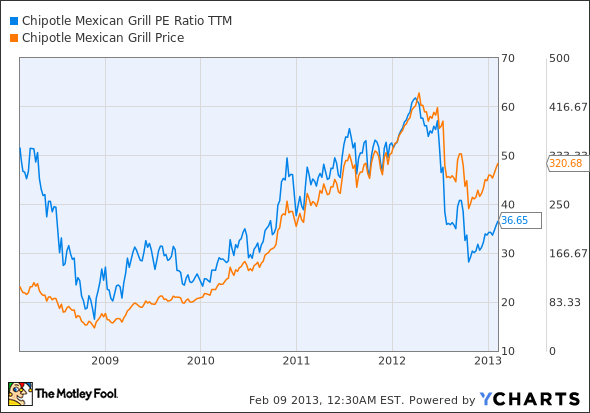 In early 2012, Chipotle’s P/E soared above 60 as its price surged into the $440s, completely outpacing the growth of its industry peers.

However, as P/E rises, market expectations grow until the company is unable to surpass estimates. That’s when fundamental gravity catches up and reconciles its price with its P/E multiple.

Therefore, Chipotle’s 27% plunge over the past year can be considered a rebalancing towards a more sustainable multiple. Let’s see how Chipotle stacks up fundamentally against its fast food rivals.

Chipotle appears to be more expensive in every multiple and percentage, except for a key one – debt. Chipotle’s low debt shows that the company is spending and expanding responsibly, with strong financial controls.

For a more accurate picture of growth, we should also study how Chipotle’s EPS and revenue growth measures up to these rivals, and if it justifies these higher multiples. 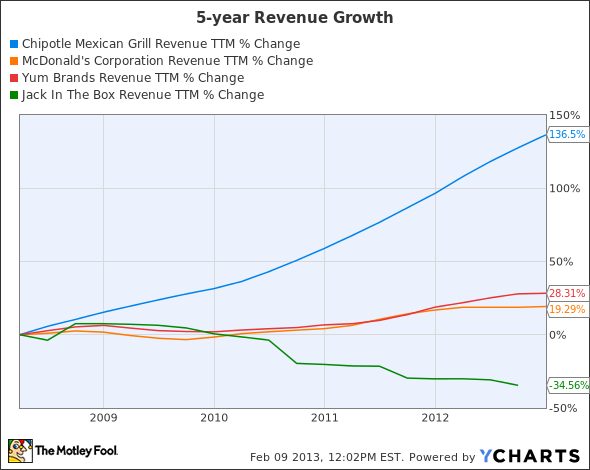 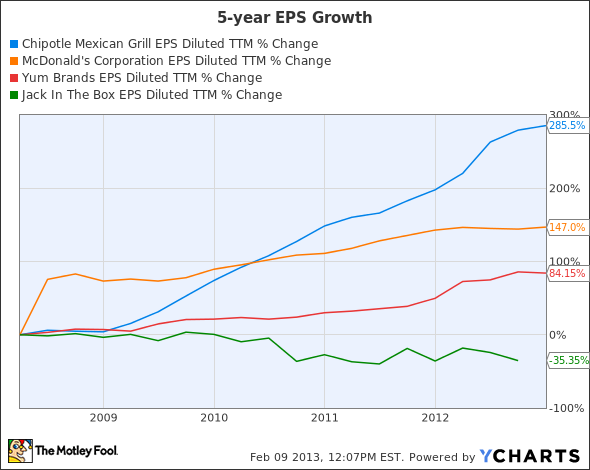 From these charts, it’s easy to see why growth investors have been enamored with the stock. But can it maintain that fantastic top and bottom line growth, or has growth finally peaked?

While Chipotle still has room to expand in the U.S. market and abroad, its growth may not come as easily as it did in the past.

Meanwhile, Panera Bread’s reputation of “healthy” fast food could also slow Chipotle’s growth. Bistro fast food restaurants such as Panera have jumped into the niche market that Chipotle helped create, emerging as direct, domestic competitors rather than indirect, multinational ones such as McDonald’s, Starbucks or Yum.

Chipotle is a fantastic growth stock that appears to be trading at a decent multiple. However, it is still a restaurant stock, and will be heavily exposed to macro factors such as food inflation and unstable commodity costs. The company’s lack of a value menu or diverse beverages could cause rigidity if those rising costs squeeze margins. The stock is not cheap – growth stocks rarely are – so it is not recommended for conservative value investors. However, its domestic and international growth – still in its infancy – is very appealing, and could lead to returns far exceeding its more mature industry peers.

The article Can Chipotle Still Serve Up Spicy Growth in 2013? originally appeared on Fool.com and is written by Leo Sun.

Should You Leave Room for Chipotle Mexican Grill Inc. (CMG) in Your Portfolio...