Profiting from insider moves can be quite tricky. This is because insider transactions tend to affect the stock price quickly — first from insider buying and then from follow-on purchases of investors as they try to ride along with these insiders. It’s rarely wise to hop on board if the stock has already made a nice move, as short-term investors may soon be hopping off anyway.

Yet falling markets can change this dynamic. Share prices can slump in the days and weeks after an insider purchase, giving investors a chance to score an even better deal. Here are three stocks now trading below the levels transacted by insiders…

1. Titan International Inc (NYSE:TWI)
Thanks to a string of recent acquisitions in Latin America, Australia and Europe, Titan is now the world’s largest manufacturer of massive wheels and tires, the kind you’ll find on huge mining trucks carving coal and other natural resources out of the mountainside. It’s a fairly attractive niche. While most wheel or tire makers have operating margins in the 2% to 3% range, Titan’s operating margins approached nearly 8% in 2011.

This past spring, Company Director Richard Cashin saw clear skies ahead for Titan and purchased $10 million in stock at an average price of $28.50. Talk about lousy timing: That worked out to be the 52-week high for the stock, which now trades below $20. 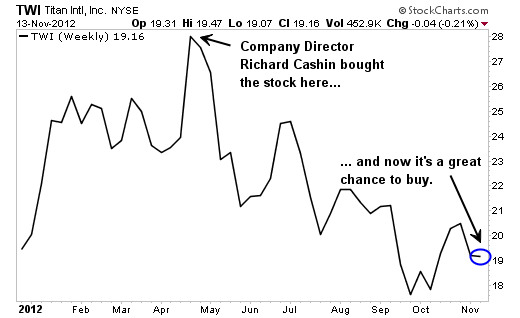 Investors have been cool to mining-related stocks in recent months, ever since Caterpillar Inc. (NYSE:CAT) warned of a global slowdown in major mining and construction projects. In effect, Titan is a cyclical stockat the wrong end of the cycle. But you can’t ignore the value proposition for this stock. Shares now trade for less than eight times projected 2013 earnings forecasts of around $2.70 per share. When the cycle moves back into favor, perhaps as we approach mid-decade, earnings strength could approach $4 a share.

2. Fuel Systems Solutions, Inc. (NASDAQ:FSYS)
Not all insiders work at a company as an officer or director. They’re classified as such if they simply own 5% or more of a company. The SEC assumes these “beneficial owners” possess so much information about the company that they must submit a public filing every time they buy or sell company stock, just as company insiders do.

After already achieving such status with companies as IMAX Corporation (NYSE:IMAX) and Westport Innovations Inc. (NASDAQ:WPRT), off-the-radar Fund Manager Kevin Douglas is quickly becoming a major investor in Fuel Systems Solutions as well. This company makes engines that can run on compressed natural gas (CNG). In fact, the next generation of General Motors Company (NYSE:GM) pick-up trucks and vans will be using Fuel Systems’ technology.

Douglas may have gotten too excited about the prospects for that contract, snapping up nearly 100,000 shares in early October at an average price of $18.50 each. Fuel Systems recently delivered a weak quarter, as these GM vehicles haven’t hit the showrooms just yet. Shares have subsequently plunged below $14, more than 25% cheaper than what Douglas paid for the stock. “Mr. Douglas has a knack for making money in this space. He is also, however, a long-term investor. The value of his stakes in Westport Innovations and Fuel Systems have gyrated wildly while he’s been in them. He does not sell them high while continuing to buy when lows reappear,” noted Jonathan Moreland, who follows insider moves at Insiderinsights.com. Chances are the recent fall in the stock will simply entice more buying from this patient insider. 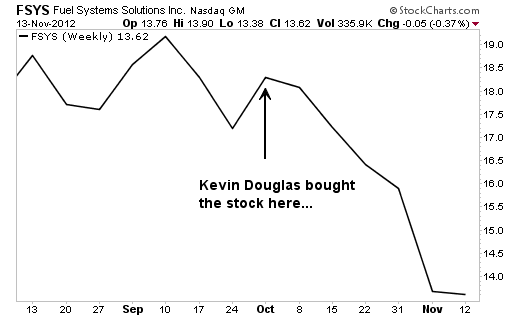 3. NuStar Energy L.P. (NYSE:NS)
Roughly two months ago, four company directors at NuStar acquired a collective 494,000 shares at an average price of $48 a piece. They likely expected investors to warmly greet an imminent announcement that would help reshape this energy company’s business. Well, that announcement came during the second week of November and investors were hardly pleased, pushing shares to a 52-week low below $40.

NuStar’s big announcement: It plans to sell major refinery and connected pipeline systems in the Texas cities of San Antonio and Elmendorf, and redeploy the proceeds (along with borrowed funds) to acquire a gas pipeline and storage system in the Eagle Ford shale region of Texas. Management figures these moves will tighten the company’s focus on core oil and gas distribution, and away from non-core businesses such as oil refining and marketing. Investors figure management might be too aggressive with its moves, at least judging by the share price reaction.

The question is whether the dividend will need to be trimmed — at least until these deals are digested. NuStar hopes to announce a buyer for the refinery in coming weeks, at which time we’ll have a clear read on the capital structure and the ability to support the current dividend. Analysts at Credit Suisse predict that the current $4.38 a share dividend payout will stay intact (equating to a double-digit dividend yield). If they’re right, then shares may quickly rebound into the upper $40s. 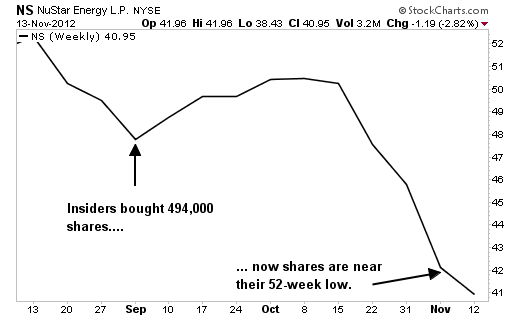 Risks to Consider: Insiders tend to spot value over the long haul, but are notoriously bad market timers, so these stocks may take a while to fulfill the promises insiders have made.

Action to Take –> Analyzing insider transactions is one of several steps you need to consider before making a decision to buy. If the company appears to be in strong financial shape and possess solid long-term prospects, then the insider buying activity is simply affirmation of abullish investment thesis.

Fight Low Rates in 2013 With These Bond ETFs