Like most companies, Harley-Davidson, Inc. (NYSE:HOG) has gone through plenty of challenges in recent years. During the financial crisis, the company took advantage of a financing offer from Berkshire Hathaway Inc. (NYSE:BRK.A) to raise $300 million of badly needed capital. Although the deals didn’t get the attention that Berkshire’s other major capital infusions in companies like Goldman Sachs Group, Inc. (NYSE:GS) and General Electric Company (NYSE:GE) received, Harley arguably ended up with the best deal of the three, as its 15% interest rate didn’t require it to give Berkshire Hathaway Inc. (NYSE:BRK.A) an equity kicker through additional warrants. As Buffett said at this year’s annual shareholder meeting in Omaha, “Any company that gets its customers to tattoo ads on their chests can’t be all bad.”

To get through those challenges, Harley had to make some big moves. The company discontinued its Buell line of racing motorcycles, alienating customers who in their own way were as avid as riders of the company’s namesake bikes. Negotiations with labor unions were essential in helping the company become more competitive against foreign competitors, and major spending on plant modernization has helped Harley cut costs.

What the future holds for Harley

All those efforts have paid off recently for the company. In its most recent quarter, Harley-Davidson, Inc. (NYSE:HOG) posted a 34% jump in profit as it managed to ship 17% more bikes worldwide than it did in the year-ago quarter. Those shipments hadn’t yet shown up in dealer sales, which dropped double-digit percentages both in North America and in the company’s Europe/Middle East/Africa segment. Such lags aren’t unusual, and with a stronger housing market and overall economic conditions in the U.S., Harley hopes that a rebound in retail demand will justify decisions from dealers to boost inventory.

The big question for Harley is whether its choice to hone its focus will pay off in the long run. Polaris Industries Inc. (NYSE:PII) has taken the opposite approach, with a broad lineup of recreational vehicles that includes not only its Victory motorcycle line but also snowmobiles and off-road vehicles for both retail and commercial and military use. Polaris Industries Inc. (NYSE:PII) has sported higher growth rates than Harley, and its stock price has rebounded even more sharply. 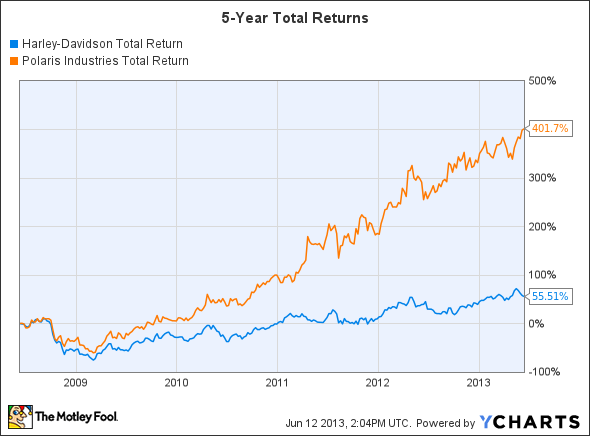 Still, Harley’s brand remains a huge driver of potential growth. The recent renewal of its partnership with Miller High Life to celebrate the 110th anniversaries of both companies continues an relationship that has been going on for decades, with advertising campaigns highlighting the attention to quality and detail that has made Harley-Davidson, Inc. (NYSE:HOG) such a well-regarded company.