Stanley Druckenmiller pulled double duty for over a decade, managing a portfolio for George Soros and running Duquesne Capital. His success as an investor has resulted in a net worth of nearly $3 billion. He has retired as a fund manager but still manages his personal wealth in a family office, and is required to file quarterly 13Fs with the SEC. We track 13F filings from hundreds of investors as part of our work developing investment strategies (we have found, for example, that the most popular small cap stocks among hedge funds generate an average excess return of 18 percentage points per year) and also like to review what top managers have been doing as potential sources of investment ideas. We went through Druckenmiller’s 13F filing for the first quarter of 2013 and here are three moves which we noticed he made during Q1:

News Corp. We don’t show Druckenmiller owning any shares of News Corp (NASDAQ:NWSA) at the beginning of 2013, but by the end of Q1 his family office had bought 2.3 million shares. Value investors have been crowding into News Corp as the company prepares to break into two; this situation is thought to have similar effects to a spinout, with management of the new companies being better able to focus on operations (read more about why hedge funds like investing in spinouts). The stock has risen 67% in the last year on this investor interest as well as a general rally among media and entertainment stocks. Currently, the company as it exists is valued at 17 times forward earnings estimates. That multiple is not particularly high, meaning that even after the rally the market’s expectations for the benefits of the breakup are not that high. 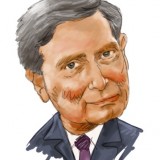 Dumping Merck. The 13F reported that Druckenmiller had closed his position in Merck & Co., Inc. (NYSE:MRK), which had been one of his top stock picks at the beginning of 2013. Large positions in Pfizer Inc. (NYSE:PFE) and Eli Lilly & Co. (NYSE:LLY) remain, showing that he is not bearish on drug manufacturers generally. Merck & Co., Inc. (NYSE:MRK) has some attractive defensive characteristics, with a dividend yield of 3.7% at current prices and a beta of 0.4, but of course the same is the case for many large pharmaceutical companies. At first glance, Merck doesn’t look so great as a value investment with a trailing P/E of 24 and with both revenue and earnings down by 8-9% last quarter compared to the first quarter of 2012. Wall Street analysts are predicting that the company will rebound, but Druckenmiller’s move here is understandable. Pfizer Inc. (NYSE:PFE) and Merck & Co., Inc. (NYSE:MRK) had both made our list of the most popular healthcare stocks among hedge funds in the fourth quarter of 2012 (find more healthcare stocks hedge funds loved).

Changing planes. Druckenmiller cut his stake in US Airways Group, Inc. (NYSE:LCC) from about 4 million shares down to 1.2 million, and more than doubled the size of his position in Delta Air Lines, Inc. (NYSE:DAL) making that stock another of his ten largest holdings by market value. The much-derided airline industry has been on a tear in the last year, in part because investors expect US Airways Group, Inc. (NYSE:LCC)’s acquisition of American out of bankruptcy to result in higher prices. Both of these companies are valued at only 6 times consensus earnings for 2014, and while we don’t recommend buying any stock solely off of sell-side forecasts that is a low enough figure that we find Delta Air Lines, Inc. (NYSE:DAL) and US Airways at least somewhat interesting. Billionaire David Tepper’s Appaloosa Management has been bullish on airlines in the past (check out Tepper’s stock picks).

We’d be interested in doing more research on the airlines, though we would note that US Airways Group, Inc. (NYSE:LCC) does face integration risk from its acquisition. We’re not sure what has caused Merck & Co., Inc. (NYSE:MRK)’s financials to fall off, but we are certainly skeptical that it is any better a value than its peers when we look at the numbers. As for News Corp (NASDAQ:NWSA), while the stock is well above its levels from a year ago it apparently isn’t all that expensive in terms of the company’s fundamentals. It may be worth trying to determine how much upside the breakup could result in- it seems that the market is currently expecting very little.