Even with the data in 13F filings being several weeks old by the time they are released, there are still a few different ways for investors to use this information. One way is by researching potential investment strategies; we have discovered, for example, that the most popular small cap stocks among hedge funds outperform the S& 500 by 18 percentage points per year on average (learn more about our small cap strategy). A second method is to use the names reported in 13F filings as a list of ideas and do more research on any stocks which seem like good values. We have gone through the 13F from billionaire Richard Chilton’s Chilton Investment Company and here the fund’s top five positions in retail stocks (representing a variety of verticals) as of the end of December (or see our full list of Chilton’s stock picks):

The fund increased its holdings of Dollar General Corp. (NYSE:DG) by 64% in the fourth quarter of 2012 to a total of 2.8 million shares. Dollar stores had been big hits a couple years ago but Dollar General is actually up only 8% in the last year. Sales were up 10% in its most recent fiscal quarter compared to the same period in the previous fiscal year, contributing to a 21% increase in earnings; given those growth rates, the trailing P/E of 17 is somewhat attractive. Billionaire Stephen Mandel’s Lone Pine Capital was also buying Dollar General in Q4, with the fund reporting a position of over 13 million shares in its own 13F (find Mandel’s favorite stocks). 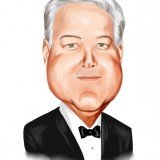 Chilton owned 1.6 million shares of The Home Depot, Inc. (NYSE:HD) at the beginning of January. The home improvement retailer’s price is up 44% in the last year as market watchers expect an increase in housing transactions to stimulate store traffic. Indeed, Home Depot experienced double-digit growth rates of both revenue and earnings in the fiscal quarter ending in early February versus a year earlier. The stock trades at 23 times trailing earnings, meaning that the current price already includes some additional growth. Fisher Asset Management, managed by billionaire Ken Fisher, is another major holder of the stock (research more stocks Fisher owns).