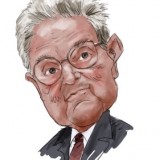 George Soros is best known for the fortune he made shorting the British pound in 1992, but he currently invests a considerable amount of money in equities and so is required to report many of his long positions in 13F filings. We’ve gone through the 13F for the third quarter of the year and compared Soros’s holdings at the end of September to three months earlier. Read on for our impression of his moves and compare them to what he’s bought and sold before.

AIG. American International Group, Inc. (NYSE:AIG) became Soros’s largest 13F equity holding during the third quarter with a position of over 15 million shares being reported in the filing. A number of value investors have been getting into the insurer over the course of the year, and at a P/B ratio of 0.5 it certainly looks cheap compared to the book value of its equity. We also like its earnings multiples- it trades at 9 times forward earnings estimates- and revenue was up strongly in the third quarter compared to the same period in 2011. Fellow billionaire Dan Loeb had initiated a position during the second quarter of 2012 and we think that it still looks like a good buy for investors.

Selling Walmart. Wal-Mart Stores, Inc. (NYSE:WMT) had been Soros’s top stock last quarter, but between July and September he sold about half of his shares in the discount retailer. Wal-Mart reported only modest growth in its most recent quarter compared to the same period in the previous year, but given its massive size and its limited exposure to broader market conditions (the beta is 0.4) we think that’s a fairly good result. Limited growth also indicates that Wal-Mart isn’t seeing too much competitive pressure from dollar stores. The stock trades at only 14 times trailing earnings and we actually think that it’s one of the better buys in the retail industry. Warren Buffett is a major Wal-Mart shareholder.

Selling Westport. The near-closing of the position in Westport Innovations Inc. (NASDAQ:WPRT) could be name specific or part of a broader move away from auto parts. Westport provides low-emission engines that run on natural gas and other relatively clean fuels, so there’s company specific factors as well as broader industry demand driving the stock. The market cap is currently $1.4 billion even though Westport is expected to be unprofitable both this year and next year. With the business struggling recently, and quit heavy short interest (27% of outstanding shares held short) we think the stock should be avoided.

Megacap dividends. Soros may have sold some shares of Wal-Mart, but it’s still one of his six largest 13F equity positions along with an increased stake in General Electric Company (NYSE:GE) and a large increase in his holdings of Johnson & Johnson (NYSE:JNJ). These latter two stocks pay dividend yields above 3% at current prices, and have market caps of about $200 billion. They also both got mid-single digit growth rates in revenue last quarter versus a year earlier, though higher costs at Johnson & Johnson had driven that company’s net income down somewhat. Their forward earnings multiples are in the 12-13 range, which along with the dividend yield indicates value potential, though in Johnson & Johnson’s case these forward estimates represent expectations of high earnings growth. We’re less sure about that stock, though GE could merit a closer look.

We think that Soros’s moves in AIG and Westport make perfect sense. Selling Wal-Mart is a bit harder to understand as we like the company and think that it offers a good opportunity in retail- many general retail stores trade at considerably higher earnings multiples, and many specialty big-box stores such as Best Buy are proving less able to compete with Amazon. We don’t think owners of Wal-Mart should be selling.

Should You Join Carl Icahn in Greenbrier?