Conservative investors often seek safety by putting their money into U.S. Treasuries. But that move might be the equivalent of financial suicide. Here’s why.

To quote Berkshire Hathaway Inc. (NYSE:BRK.A)’s Warren Buffett, “Investing is forgoing consumption now in order to have the ability to consume more at a later date.”

Now, a 1.75% 10 year bond might seem risk-free. Its yield certainly is, and the US Treasury will certainly print a cashable check when your bond comes due — but the government will determine the true value of your principal in the end. Should it decide to inflate its currency, the future consumption power of your future dollars will be far far less than it is now.

Even now, the “advertised rate” of inflation is 2%-3%. Even at stated inflation rates, you are making an “investment” that seemingly guarantees you less consumption power when your principal’s eventually returned. Therefore, from a simple investing standpoint, it’s a sucker play to put your principal to work for what will be a negative real return.

Right now, the Federal Reserve is printing more money than any time in history. Quantitative Easing 1, QE2, QE3 … will Bernanke be able to get up to double digits? By buying bonds on the open market, the Fed’s drastically increasing the money supply. By the laws of economics, this must raise nominal prices — the definition of inflation. Buffett has consistently said that the moeny now being created will leave us facing inflation down the road — and notjust  the 2%-3% currently stated.

According to this column,The Reuters CRB Commodity Index, which tracks the prices of coffee, cocoa, copper, and cotton, as well as energy, is up 38% over four years, or 8.6% at a compound annual rate. If commodities don’t convince you, take into account the Big Mac index,. According to Time:

McDonald’s hamburgers are available in many countries, and their prices reflect the cost of food, fuel, commercial real estate, and basic labor. The price of a Big Mac, therefore, can be used to compare the economies of different countries – or serve as a bellwether of inflation in a single country. Since the recession ended, the cost of a Big Mac in the U.S. has risen from an average of $3.57 to $4.37, or 5.2% a year.

Why Few Others Want to Make This Argument

I’m not the first one to make this argument. In researching this post, I spoke with bond traders who told me they got absolutely slaughtered using identical logic, and encouraged me to stay away.

“Don’t fight the Fed,” I was told. “Yes, eventually you’ll be right, but in the meantime if you short bonds you have to pay out the coupon, and the Fed can just print and print and print.”

There’s no doubt that shorting is risky, and the market has demonstrated the ability to stay irrational longer than you can remain solvent.

However, the current lull in rational psycholog reminds me of 1999, when the froth in dot-coms seemed obvious. Back then, people told me, “How can you fight the market? I got killed doing so.”

I do realize the Fed is not the same beast as the mania of investors during the dot-com boom, but I firmly believe that our current, artificially low interest rates can’t last.

You’ll have to park your money in a fund for this, but I am putting a buy order in ProShares UltraShort 20+ Year Treasury and ProShares Short 20+ Year Treasury ETF as a less risky vehicle. Ultrashort finds give you double the positive or negative return. But their potential gains come with significant risks, so before you dare to embark on that strategy, make sure you know just how dangerous it can get.

If that approach seems too risky, then at least put your money in a high-yielding dividend stock that can raise its prices as inflation rises. A company with a rock-solid balance sheet like Exxon Mobil Corporation (NYSE:XOM) or The Procter & Gamble Company (NYSE:PG) which has raised its dividend every year and currently and currently yields 2.8%. Look at the below chart to see how the dividends they’ve paid out to shareholders have risen over the last 10 years. You don’t get the same upside with bonds! 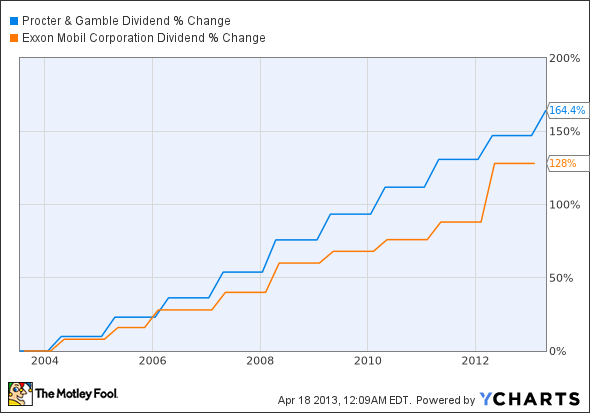 Again, even if you don’t listen to a word I said here, please remember that buying treasuries is not nearly as risk-free as people would like you to believe. If you have a logical, cogent argument against my logic, please enter it the comment section below.

The article The Bond Bubble Will Explode originally appeared on Fool.com and is written by Margie Nemcick-Cruz.