What’s even more, Buffett also received warrants on 700 million shares of common stock, which gives him the right to buy at $7.14 per share. The math on this end of the transaction alone is grand and impressive: Assuming the current share price rises even modestly, Berkshire Hathaway stands to gross not far from $3 billion.

Although this is hardly a new development, it’s gotten a bit of play in the media thanks to a New Year’s article in The Wall Street Journal opining that the bank would greatly benefit from grabbing back the stake.My fellow Fool John Maxfield agrees; take a gander at his read on the situation here.

What’s next Historically, January’s been a good month for the Dow. If this ancient trend continues, Berkshire Hathaway should outpace the index, as ever. Investors should keep an eye not only on those developments and the B of A situation, but the state of the insurance business — as it produced roughly two-third of the company’s revenue in 3Q — plus the performance of the firm’s high-profile equity holdings in big stock market names.

As of the end of that quarter, the company’s top five positions in those stocks (in percentage of portfolio terms) constituted a Buffettian mix of sectors: The Coca-Cola Company (NYSE:KO) , Wells Fargo & Company (NYSE:WFC), International Business Machines Corp. (NYSE:IBM), American Express Comapny (NYSE:AXP), and The Procter & Gamble Company (NYSE:PG). Only one of the five (Amex) has been beating the Dow since then, however, with Coke and IBM in negative territory . The bulk of Berkshire Hathaway consists of the firms it controls directly, not its stock positions, but it still has plenty of skin in this game, and investors will want to monitor how these shares perform. 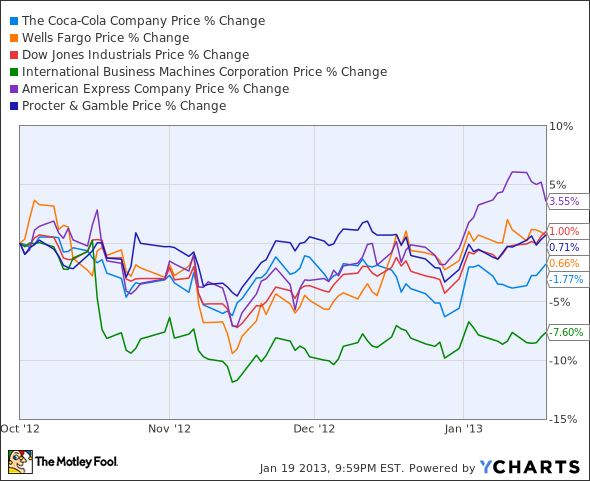 It almost goes without saying that, since they form the core of Berkshire Hathaway, it’ll be crucial to watch developments in those directly held subsidies. Since they aren’t publicly traded, they’re a little more off-radar, but there will be enough information about them when the company as a whole reports its 4Q February 1. If that quarter is a good one, and the Dow’s still rising, look for Buffett’s baby to continue adding inches to its height.

The article Can Buffett’s Baby Crawl Above Its 52-Week High? originally appeared on Fool.com.