When screening for investments, I often like to look at the forward price-to-earnings ratio as a metric that gives me an estimated glimpse into a company’s future earnings power relative to its current price. If I find a disconnect — when a company looks expensive when considering its trailing P/E ratio but fairly valued or even cheap when looking at its forward P/E — I pay a little more attention and dig deeper. 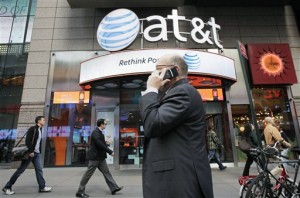 If the company has a bad quarter or a one-time item or charge that depressed earnings, I often like to determine if the problematic earnings are likely to be an ongoing trend or just a unique, isolated incident that is making a company look more expensive than it is compared to its more normalized earnings. Below are three companies that may currently meet this criteria.

With a trailing P/E ratio of around 29, AT&T Inc. (NYSE:T) looks ridiculously expensive. But is this the case? After problematic earnings attributed to factors such as underfunded pension problems (which caused a big drop in earnings), AT&T Inc. (NYSE:T)’s true earnings power is being temporarily depressed — giving the company an abnormally high P/E, as well as an abnormally high payout ratio of well over 100%. Some people are screaming that the dividend isn’t safe because of this “unsustainable payout ratio.”

Looking forward, with more normalized earnings (earnings that aren’t plagued and dragged down by one-time charges and more temporary problems) in mind, another picture emerges. Analysts expect AT&T Inc. (NYSE:T) to earn $2.52 per share going forward, giving the company a cheap forward P/E ratio of only around 14. This also brings the company’s payout ratio going forward to a much more sustainable level of around 70%.

Another company that faced a temporary drop-off in EPS was Johnson & Johnson (NYSE:JNJ). This drop-off was largely due to $1.24 per share in non-recurring items. Remove this temporary anchor on earnings and then the company would be seeing more normalized EPS of $5.10. Unfortunately, due to the special items, Johnson & Johnson (NYSE:JNJ)’s EPS were only $3.68 — giving the company a trailing P/E of around 23.

Considering the company’s annual EPS estimates of $5.41 going forward, however, Johnson & Johnson (NYSE:JNJ) looks much more attractively valued at current levels– with a forward P/E of around only 15.

Even after a recent pop, this tech giant is cheaper than it seems…

Another company that saw one-time problems drag down earnings temporarily was Microsoft Corporation (NASDAQ:MSFT). A few quarters back, the company had to write-off a bad acquisition from previous years, which knocked off some of its more normalized annual earnings power. In its most recent quarter, however, with an increase of around 19% in EPS, the company is clearly back on track, and was rewarded by the market with some capital appreciation.

Microsoft Corporation (NASDAQ:MSFT) is currently priced at around 17 times trailing earnings, but looking at more normalized earnings going forward of an estimated $2.75– the company is priced at only a little under 11 times forward earnings.

Companies can have bad quarters or experience temporary problems (such as one-time items and other isolated incidents) that render their earnings weaker than normal. If these problems are simply “bumps in the road” and are not continual and are not characteristic of the company’s more normalized earnings power, they may provide an opportunity for an investor to accumulate shares of a wonderful company for cheaper than it looks.

If the company can manage to move right along and get back to generating its more normalized earnings going forward– meeting analyst expectations– then you can buy it now while everyone else is whining about overvaluation. And then, watch as the share price catches up further down the road, giving you some nice little gains after a few normal quarters.

Do keep in mind, however, that there is less of a margin of safety in these companies, and if one of the company’s earnings difficulties becomes a continuing problem, you will be the one left holding the overvaluation bag in the end.

The article 3 Blue Chips That May Be Cheaper Than They Seem originally appeared on Fool.com and is written by Joseph Harry.

Microsoft Corporation (MSFT): Is A Payoff Hidden In That NOOK?
Monthly Newsletter Strategy
Download a free copy of our newsletter and see the details inside!
Hedge Fund Resource Center
Billionaire Hedge Funds