The Mexican government is looking to increase the quality of Mexico’s telecom services after an OECD study found that Mexico is the second most expensive nation in Latin America. America Movil SAB de CV (ADR) (NYSE:AMX) owns the old Telmex monopoly and citizens would like to see better service and decreased prices. At the same time, Mexicans are adopting smartphones with a passion. Some arepredictingthat smartphones will have a 70% market share by 2015, about double the estimated penetration of 2013. 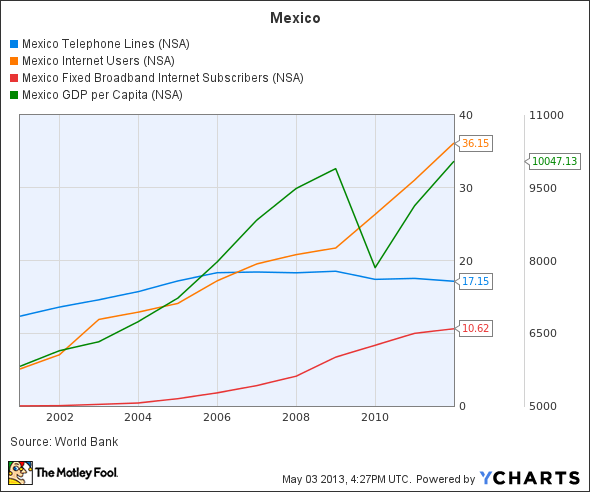 The Mexican government recently passed a law that will allow the government to force asset sales on companies with more than 50% market share and allow foreign companies to own 100% of Mexican telecoms.
This makes the nation even more attractive for foreign investors. 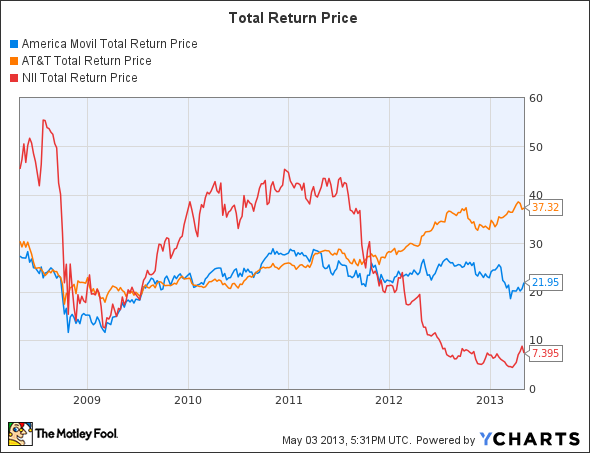 America Movil SAB de CV (ADR) (NYSE:AMX) is stuck in damage control mode. Mexican telecom reform is mainly targeting America Movil SAB de CV (ADR) (NYSE:AMX) as it is the original Telmex monopoly with a different name. At the end of Q1, 2013 it had 54% of the Mexican postpaid wireless market and 72.8% of the prepaid segment. As of 2011, America Movil had 75.3% of the fixed line market. All of these segments are over the 50% mark set in the new law. In addition to these regulatory difficulties in Mexico, Columbia recently limited the company from bidding from some new spectrum. This will hurt the roll out of its new Colombian 4G network.

All of the company’s news is not negative. In Q1, 2013 its wireless base grew 6.9% year over year (yoy). Its current return on investment (ROI) of 20.2% and profit margin of 11.3% are very strong. With expected 2013 earnings per share (EPS) of $1.98, it trades at forward price to earnings (P/E) ratio around 11. This valuation is very low and shows that the market is started to price in decreases in the company’s margins and revenues.

As the telecom reform law is fleshed out and implemented, America Movil’s stock will be very volatile. There is a good chance that all of this volatility will push the stock down to unreasonable levels. It is a good company to keep an eye on. Politics is a messy business. Carlos Slim has a net worth in the billions and a strong vested interest in America Movil SAB de CV (ADR) (NYSE:AMX). It would be unwise to underestimate the ability of America Movil’s billionaire owner to swing events in his favor.

AT&T Inc. (NYSE:T) has discussed selling its 9.6% stake in America Movil SAB de CV (ADR) (NYSE:AMX) along with a number of cellphone towers. AT&T Inc. (NYSE:T) is enjoying continued growth in the U.S. and plans to focus its attention on its core market and investors.

AT&T Inc. (NYSE:T) is happily riding the latest wave of technological growth. There are number of popular smartphones available with full 1080p resolution. These phones can stream full HD videos and this will only increase demands for AT&T’s data services. In Q1, 2013 data revenue was up a full 21% yoy. By the end of 2013 management expects 90% of AT&T’s first major 4G LTE deployment to be completed, further growing data revenue.

With an estimated 2013 EPS of $2.51, AT&T is trading at a forward P/E ratio around 15. As an investment it is more attractive than America Movil with a more stable regulatory environment. Its total debt to equity ratio of 0.76 is also a step below America Movil’s 1.63. AT&T’s ROI of 4.7% isn’t amazing, but its profit margin of 8.9% is healthy enough.

NII Holdings, Inc. (NASDAQ:NIHD) is active in Mexico with its Nextel brand. The company is stuck a generation behind its competitors and its pain will continue. It recently announced plans to sell Nextel Peru. This sale will help to finance its 3G roll out in Brazil and Mexico. The company faces a very difficult battle. Competitors like American Movil are already introducing their 4G networks.

Mexico retained its position as the largest single country based on number of subscribers. In Q1, 2013 it was able to add 15.9 thousand new subscribers for a total of 3.9 million subscribers. Together Brazil and Mexico provide the majority of the company’s 11.5 million subscribers. With competition in the Mexican market to increase, old technology and a large total debt to equity ratio of 2.1, NII Holdings, Inc. (NASDAQ:NIHD) is best avoided.

Mexico continues to grow and its citizens continue to buy data-intensive smartphones. The telecom reform law has opened up competition for domestic and foreign competitors. America Movil SAB de CV (ADR) (NYSE:AMX) will suffer from the increased competition, but it is a good company to watch as the market may overestimate negative trends. NII Holdings is struggling with older technology. AT&T has interests in the Mexican market, but its growing data sales in the U.S. that make it the most attractive investment.

The article Is Mexico The New Land of Telecom Opportunity? originally appeared on Fool.com and is written by Joshua Bondy.

How AT&T Inc. (T) Squanders Your InvestmentVerizon Communications Inc. (VZ) Is a Buy: Here’s Why