We maintain a database of 13F filings from hedge funds and other notable investors and use this information to develop investing strategies; one of our findings has been that the most popular small cap stocks among hedge funds generate an average excess return of 18 percentage points per year (learn more about our small cap strategy). We attribute this to large institutional investors such as mutual funds paying less attention to small caps, making them less efficiently priced. Our database also allows us to pick out individual fund managers’ top picks in a number of areas, including small caps, for investors to use as ideas for further research. Here are five stocks with market capitalizations between $1 billion and $5 billion which billionaire Louis Bacon’s Moore Global owned at the end of December (or see the full list of stocks the fund reported owning):

Bacon more than doubled the size of his position in Assured Guaranty Ltd. (NYSE:AGO), a $3.8 billion market cap insurer of public finance and infrastructure securities, to a total of over 5 million shares. The stock trades at a small discount to the book value of its equity with a P/B ratio of 0.8. The stock fell somewhat between 2010 and the beginning of 2012, likely on concerns over municipal default, but has since recovered. Invesco Private Capital reported owning close to 20 million shares of Assured Guaranty Ltd. (NYSE:AGO) as of the end of December (check out Invesco’s stock picks). 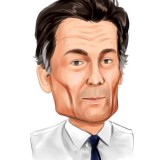 Bonus Biotech Stock Pick: You can also find a detailed bonus biotech stock pick that we expect to return more than 50% within 12 months.
We may use your email to send marketing emails about our services. Click here to read our privacy policy.
Related Insider Monkey Articles
Linn Energy LLC (LINE), SandRidge Energy Inc. (SD) Among The Three Companies...

Should You Buy PetroLogistics LP (PDH)?