The war between the believers and the naysayers continues. Some view solar as the crazy idea of a few environmentally charged bureaucrats, searching for draconian control markets through tariffs and rebates. Others view solar as the best thing since sliced bread. In the midst of all of the rhetoric, solar continues to come out of its slump.

Why is solar looking up?

Deustche Bank recently put out a report with a positive outlook for solar in countries like Italy and India. In nations with a large amount of solar radiation and dilapidated electricity grids that cause 600 million person blackouts, distributed solar energy makes sense. At the same time, technology continues to advance, driving down solar costs.

Inflation is normally seen as the enemy, but it can be a wonderful thing. A solar installation is a fixed cost and can be financed by fixed rate debt. At the same time, inflation continues to increase electricity costs.

If a corporation decides to build a solar installation to power a factory with an expected a life span of 25 years, the cost of its solar energy will remain stable while utilities continue to increase rates. The differential between these two rates means that a solar installation will become cheaper over time.

How can you be ready?

There are not many ways to invest in the solar industry. There is talk of changing some legalities so that REITs could be constructed based on solar assets. Until this happens, staying informed about solar manufacturers is one of the best ways to invest. 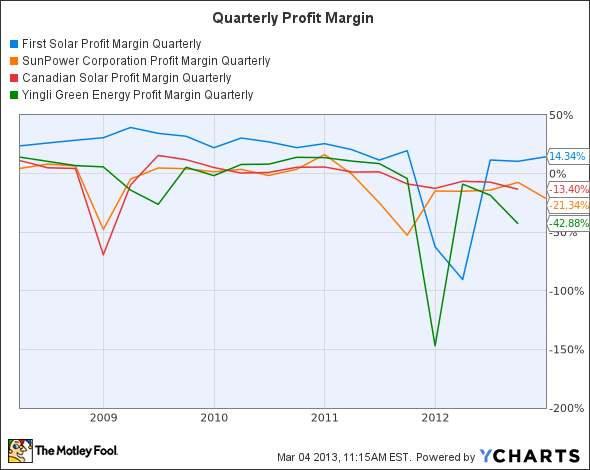 First Solar, Inc. (NASDAQ:FSLR) is one of the better firms with a total debt to equity ratio of just 0.16. In a market where many companies are stuck with high debt loads, First Solar stands out. The downside is that, even with a high gross margin of 33.1%, the company still posted a loss in 2012 due to a bad first quarter.

The next couple years are looking up, and analysts expect the company to be profitable in 2013. The firm’s thin film technology is not as efficient as competing technology, but First Solar, Inc. (NASDAQ:FSLR) is still expected to make money. Currently, the company, a value play, can be picked up at a price to book ratio below 0.65.

SunPower Corporation (NASDAQ:SPWR) is not a perfect company, but it is one of the better solar manufacturers. The firm’s total debt to equity ratio of 0.83 is not excessive relative to those of its rivals. The company’s high-efficiency technology and strategic backing by the French oil company Total are major positives.

At the same time, SunPower Corporation (NASDAQ:SPWR) isn’t expected to turn a profit immediately. Even with a gross margin of 15.2% its EBIT margin is still -10.2%. The firm’s use of leasing programs and relations with a number of U.S. firms shows that it continues to make headway at home. Over the long term, their focus on utility scale installations should pay off, but for now utilities remain conservative.

Canadian Solar Inc. (NASDAQ:CSIQ) is laden with risk and debt. Its total debt to equity ratio of 2.85 is very high. A look at its return on investment is not very encouraging either; at -24.00%, Canadian Solar has the worst return on investment of any of the firms mentioned here. The company has recently announced new projects in North Carolina and Tanzania, but these projects are not significant enough to change the prospects of the firm. Even at a price to book ratio of 0.42, it is best to ignore Canadian Solar.

Yingli Green Energy Hold. Co. Ltd. (NYSE:YGE) is a major Chinese solar producer with a huge advantage on its home turf. Economics in China is never about pure profit. Social stability through job creation is a major goal of the Communist Party of China. Yingli Green Energy Hold. Co. Ltd. (ADR)benefits from government support through cheap loans and the ability to sell its low cost products in China. Tariff warfare between the U.S. and China only increases Yingli’s advantage.

The company as a whole is laden with debt, given its total debt to equity ratio of 4.39. Indeed, with a return on investment of -15.0% and EBIT margin of -27.5%, the Chinese government has kept Yingli Green Energy Hold. Co. Ltd. (ADR)alive. The company may become a profitable investment, but it is unclear how it will survive the removal of excess capacity in the industry. A successful investment in Yingli Green Energy Hold. Co. Ltd. (ADR)requires an in-depth understanding of China and how its government picks winners and losers. This political aspect makes Yingli an investment better left for China experts.

Investing in solar manufacturers is not a carefree feat. You must be willing to endure a couple years of stress until the market really comes back. With that said, First Solar, Inc. (NASDAQ:FSLR) and Sun Power are two good manufacturers to consider given their strong gross margins and manageable debt loads.

The article Are You Ready for Solar’s Growth? originally appeared on Fool.com and is written by Joshua Bondy.