Hedge funds had a pretty solid run for much of this year, generating positive returns for seven or eight consecutive months (depending on the source) before that streak came to an end in October. The third-quarter was a particularly strong one for the industry, as evidenced by our own data. 659 funds in our system which filed for the June 30 13F reporting period held long positions in at least 5 non-micro-cap stocks, and those funds’ long bets posted 8.3% gains in the third-quarter based on the size of their positions on June 30. That easily bested the performance of S&P 500 ETFs, which returned only 3.3% for the period. Where hedge funds tend to falter is on the other positions in their portfolios (options plays, bonds, etc.), which are there to limit downside risk, but also limit upside potential. That’s why we recommend investors consider hedge funds’ top long bets and share them with readers throughout the year. In this article, we’ll analyze the top picks and performance of Sander Gerber‘s Hudson Bay Capital Management and will take a look at some of its stock picks including CF Corp, CBS Corporation, and Terraping 3 Acquisition Corp.

Hudson Bay’s equity portfolio was valued at $4.16 billion on June 30 and consisted of 135 long positions in companies with a market cap of at least $1 billion. Based on the size of those holdings on June 30, those positions delivered weighted average returns of 12.5% during the third quarter, stretching its quarterly winning streak when using our methodology to four. The quarter was impressive considering the fund had more qualifying holdings than any of the other funds which finished ahead of it in returns. Therefore, one exceptional stock couldn’t carry its entire portfolio as can be the case with more concentrated portfolio, it had to be a strong performance pretty much across the board.

It should be noted that our calculations may be different from the fund’s actual returns, as they do not factor in changes to positions during the quarter, or positions that don’t get reported on Form 13Fs, like short positions. In this article, we’ll take a look at four of the favorite stock picks of Hudson Bay and see how they performed during the third quarter.

First up is CF Corp (NASDAQ:CFCO), which was a new addition to Hudson Bay’s portfolio in the second quarter. The fund held 4.13 million shares of the stock as of June 30, valued at $41 million. That ranked it as the fund’s third-most valuable long position, behind only the Yahoo/Alibaba duo. Shares of the blank check company, which began trading on the Nasdaq this year, gained 2% during the third quarter. Hudson Bay was one of 21 hedge funds in our system which bought into the stock’s Q2 IPO. Some of the other funds which went long the stock include Blue Mountain Capital, Angelo Gordon & Co, Canyon Capital Advisors, and Ivory Capital (Investment Mgmt). 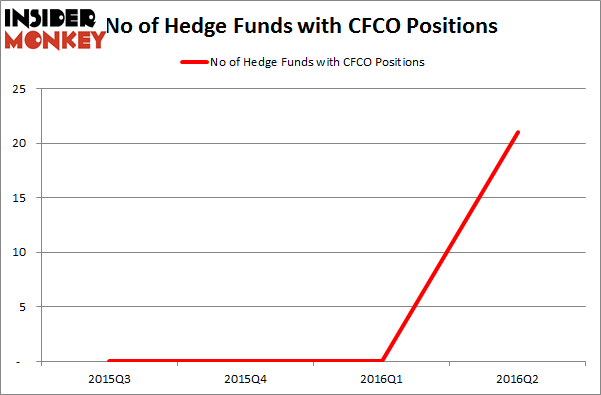 Next up is CBS Corporation (NYSE:CBS), which returned 0.9% during the third quarter. Hudson Bay added 280,000 shares of the stock to its portfolio during the June quarter, valued at $15.24 million at the end of June. The stock posted meager returns during the third quarter, but has gained 22% this year. Heading into the third quarter of 2016, a total of 59 of the hedge funds tracked by Insider Monkey were bullish on CBS, a 3% dip from the end of the first quarter of 2016. Among those funds, Glenview Capital held the most valuable stake in CBS Corporation (NYSE:CBS), which was worth $397.3 million at the end of the second quarter. On the second spot was Chieftain Capital which amassed $372.9 million worth of shares. Moreover, Highfields Capital Management, Mason Capital Management, and Gruss Asset Management were also bullish on CBS Corporation (NYSE:CBS).

Lastly, we’re going to take a peek into the hedge fund’s action regarding Occidental Petroleum Corporation (NYSE:OXY). The company was another new addition to the fund’s portfolio during the second quarter, and returned 0.6% during the third quarter. Hudson Bay owned 195,800 shares on June 30, with a value of $14.80 million. Occidental Petroleum Corporation (NYSE:OXY) was in 11 hedge funds’ portfolios at the end of the second quarter of 2016. OXY investors should be aware of an increase in support from the world’s most elite money managers of late. There were 9 hedge funds in our database with OXY positions at the end of the previous quarter.

The largest stake in Occidental Petroleum Corporation (NYSE:OXY) was held by Levin Capital Strategies, which reported holding $207.5 million worth of stock at the end of June. It was followed by Astenbeck Capital Management with a $74 million position. Other investors bullish on the company included First Pacific Advisors LLC, Adage Capital Management, and D E Shaw.