Electronista, which provides updated news related to tech, mobile phones, GPS etc, is reporting that the United States Department of Defense (DOD) is ordering 650,000 iOS devices. Reports show the breakdown as 120,000 iPads, 100,000 iPad minis, 200,000 iPod touches, and the remaining 210,000 filled by various iPhones. It should be mentioned that Electronista also reports that the actual order of these devices is being delayed because of the sequester but will be completed when Congress resolves the remaining issues.

It appears that Research In Motion Ltd (NASDAQ:BBRY)‘s new BB10 device has caused the DOD to change direction and go with Apple Inc. (NASDAQ:AAPL)‘s devices instead. Electronista reports:

So, what exactly will these 650,000 iOS devices be used for? They are expected to be used in many situations, with over 50% of them “headed to the battlefield, afloat, and to associated support commands.” The remaining units will be used in office settings in such places as the Pentagon. This may seem like a lot of devices, but if the average device cost $800 (and it shouldn’t be that much), its only $520 million. Not to belittle half a billion dollars, but considering Apple’s revenues in the TTM are around $165 billion, the actual purchase probably won’t affect Apple Inc. (NASDAQ:AAPL) much.

Research In Motion Ltd (NASDAQ:BBRY) may feel the effects of this more than Apple. This is just speculation on my part entirely, but let’s say the DOD had planned on buying an additional 180,000 Research In Motion Ltd (NASDAQ:BBRY) devices (to match the 650,000 that they are buying from Apple) in 2013. If the average device was $400 (half of what we discussed for Apple), the total would be $72 million. The estimated $520 million Apple may generate from this deal is only .32% of their TTM of revenue. If the DOD had bought those additional 180,000 from BlackBerry, it would have generated .57% of their TTM of revenues. 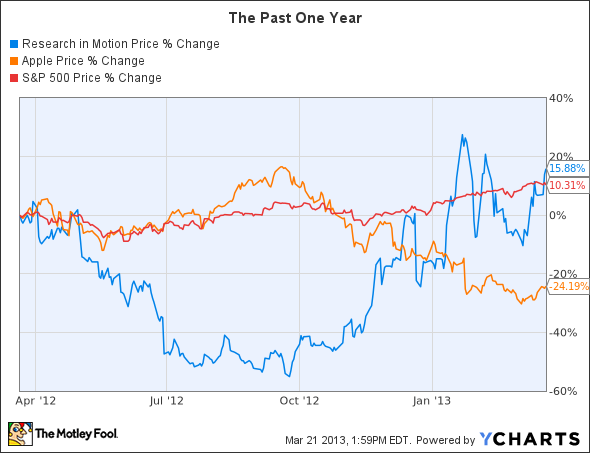 One interesting topic to note is how Thorsten Heins, esearch In Motion Ltd (NASDAQ:BBRY)‘s CEO, recently did an interview in which he stated Apple was “standing still” and eluded to how they used to be a successful company. He discussed how the iPhone’s interface is five years old and how Apple is basically outdated. Almost instantly this report comes out that because of BlackBerry’s advancing technology, the DOD is moving in a new direction with Apple Inc. (NASDAQ:AAPL). I think we would all appreciate something a little more improved by Apple (as the last few upgrades have been fairly minimal), but apparently Apple may be wise to not move so quickly.

I believe both companies are solid and may offer good opportunities for the right investors. With the recent (and upcoming) releases of the BB10, esearch In Motion Ltd (NASDAQ:BBRY) may be a valid investment in the short term. Apple Inc. (NASDAQ:AAPL), despite its short term loss, may still be a valid long term investment.

The article Department of Defense Replaces BlackBerry With iOS? originally appeared on Fool.com and is written by Tyler Wofford.