Apple Inc. (NASDAQ:AAPL) shows a “stingy” dividend yield of 2.5%, while Disney’s is approximately 1.3%. Now, its hard to place blame on a company whose stock has increased 22.3% over the past twelve months and nearly 7% YTD, but Google does not issue dividends at all. The chart below will show how these companies earnings yield is just the opposite of their P/E. Typically, the higher the P/E, the lower the earnings yield. 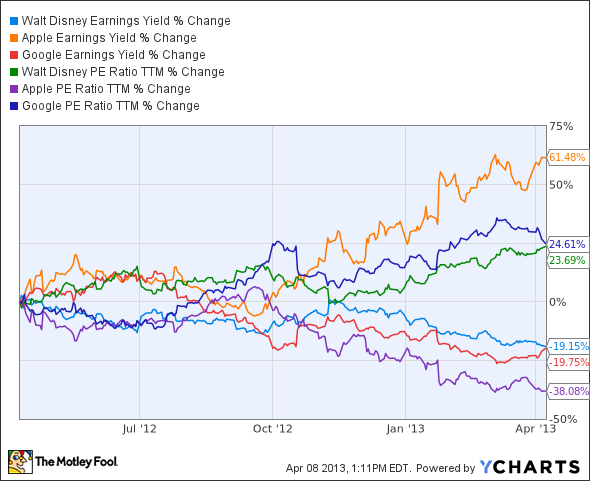 Apple Inc. (NASDAQ:AAPL) may have more than enough cash to build a project such as the one described above, but will its shareholders become agitated with its dividends and a falling stock? Apple Inc. (NASDAQ:AAPL) is very cheap, but may need to remove the salt from those that feel wounded by its falling stock and high dividend expectations. Google and Disney are more expensive, but have recently performed better with their stocks, and have spent/are spending less on their projects.

Bonus Biotech Stock Pick: You can also find a detailed bonus biotech stock pick that we expect to return more than 50% within 12 months.
We may use your email to send marketing emails about our services. Click here to read our privacy policy.
Related Insider Monkey Articles
Apple Inc. (AAPL): Who Would Have Guessed…Best Buy Co., Inc. (BBY) Best S...