As investors, it pays to keep an eye on industries that are growing quickly.  Amazon.com, Inc. (NASDAQ:AMZN)’s ascent to grace as the king of e-commerce was nicely complemented by a nascent dot-com boom and consumers that were newly connecting to the internet.  Netflix, Inc. (NASDAQ:NFLX)’s ability to take down Blockbuster was largely due to the aggressive expansion of the DVD industry.

Luckily for us, IBIS World released a special report last April that listed the 10 fastest-growing industries in the United States.  The metric they based the rankings on was overall industry revenue growth during the next five years.

Here is that list of industries, shown with the fastest-growing on top. 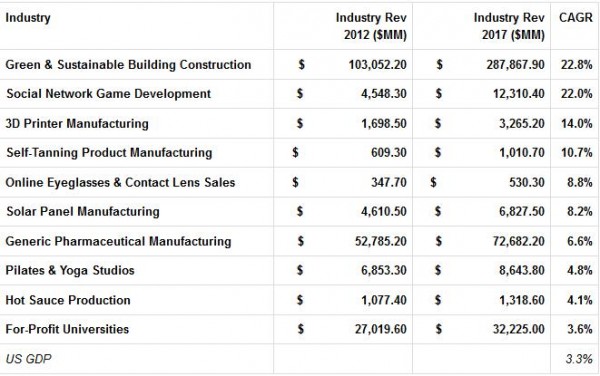 There are a few important things to take note of before we start digging into the industries.  First, the list is based off of compound annual growth rate, not absolute industry growth.  For instance, social network game development is ranked #2 on the list and is predicted to rise at 22% per year through 2017.  But even after all of that growth, it will still be less than 1/4 of the absolute size that the generic pharmaceutical manufacturing industry is today.  So keep in mind that we’re dealing with relative change rather than absolute change.

The other thing that stands out is that Green & Sustainable Building Construction was not only the fastest growing industry on the list, but it was also the largest market.  The report anticipates a whopping $180 billion of growth will be seen in just the next five years, which will nearly triple its total size today.  If you start to notice a lot more Energy Star rated appliances and energy-efficient air conditioners, now you know why.

How to play these trends

A strong macroeconomic tailwind can often be a best friend to investors.  A rising tide can raise many ships, meaning that multiple companies can simultaneously benefit from a growth in demand for the products in their industry.  This is especially true if the companies target different types of customers.

As an example, Stratasys, Ltd. (NASDAQ:SSYS) and 3D Systems Corporation (NYSE:DDD) are competitors in the 3D Printer Manufacturing industry.  Stratasys has targeted larger, industrial customers that have needs for more complex machines using fused deposition modeling.  Conversely, 3D Systems is making strides to push into the consumer market, now selling their Cube 3D personal printer for only $1,299.  So who’s going to be the ultimate winner in this race?  The answer is most likely “both.”  With top line industry growth of 14% per year, there’s enough room for both of these companies to ink up some new business.

Another play could be in the Pilates & Yoga Studios industry.  Interestingly, there are not yet any nationally-branded yoga studios that have commanded a significant stake of this market (a free tip for anyone interested in the idea!)  But there are indirect beneficiaries from the neo-yogi movement.  Lululemon Athletica inc. (NASDAQ:LULU) retails high-end apparel that is designed specifically for yoga and pilates enthusiasts.  They have received incredibly favorable customer feedback, and even promote their brand by morphing their stores into studios to offer free yoga classes from local instructors.  A more creative consideration could be  Whole Foods Market, Inc. (NASDAQ:WFM). Yoga and pilates activists are often health-conscious consumers as well.  This movement bodes well for Whole Foods, who is the first nationally certified organic grocer in the US.

Of course, in you want to get in on the fastest growing companies in America, don’t expect to buy them for pennies on the dollar.  “Obviously good ideas” are often priced at higher multiples than the market at large.  Take a look at a comparison between the stocks mentioned above and the S&P sector averages:

The fastest-growing companies demand higher prices per dollar of earnings than each of their respective sector averages.

Place your bets on the hare

The US gross domestic product grew a pathetic 0.6% per year between 2002 and 2007.  Fortunately, due to advances in technology, a newfound source of cheap energy, and a recovering housing market, US GDP is forecast to grow 3.3% a year in aggregate over the next five years.  If the US recovery continues as planned, many companies (and stocks) will do very well.

Investing in growth stocks is not without its own set of risks.  When highly-valued companies miss earnings estimates or fail to execute as hoped, they are often punished with excruciating one-day drops in stock price.  But if you’ve got a stomach that can handle the volatility, that rising tide could raise a few ships in your portfolio.

The article America’s Fastest Growing Industries originally appeared on Fool.com and is written by Simon Erickson.

Mercadolibre Inc (MELI): Spice Up Your Portfolio With the Latin eBay