American Eagle Outfitters (NYSE:AEO) tumbled over 12% earlier this week on weak earnings. But the company remains one of the biggest apparel retailers that targets teens and young adults, with its prime consumer being between the ages of 15 and 25, operating some 900 stores.

Even though clothes tend to be required items for most, the industry has been fairly volatile of late. American Eagle Outfitters (NYSE:AEO)’s recent tumble isn’t the first time the stock has nauseated investors with its roller-coaster like plunge over the past year.

However, with the recent fall, the stock is now down near its 52-week lows.The reason for the latest sell-off was another guide down for EPS. American Eagle Outfitters (NYSE:AEO) noted that it expects to earn $0.10 per share in fiscal 2Q, which is less than half of what analysts were previously expecting. What’s more is that same-store sales are expected to fall 7% year-over-year.

Part of the problem is that major apparel retailers are seeing markdowns due to inventory buildups related to the unseasonably cool and wet spring. However, American Eagle Outfitters (NYSE:AEO) does expect square footage growth of 3% in fiscal 2014, planning to open upwards of 55 new stores.

One of American Eagle’s biggest competitors is Abercrombie & Fitch Co. (NYSE:ANF). Abercrombie has been on its own roller coaster ride, trading down near $25 last year before nearly doubling by today. Abercrombie has over 1,000 retail stores across four brands.

Abercrombie & Fitch Co. (NYSE:ANF) does pay investors a modest 1.6% dividend yield. It has over $550 million in cash, with debt of only $200 million, which should support a dividend increase in the future. Its current dividend payout ratio is less than 30%.

Urban Outfitters, Inc. (NASDAQ:URBN) has three key stores: Urban Outfitters, Anthropologie, and Free People. For the April-ended quarter, the company posted EPS of $0.32, compared to $0.23 for the same period last year, and beating consensus of $0.29 EPS.

For fiscal 2013, comp sales were up 7% driven by a 31% increase in direct-to-consumer net sales. As well, its Anthropologie brand is gaining traction as it offers a blend between fashion and casual apparel.

Unlike American Eagle Outfitters (NYSE:AEO), Urban Outfitters, Inc. (NASDAQ:URBN) has a solid international presence. The retailer also plans to continue robust store openings, expecting to open 35 to 40 in fiscal 2014 after opening 57 locations in 2012 and 49 and 2014. The retailer boasts a balance sheet that includes no debt and $270 million in cash.

Back to school is coming and I feel fairly confident that people have no plans to stop wearing clothes anytime soon. Question is; where do we invest? Despite American Eagle’s numerous steep pullbacks of late, the stock still has a beta that’s less than 1 (suggesting lower volatility), which is well below Abercrombie & Fitch Co. (NYSE:ANF)’s 1.7.

With the recent pullback in American Eagle’s stock, it’s now trading with a P/E that’s at a 15% discount to Abercrombie. 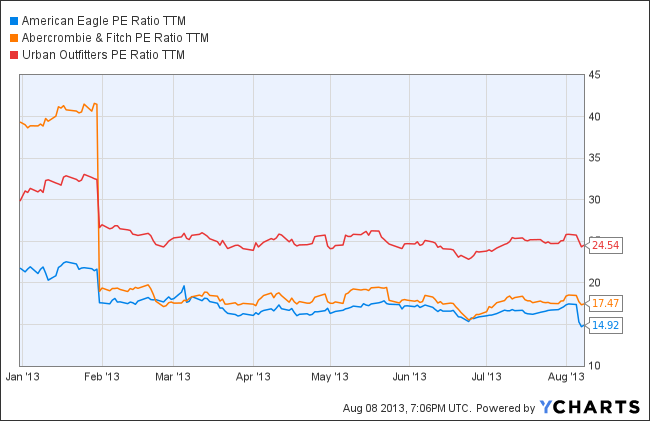 American Eagle Outfitters (NYSE:AEO)’s PEG ratio is also now at an ultra low 0.3. However, Abercrombie & Fitch Co. (NYSE:ANF)’s is even lower, at only 0.1. And Urban Outfitters, Inc. (NASDAQ:URBN)’s is still well below one at 0.5. All three of these companies look to be solid investments in the apparel sector. There’s no promises that there won’t be more volatility to come for the industry, but it does appear that the apparel retailers are offering investors an opportune time to jump into the industry.

Marshall Hargrave has no position in any stocks mentioned. The Motley Fool recommends Urban Outfitters. Marshall is a member of The Motley Fool Blog Network — entries represent the personal opinion of the blogger and are not formally edited.

The article The Roller Coaster Ride of Apparel Retail originally appeared on Fool.com and is written by Marshall Hargrave.

American Eagle Outfitters (AEO), The Gap Inc. (GPS): Is a Plunge in This Apparel...