As the world readies for a tapering of QE3, interest rates have adjusted for an eventual Fed exit. The 10-year US Treasury yield sits at 2.53%, up from 1.6% in May. 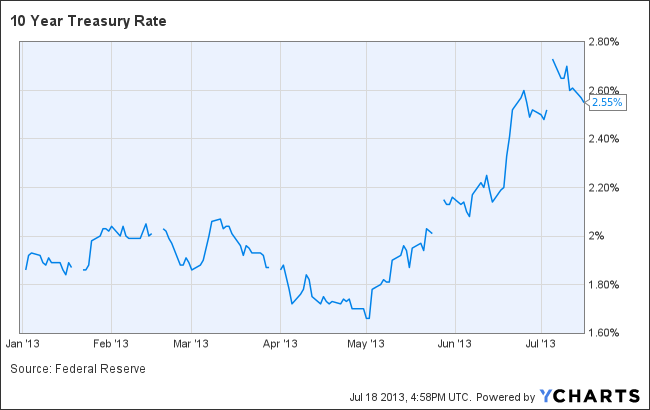 Long-dated maturities see the biggest change. Mortgage-backed securities took a beating on the Fed’s words of a taper, but yields have since come off their highs.

Let’s examine how this plays out for mREIT investors.

It first appeared that the Federal Reserve would begin tapering by the end of 2013, if not September 2013, a month cited in several analysts’ reports. The market responded quickly, pushing yields higher.

Since then, Bernanke has stepped off the tapering talk. He said yesterday that the Fed’s purchases “are by no means on a preset course,” adding that the Fed will be “responding to the data.” In essence, Bernanke’s not sold on the taper if economic reports show a slowing economy.

Bernanke’s latest move is genius. In announcing a potential tapering of asset purchases, Bernanke forced the markets to move rates up, without any exit from the Fed. The Fed is buying the same amount of U.S. Treasuries and mortgage-backed securities, however the market responded as if the Fed pulled out completely.

Bernanke slowed any bubble that may have been forming, all the while enabling the Fed to justify perpetual asset purchases in excess of $1 trillion each year.

Why mREITs should succeed

Mortgage REITs are the most exposed to higher rates. Mortgage REITs borrow in the short-term to invest in long-term securities. They use leverage, up to 8x their equity, to generate double-digit yields for investors.

In effect, an mREIT will borrow at 2% and lend (invest in MBS products) at 4-5%, paying out the spread to investors.

Bernanke’s latest signal suggests that he’s happy with rates on the long-end of the yield curve. Higher rates dampen discussion about a real estate bubble, while slowing speculative credit issuance and record borrowing.