In Greek mythology, the Amazons were a tribe of fierce warrior women. By most accounts, the Amazon River — which is the second (after the Nile) longest river, but, by far, the most powerful in terms of water flow — was named after the mythological warriors.

Its forward P/E is stated as 73, which seems reasonable. Well, “Amazon reasonable.” However, I don’t believe it’s realistic to think Bezos is going to change course that much within the year, and “allow” the company to show significant earnings, rather than keep plowing as much money as he can get away with back into growth. And, hey, if I were he — and Wall Street was giving me a leash as long as the Amazon River — I’d do the same. How many founder-CEOs of start-ups have ever been given a pass on conventional valuation measures for 18 years?!

As long as the analysts are playing nice-nice and shareholders continue to believe that big — make that HUGE — earnings and free cash flow will eventually arrive, Bezos is smart to run with it. The $61 billion (Amazon’s annual revenue) question, of course, is how much more slack exists in that leash? Personally, I think Bezos is well-attuned — remember, he used to work on Wall Street — to how fast and far Amazon can run with it without being jerked back in agony because the slack is gone.

However, with any stock extremely overvalued by conventional valuation measures, shareholders should always be ready to pull the trigger. If and when the tide turns on such a stock, it turns with a vengeance. I believe it’s more likely than not that Amazon will “grow” into its P/E and other conventional valuation measures. And that’s largely thanks to it being given the opportunity to do so.

To say Bezos has managed Wall Street extremely well would be akin to saying Amazon has a “decent” selection of books.

I’ve read a barrage of bewildered comments since Amazon’s earnings release — and subsequent stock price rise, despite “disappointing” earnings. While some were just incredulous, others were angry citing unfairness — especially compared to Apple Inc.  (NASDAQ:AAPL)’s valuation and its 30%+ stock price drop since October.

Granted, Apple has always been given a too-short leash. Until very recently, it was cranking out huge earnings increases quarter after quarter, year after year, and yet its P/E remained (and remains) stuck at a pitifully low level.

One must remember, though, that analysts are always looking ahead. Apple is a great company, and I believe it has game left in it. Another mega-hit product or two are in the works, in my opinion. However, its behemoth size combined with its business model makes it more difficult to keep growing. Amazon doesn’t need to roll out a hit product every few years. There is still huge growth left in online retailing. In fact, the potential for online retailing seems as close to limitless as one can get. Yes, the retailing margins are super-thin, but the site’s also a portal into higher-margin businesses (most notably the cloud, but also video streaming, which eventually should be higher-margin).

The most important thing to remember is that analysts are human. Could they be expected to foresee a year or two in advance the hugely disruptive iPhone coming out in 2007? How about predicting in 2008 or 2009 that Apple would strike gold again with the iPad in 2010? It is simply easier for them to imagine Amazon’s future potential.

The fact that analysts are human leads to the next point…herd behavior. You could also term it “CYA.” This is a commonly-heard acronym in business and other fields. For those who don’t know it, it stands for “cover your a&^.”

Let’s say you’re one of 15 analysts covering a particular company. The other 14 are bullish. The P/E is at nosebleed level. You are new to covering the stock. You are not so sure about the company. Are you going to be the odd guy (or woman) out? If you’re wrong, you could be in deep water. (“Your bad call made our firm look bad — and cost client money.”) If you are wrong with the herd, you’ll likely suffer no consequences.

This heard or CYA behavior is largely why once a company’s valuation measures get established, they are slow to move (covered in next section). Unless there is a material change, analysts typically just update their models each quarter.

I’m not saying I necessarily agree with the valuation thesis, but these charts should provide a good idea of what is going on. (Source: YCharts)

Obviously analysts are disregarding the most conventional valuation measure, P/E ratio. This isn’t necessarily a bad thing (in general, not just in regard to Amazon). Reported earnings reflect accounting practices — and may or may not closely track cash, which is a “real” measure of profit.

Operating cash flow (OCF) and free cash flow (FCF) are more accurate reflections of how well a business is performing. OCF is the cash before investing activities and financing are taken into account.

In Amazon’s case, P/E and FCF are not being used as valuation measures because analysts (and some investors) are on-board with the premise that “buying” market share and investing in growth will pay off in the long-term. (Yes, that begs the question when does the long-term arrive?) 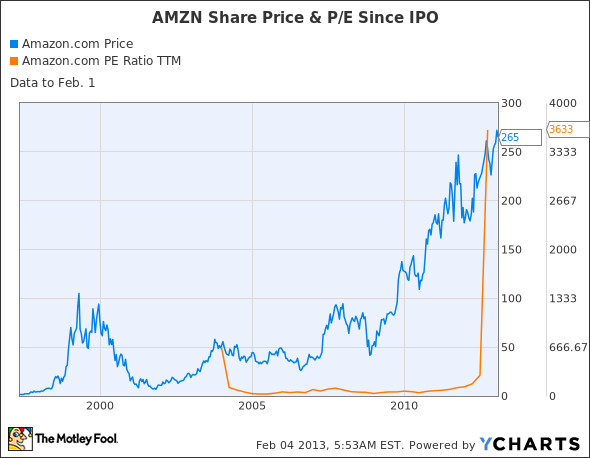 This is the ratio analysts have been using to value the stock. It is quite common for this ratio to be used for start-ups and newer companies that have either negative earnings or are in the early stages of generating earnings.

The unique thing with Amazon is just how long this ratio has been used. Again, that speaks to the super-strong faith many have in the company.

Look at how steady the price/sales ratios have been over the 10- and 5-year periods: 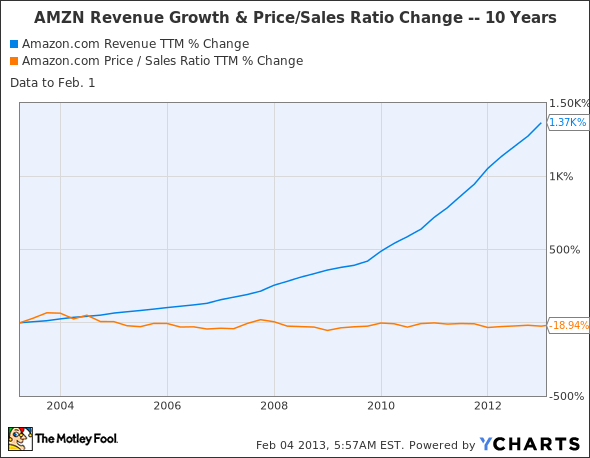 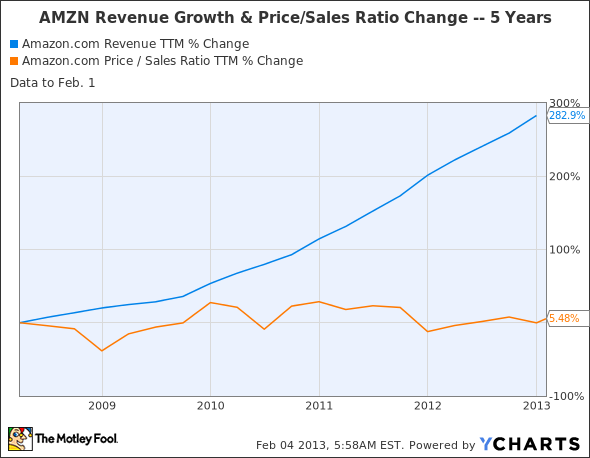 The stock price has tracked very closely to revenue changes, as analysts are using the Price/Sales ratio as a main valuation tool, as per above.

As this chart shows, the stock price is also now tracking very closely to the cash generated from operations. Granted, the Price/Cash from Operations ratio has been extremely generous. But it does show Amazon is not getting a totally free pass on profitability. 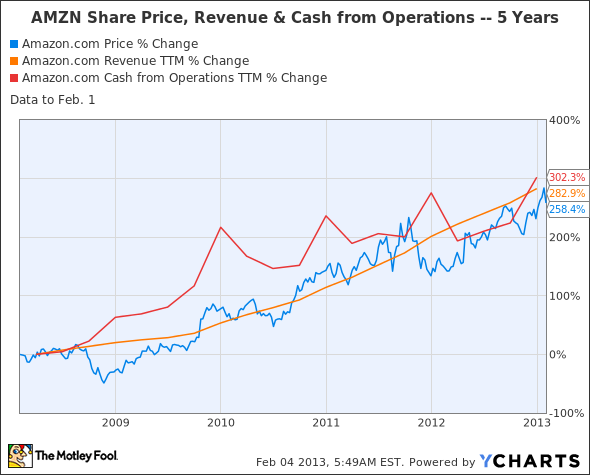 This is the same chart as above, but with FCF added. FCF is not being used to value the stock.

Through 2011, cash from operations and FCF were tracking very closely (changes by percentage, not numbers). In 2012, the company started using a greater percentage of its operating cash flow for investments in growth. 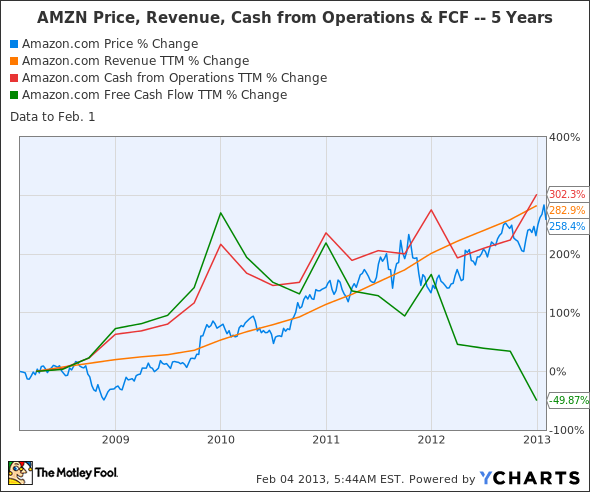 Amazon’s 2012 operating and profit margins were 1.11% and -.06%, respectively. The company has been sacrificing margin for growth. Here’s the 10-year picture for quarterly profit margin: 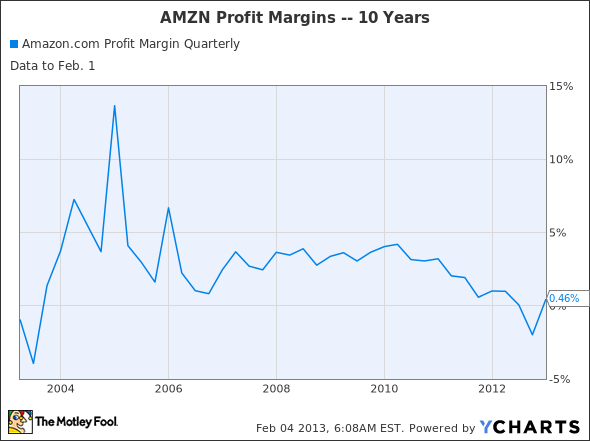 Rather than get ruffled about the “unfairness of it all,” you can turn the fact that analysts are human — and thus subject to human nature just like the rest of us — into an advantage.

Amazon stock? I’d not be a buyer at this level because I don’t have enough “higher-risk money” sitting around. But if I owned it, I’d certainly be not be a seller.

Don’t Miss These Deals Left Behind by the Rising Market: Ford Motor Company...

4 Catalysts That Could Reignite Apple Inc. (AAPL) in 2013