So far, 2013 has been very unfriendly to commodity and commodity stock investors.  Commodity price weakness has led to massive sell-offs in many commodity-producing companies. Certainly, in the future some of these beaten-down names will look like bargains at current prices, while others will likely be out of business. Just as the assault on financial stocks in 2008 created some great opportunities so to has the current sell-off in commodities. However, just as not every financial stock was a good buy in 2008, not every beaten down commodity stock is a buy today.

Over the past five years, as shown by the chart below, coal stocks have been under heavy selling pressure. The Market Vectors Coal Index ETF has fallen by more than 66%. In my view, there are essentially three reasons for the sharp decline. First, low natural gas prices have proved a major problem for coal producers as numerous utilities have switched from gas to coal. Unfortunately for coal producers, the relative stability of natural gas prices so far in 2013 has not slowed the decline in coal stocks.

The second and third reasons why coal stocks have come under pressure in 2013 are the Chinese slowdown and President Obama’s renewed anti-coal policy stance.

My problem with coal is that there are too many headwinds. Perhaps natural gas prices will move higher in the coming years. Maybe, if the Chinese economy bottoms out, there will be enough demand for coal to warrant higher prices. It is also possible that the country rejects Obama’s anti-coal policy and pressures the administration to change its stance. I believe the odds of all three of these headwinds going away is too low to warrant a positive view of coal. 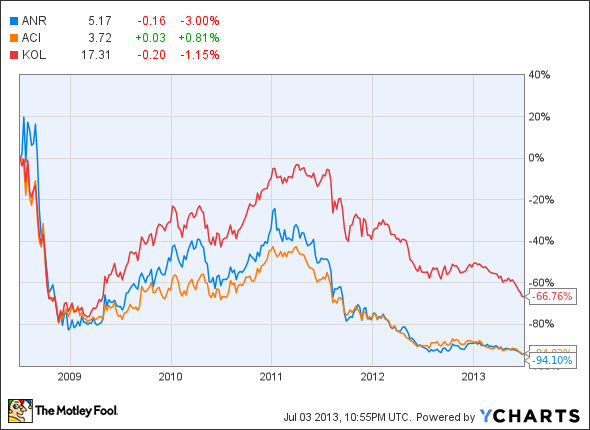 In my opinion both Alpha Natural Resources and Arch Coal have the same critical flaw: too much debt.

However, it should be noted that both companies do have a significant amount of cash on the balance sheet right now: close to $1 billion for Arch Coal Inc (NYSE:ACI) and $900 million for Alpha Natural Resources, Inc. (NYSE:ANR). This means that both companies can buy some time. In other words, bankruptcy is not imminent. As discussed above, I do not believe any positive turn is coming anytime soon and thus I am worried about the long-term viability of these two coal producers.

After more than a decade of uninterrupted gains, gold prices, along with silver prices, have finally stumbled in 2013. One could simply argue that these markets were simply due for a much needed correction as it is incredibly rare for any asset to move higher with such consistency over a decade-long period.

Alternatively, the sell-off in gold and silver has been blamed largely on news of Fed tapering and a lower than expected inflation. In my opinion, all three of these factors  have contributed to the sharp move lower in 2013. But I’m not convinced that these factors will stop gold from moving higher over the next few years.

On the bullish side, gold and silver prices are now close to cost of production, and thus miners are likely to shut in production. Production cuts would likely lead to stabilization of prices. Furthermore, the big trends that have driven gold & silver higher over the past decade remain in place: easy monetary policy on behalf of the world’s leading central banks, and demand for gold on behalf of small investors and the world’s central banks.

While it is true that Fed policy is likely to be a headwind for gold & silver, it should be noted that gold & silver have not responded to the massive easing from the Bank of Japan. While gold and silver may fall farther over the short term, I believe the long-term bull case remains intact.

The key takeaway here is that NovaGold and Silver Standard are not in danger of a liquidity squeeze anytime soon. Their liquidity will allow them to better ride out the storm than their leveraged counterparts in the coal sector.

Much like the bear market for financial companies ended in early 2009, the commodity bear market will end sooner or later. I believe the long-term upside for gold & silver is much greater than the upside for coal. I am confident that NovaGold and Silver Standard will be able to ride out the storm if pressures intensify. Given the financial position of Alpha Natural Resources, Inc. (NYSE:ANR) and Arch CoalArch Coal Inc (NYSE:ACI), I cannot say the same thing about them. For these reasons, I am endorsing NovaGold and Silver Standard as speculative buys, and cautioning investors against buying Alpha Natural and Arch Coal.

The article 4 Single-Digit Commodity Plays: 2 to Buy, 2 to Avoid originally appeared on Fool.com and is written by Sammy Pollack.

Arch Coal Inc (ACI): Would the Sale of Assets Help This Coal Stock?