We track 13F filings from hedge funds and other notable investors, using the disclosed information to help us develop investing strategies. For example, we have found that the most popular small cap stocks among hedge funds (which we define as market capitalizations between $1 billion and $5 billion) generate an average excess return of 18 percentage points per year (learn more about our small cap strategy). We can also look at which small cap stocks top investors such as George Soros have been buying and use these as a list of initial ideas for further research. Here are five of Soros’s largest small cap holdings as of the end of December (or see the full list of stocks Soros reported owning from the 13F).

Soros owned slightly less than 4 million shares of Acacia Research Corporation (NASDAQ:ACTG), which acquires and licenses intellectual property portfolios including patents. Wall Street analysts are very optimistic about the company’s future earnings growth rate: the stock carries trailing and forward P/E multiples of 24 and 11, respectively, with a five-year PEG ratio of 0.6. Note that the market likes the company, as shown by the high trailing earnings multiple but is much less bullish than the sell-side. Malcolm Fairbairn’s Ascend Capital reported a position of 1.2 million shares as of the end of December. 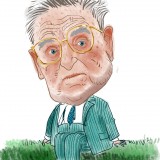 According to the 13F, Soros had a little over 3 million shares of Shutterfly, Inc. (NASDAQ:SFLY) in his portfolio at the end of the fourth quarter of 2012. The digital photo website and app developer, like many social media companies, has been seeing high revenue growth. However, earnings were also up 50% in the fourth quarter of 2012 versus a year earlier. Earnings are certainly low- the forward P/E is 53- but its growth potential may make it worth watching. Alydar Capital, managed by John Murphy, had Shutterfly, Inc. (NASDAQ:SFLY) as its largest holding according to that fund’s own 13F (find Alydar’s favorite stocks).

Soros increased the size of his position in Churchill Downs, Inc. (NASDAQ:CHDN) by 28% between October and December to a total of about 550,000 shares. The owner of horse racing tracks- which also often offer gaming facilities- experienced a small increase in revenue in its last quarterly report compared to the fourth quarter of 2011, but net income fell significantly. With the stock trading at 21 times trailing earnings it doesn’t look like a good buy at this time. GAMCO Investors, which is run by billionaire Mario Gabelli, owned about 850,000 shares at the beginning of this year (research more stocks GAMCO owns).

The filing disclosed ownership of 1.2 million shares of Aspen Technology, Inc. (NASDAQ:AZPN), a $2.7 billion market cap provider of enterprise software which helps companies design industrial products and manage supply chains. Recent growth has been strong, with sales rising 16% in its most recent quarter compared to the same period in the previous year and earnings doubling. However, investors are already pricing in higher growth. Consensus estimates for the fiscal year ending in June 2014 imply a forward P/E of 54. Alkeon Capital Management was another major shareholder of Aspen Technology, Inc. (NASDAQ:AZPN) (see more stocks Alkeon likes).

Is General Mills, Inc. (GIS) a Good Stock to Buy?