It hasn’t been a fun month to be an investor in clinical-stage biotech ChemoCentryx Inc (NASDAQ:CCXI). After announcing at the end of August that its lead drug candidate vercirnon failed the first of four late-stage trials targeting Crohn’s disease, the company dropped a bomb Tuesday with less-than-riveting top-line interim results for its second most advanced drug candidate. CCX140 is being evaluated in a phase 2 trial in patients with diabetic nephropathy, or diabetic kidney disease. Results failed to impress some analysts and shares finished the day down more than 24%. They have been sliced in half in the last three months alone. 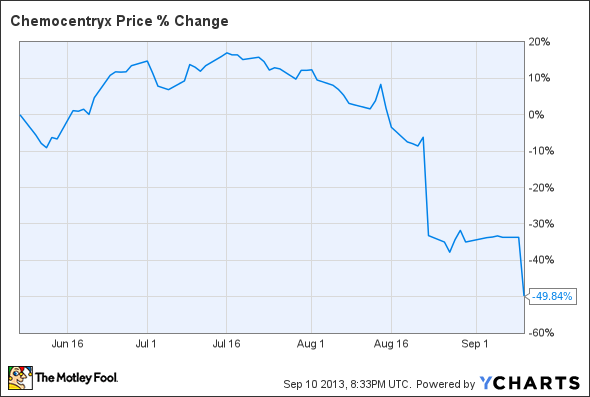 Investors could look at recent developments as a short-term hiccup in the road for a developmental company, but I may be a little more cautious about investing in ChemoCentryx Inc (NASDAQ:CCXI). Why? The company has positioned its entire pipeline to take advantage of a specific biological pathway shown to be associated with inflammation. Should two early misses with its most advanced drugs push investors toward the exits?

#platformproblems
The company’s platform is centered on inhibiting the chemokine system, which is a complex communication system between cell receptors and the immune system. When certain signal-inducing cells aggregate at a source of inflammation a specific immune response is triggered. Inhibiting receptors has been shown to reduce inflammation, but will it do so with significance in a clinical setting? That is the question investors need to begin asking themselves.

In case you have been asleep in the past, well, decade or so, anti-inflammatory drugs are hot commodities in biotech. Companies have had the most success inhibiting the TNF-alpha pathway, while JAK inhibitors are quickly shifting from potential to performance. Consider how AbbVie Inc (NYSE:ABBV) and Johnson & Johnson (NYSE:JNJ) have fared with their first-generation immunology drugs:

Humira brings in more than half of AbbVie’s total revenue and will become just the second drug ever to record $10 billion in a single year. That poses potential problems down the road, but investors sure aren’t complaining about owning a piece of the most successful drug in the world. All companies want to lead their markets and AbbVie Inc (NYSE:ABBV) has done exactly that. And while Johnson & Johnson (NYSE:JNJ) relies heavily on Remicade, it has already begun transitioning its anti-inflammatory portfolio to expanded treatment options for Simponi and its next-generation blockbuster Stelara. In fact, Stelara has enjoyed one of the most successful launches in the history of the industry on the heels of incredible convenience for patients: Far fewer injections are given in the same time period when compared to previous generation blockbusters.