According to a filing with the SEC, Eric Wiseman, who sits on the Board of Directors at health insurer Cigna Corporation (NYSE:CI), directly purchased 4,200 shares of the company’s stock on March 6th at an average price of $59.30 per share. He now owns a little less than 8,900 shares of Cigna, so in percentage terms this was a near doubling of his holdings. We track insider purchases because it generally doesn’t make sense for insiders to buy more shares rather than diversify, with the action only being rational if they are confident the stock price will rise. In fact, studies show that there is a small outperformance effect for stocks bought by insiders (learn more about studies on insider trading).

With a recent acquisition, Cigna Corporation reported higher revenue and earnings numbers in the fourth quarter of 2012- and for the year as a whole- than in the same periods in 2011. At a market capitalization of $17 billion, Cigna trades at 11 times its trailing earnings; health insurers are generally cheap as investors worry that the federal government will further regulate these businesses. Wall Street analysts are forecasting limited earnings growth over the next two years, with a forward P/E of 9. We would note that health insurers generally have little exposure to the broader economy, and Cigna is well in line with that pattern as it carries a beta of 0.6. 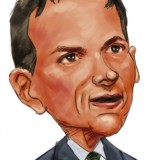 Billionaire David Einhorn of Greenlight Capital named Cigna Corporation one of his two favorite longs at the Value Investing Congress last October. Because we track 13F filings from hedge funds such as Greenlight as part of our work developing investment strategies (for example, we have determined that the most popular small cap stocks among hedge funds generate an average excess return of 18 percentage points per year), we are able to see that the fund owned 8.2 million shares of the stock at the end of December (find Einhorn’s favorite stocks). Jeffrey Tannenbaum’s Fir Tree slightly increased its position to a total of 4.6 million shares (see Tannenbaum’s stock picks). Maverick Capital, managed by Lee Ainslie, cut its stake by 39% although the fund did still report a position of 3.7 million shares (check out more stocks Ainslie was buying and selling).

How does Cigna compare to its peers?

Other health insurers include Aetna Inc. (NYSE:AET), WellPoint, Inc. (NYSE:WLP), UnitedHealth Group Inc. (NYSE:UNH), and Humana Inc (NYSE:HUM). We’ve mentioned that health insurers generally trade at low earnings multiples, and it turns out that the forward P/Es for these four peers are all in the 8-9 range. This is the case even though Cigna has been a much stronger market performer over the last year, rising over 30% while three of the peers we’ve covered here have actually experienced a decline in price. Net income was down at Aetna, UnitedHealth, and Humana in their most recent quarter compared to the same period in the previous year; while WellPoint did manage earnings growth, sales were only up 1% and so we are skeptical that the company will be able to sustain its growth rate on the bottom line.

The industry does have some risk, but we think that the earnings multiples are low enough that investors should at least consider looking at health insurers; with most betas being significantly below 1 these companies often fulfill a defensive role as well. Most of Cigna’s peers have not done particularly well in terms of their recent financial performance, though of course Cigna’s own numbers are skewed by its acquisition. If the company does look like it will be able to generate even modest earnings growth going forward, it might be the best pick in its industry.