5 Undervalued Major Oil Companies: But Which Will Be a Gusher for Your Portfolio?: Chevron Corporation (CVX) and More

While the overall market has been trading higher recently, there have been pullbacks among several major oil companies that may be interesting entry points for a longer-term investment.  While the fundamentals of the oil business have improved over the past calendar year, the prices of the largest oil companies have not followed suit.  Oil giants, such as BP plc (ADR) (NYSE:BP), ConocoPhillips (NYSE:COP), Chevron Corporation (NYSE:CVX), TOTAL S.A. (ADR) (NYSE:TOT) and Exxon Mobil Corporation (NYSE:XOM) have in aggregate suffered a fair amount of margin compression.  Due to the improving fundamentals of these companies it may be a good time to put money to work in some of the names.  The table below compares each of these companies across several metrics.

While BP and TOT are clearly the cheapest of the bunch they are so for a reason.  The former still has considerable liabilities from the 2010 Deepwater Horizon oil spill, which will likely hold back earnings growth and cause uneven performance.

Total, on the other hand, has large exposure to Europe and has underperformed in terms of earnings growth over the past 19 years (Figure 1).  The company could be an interesting play on an improving European economy, but unless there is a major turn it seems that the lower valuation is correctly discounting less vibrant prospects for growth. 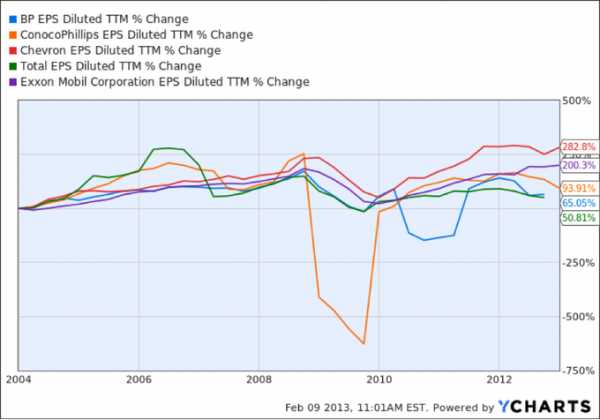 ConocoPhillips is very cheap and very shareholder-friendly, however, it may be difficult for them to maintain the present share repurchase program and pay their hefty dividend.  The cash balance of the company has declined over the prior year period (Figure 2), which has prompted asset sales and a spinoff of their refining business, leading to less diversification in general.  While betting against Conoco would be a bad idea, they are not my favorite pick in this space due to a lack of diversification. 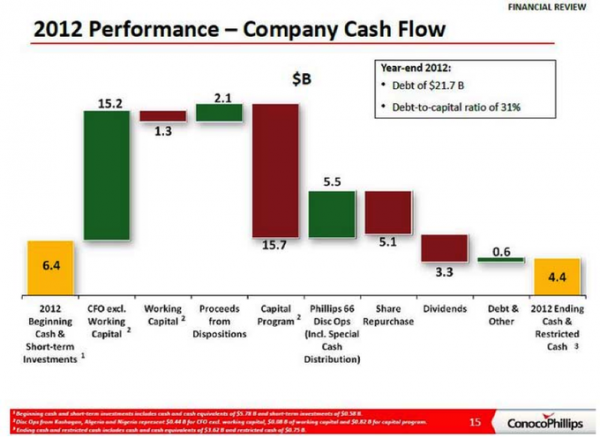 As can be seen from earnings growth in the first figure, Chevron and Exxon have significantly outperformed.  Both are diversified among downstream and upstream oil production, making the wager safer as a more diversified revenue stream should prove to be less volatile.

Both names are very sound investments at the present time, but in order to ascertain which should prove to be a superior investment I turned to the most recent quarterly reports.  For Exxon: 63% of revenues come from upstream oil and natural gas production, while 33% come from downstream refining operations and the rest result from chemical production (with a small net cost for their financial division).  Exxon averaged 2,116,000 barrels of oil-equivalent production per day and 12.25 billion cubic feet per day of natural gas production. 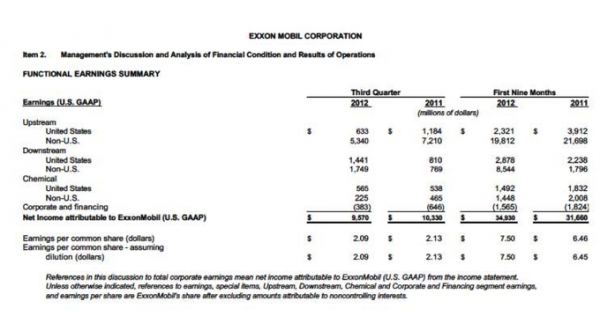 Chevron, on the other hand, receives little earnings from chemical production while its upstream production outweighs downstream earnings by a factor of 5.2:1.  Thus Chevron has more exposure to refining as a percentage of earnings and has recently outperformed in part due to this overweight exposure.  Chevron’s net oil-equivalent production was 637,000 barrels per day, while its net liquids component was 3.78 billion cubic feet per day.  In other words, both Exxon and Chevron are nearly equivalent in terms of natural gas exposure. 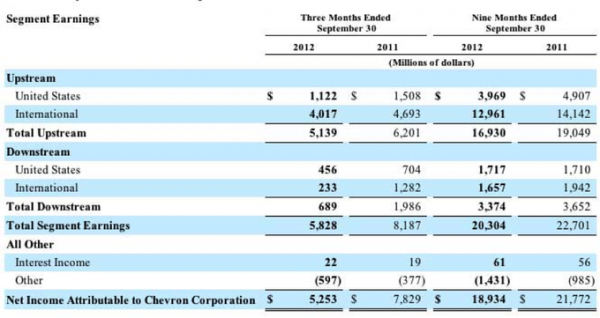 Thus the major differences between the two firms are:

1). Chevron’s earnings have a higher refining component and refining has done very well recently.  However, the market has probably priced this in already.

2). Chevron has outpaced Exxon over the prior 10-year period in earnings growth, although their earnings have been more volatile.  Again, this appears to be priced in.  Exxon overpaid for natural gas assets in the past, which hurt performance.  However, at this juncture it is difficult to envision further difficulties as a result.

While Chevron might win by a nose if you simply want to buy the stock, Exxon is very desirable for a leveraged trade through the use of call options.  It comes down to this: stock buybacks only have one purpose, which is to increase the value of the stock through shrinking the outstanding share count.  Presently, Exxon is repurchasing $20 billion in stock every year, or 5% of the outstanding count.  Two years into the future, this should shrink the count by a further 10%. With the stock trading at the bottom of its long-term valuation in terms of cyclically adjusted P/E or price/sales, it is very hard to imagine how this price will not rise, unless two years from now the economy is in very dire straits.

While natural gas prices have been harmful to both Exxon and Chevron, these prices seem to have bottomed recently.  With oil trading about where it has been for the last several years and natural gas trending up, there should be no negative surprises in store unless the economy takes a turn for the worse. 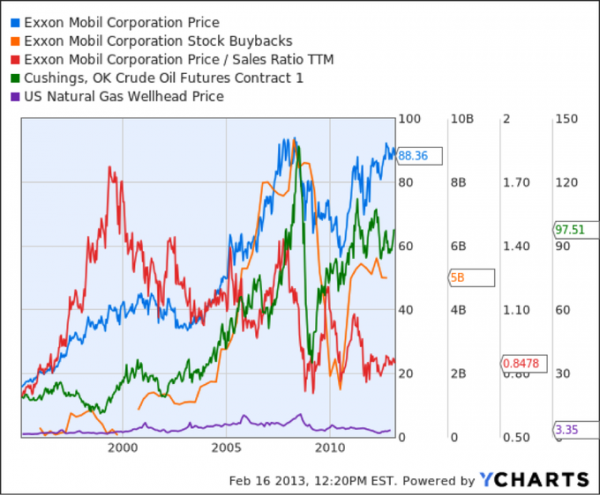 As a result of their repurchase program, I would argue that long-dated calls on Exxon are dramatically underpriced.  Purchase of a $70 Jan 2015 call delivers a breakeven price of $89.45 or 1.1% above where the stock is presently trading.  In other words, the owner of 100 shares of Exxon is willing to sell you his upside minus the 2.5% dividend, or a 4.5:1 levered trade at a cost of 3.1% per year.

A $75 Jan 2015 call would have a breakeven of $90.42 or 2.3%, a 5.7:1 levered trade at a cost of 3.7% per year. Because Exxon pays most of its shareholder remuneration in repurchases, dividends you will recieve the full value of the share repurchases, although it is possible the market will not efficiently price it in.  Consider that if there is no growth in Exxon’s earnings, a 10% reduction in share count and the same valuation a purchaser of the $75 Jan-2015 call would expect a 50% return by Jan-2015.  With Exxon still near its lowest price to sales valuation in 20 years, this wager appears very desirable in terms of risk vs. reward. 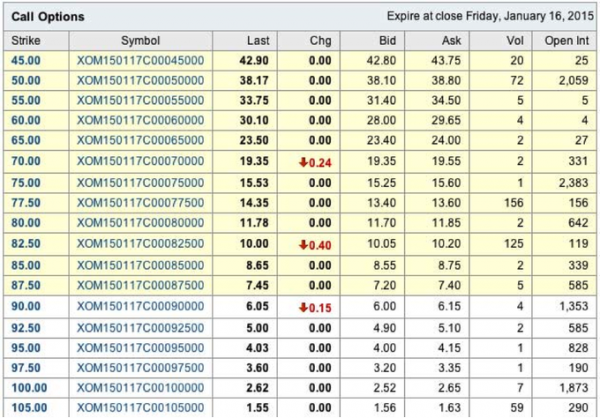 Another interesting part of this strategy is that you cannot lose more than the value you paid for the option, thus instead of buying 100 shares of Exxon for $8,900, you could buy one contract for $15.45 and invest the rest in bonds.  Your maximum loss would then be 16.7% no matter how badly the market declines and you would expect all the upside for holding 100% of your portfolio in stocks, depending of course on how Exxon performs relative to the market.   Because the contract is dated two years out and the average bear market lasts 1.5 years, it is likely that even if you bought the call and a bear market started immediately you would recoup some of your capital before the contract expires in 2015.

The options strategy is therefore an interesting idea for limiting losses while keeping pace should the present bull market continue.  Otherwise, you could simply buy the stock and know that eventually Exxon should do quite well: higher prices are simply inevitable with the share count shrinking by 5% each year and the some of the lowest valuations in the past 20 years excluding 2008-2009.  Collecting a 2.6% dividend while you wait isn’t too shabby either.

The article 5 Undervalued Major Oil Companies: But Which Will Be a Gusher for Your Portfolio? originally appeared on Fool.com and is written by Brendan O’Boyle.

Why the Dow Should Hate Change — and Other Fascinating Facts: Altria...