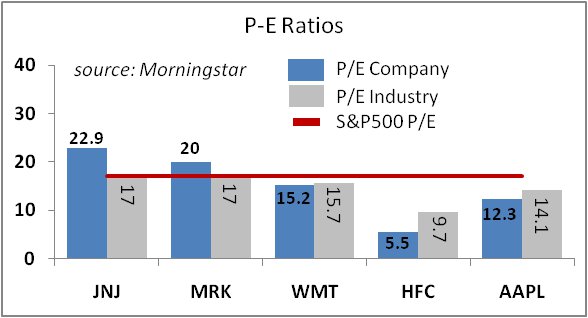 This past April, two PointState Capital’s principles, including its founder, Sean Cullinan, left the firm. That management reshuffle left Zachary Schreiber as the new CEO. PointState Capital has returned 8.7% this year through October. Druckenmiller’s alumni at PointState Capital follow his value investment methodology, so here is a closer look at their five dividend-paying value picks:

Johnson & Johnson (NYSE:JNJ) is one of the largest pharmaceutical and healthcare products companies in the world. PointState Capital had some $157 million invested in this stock, according to the fund’s latest 13-F filing with the Securities and Exchange Commission. The position in J&J was initiated in the second quarter. J&J has a dividend yield of 3.5% on a payout ratio of 80% of trailing earnings and 59% of free cash flow. Its peers Pfizer Inc. (NYSE:PFE), Novartis AG (NYSE:NVS), and Covidien plc (NYSE:COV) pay dividend yields of 3.6%, 4.1%, and 1.9%, respectively. J&J is a dividend aristocrat that has raised dividends for 46 consecutive years. Over the past five years, J&J saw its EPS contract at an average rate of 1.4% per year, while its dividends grew at an average annual rate of 8.4%. The firm’s EPS growth is forecast to average 6.5% per year for the next five years. While the company’s financial performance has suffered in recent periods due to patent expirations, quality control issues/product recalls, and litigation, J&J remains a powerhouse with a promising pipeline of products, strong cash flow generation capacity, and attractive dividend. The stock has a free cash flow yield of 3.2%, a ROE of 14.5%, and a return on invested capital [ROIC] of 12%. On a forward P/E basis, J&J is trading at 13.1x, slightly higher than Pfizer and Novartis at 11.1x and 11.7x, respectively. J&J’s stock is up 7.0% over the past year. Billionaire Ken Fisher is also bullish about the stock.

Merck & Co., Inc. (NYSE:MRK) is another major pharmaceutical, dividend-paying position in PointState’s portfolio. The position was also initiated in the second quarter. PointState’s stake in the company was valued at $156 million at the end of that quarter. This pharmaceutical giant pays a dividend yield of 3.8% on a payout ratio of 76% of trailing earnings and 49% of free cash flow. Its main competitor Pfizer Inc. pays a slightly lower dividend yield, while Novartis AG pays a higher yield. Over the past five years, Merck & Co.’s EPS was flat; however, its dividends grew at an average annual rate of 2%. Analysts predict EPS growth to average 3.9% annually for the next five years. The company’s revenues took a beating after its asthma medication Singulair lost patent protection. The company is facing other patent expirations, which threaten to hurt its top and bottom lines. However, the company is investing in new drug candidates, including a new brand of cancer fighting drugs. As of July 2012, the company had some 20 drugs in phase 3 trials, and about as many products in phase 2 trials. The stock has a ROE of 12.2% and a ROIC of 9.6%. In terms of valuation, Merck & Co.’s stock has a forward P/E of 12.4x, slightly higher than the ratios of Pfizer and Novartis. The stock has rallied 22.4% over the past 12 months. Among fund managers, Phill Gross (Adage Capital) and John Levin (Levin Capital Strategies) are big fans of the stock.

Wal-Mart Stores, Inc. (NYSE:WMT) was another new position in PointState’s portfolio in the second quarter, valued at $82.6 million, according to the latest 13-F filing. The company is the largest U.S. retailer, with sales totaling some $419 billion in 2011. The company is currently yielding 2.2% on a payout ratio of 34% of trailing earnings. Its smaller competitors Costco Wholesale Corporation (NASDAQ:COST) and Target Corporation (NYSE:TGT) pay dividends yielding 1.2% and 2.3% per year, respectively. Over the past half decade, Wal-Mart expanded its EPS at an average annual rate of 9.2%, while its dividends grew at a rate of 13.5% annually. The company’s EPS is expected to grow, on average, 9.4% per year for the next five years. The company is a value play in an environment in which value-driven customers and those looking for bargains amid a weak economy flock to deep discounters. The company is also well positioned for sales expansion in emerging markets, which will be the leading drivers of growth in the future. The stock has a free cash flow yield of 3.1%, ROE of 24%, and ROIC of 14.8%. As regards its valuation, Wal-Mart’s stock is trading at a forward P/E of 14.1x, compared to Costco’s 21x and Target’s 13.8x. Wal-Mart’s stock is up a whopping 21.6% over the past year. The stock is popular with Warren Buffett, who owns nearly $3.3 billion in this stock.

HollyFrontier Corp (NYSE:HFC) is another dividend-paying position in PointState’s hedge fund. The fund reported owning some $48 million in this stock. HollyFrontier is an independent petroleum refiner and marketer in the United States. It pays a dividend yielding 2.0% on a payout ratio of only 11% of trailing earnings. For the reference, the company’s rivals Marathon Petroleum Corp (NYSE:MPC) and Valero Energy Corporation (NYSE:VLO) are yielding 2.8% and 2.4%, respectively. HollyFrontier boosted its dividends at an average rate of 75% per year over the past five years, with the largest nominal hike made last year. The company’s EPS, which had grown at an average rate of about 25% per year over the past five years, is expected to slow down to a meager 1% per year for the next five years. HollyFrontier is generating substantial free cash flows. In line with that trend, in October, the company paid a special dividend of 50 cents per share. The stock has a ROE of 28% and a ROIC of 22%. The stock is trading on a forward P/E of 6.6x, compared to 6.2x for Marathon Petroleum and 5.8x for Valero Energy. Over the past 12 months, this stock has gained nearly 46%. RenTech’s Jim Simons is also bullish about this stock.

Apple Inc. (NASDAQ:AAPL) is also one of the positions in PointState’s portfolio. The stake was valued at nearly $38 million in the latest 13-F filing. Apple Inc. is the company with the largest market capitalization. Apple Inc. pays a dividend yield of 2.0% on a payout ratio of 24% of trailing earnings. The company’s competitors Microsoft Corporation (NASDAQ:MSFT) and Hewlett-Packard Company (NYSE:HPQ) pay dividends yielding 3.2% and 3.9%, respectively. Rival Google Inc (NASDAQ:GOOG) does not pay any dividends. Apple started paying dividends in the third quarter. Over the past five years, Apple’s EPS expanded at an average annual rate of 62%. The company’s EPS is forecast to grow at an average rate of 21% annually for the next half decade. Apple is a major growth and value play. The company is a leader in innovation and its products are easily outperforming those of its competitors. Apple is awash in cash, boasting as much as $29 billion in cash and short-term investments and $44 per share in free cash flow. The company is debt free. Apple’s stock has a high free cash flow yield of 8.1% as well as ROE and ROIC of 35%. As regards its valuation, the stock has a forward P/E of 11x. For the reference, Microsoft and Google have forward P/Es of 9.1x and 15.2x, respectively. Apple’s stock is one of the most widely-owned stocks by hedge fund managers. Especially bullish about the stock are Tiger-Cub Rob Citrone (Discovery Capital Management), D. E. Shaw, Philippe Laffont (Coatue Management), David Einhorn, Steve Mandel, and Chase Coleman.