In Dec. 2011, I attempted to help out family and friends by creating what I considered an ideal growth portfolio.

Each month, I check over all 13 stocks in this portfolio and pick three that are particularly intriguing. That’s why I call them “Buy Now” stocks. Read below to see what those three stocks are, and at the end, I’ll offer up access to a special premium report on one portfolio stock that’s taken a beating lately.

Well, in the short term, it’s quite possible. And to be honest, that pullback could be significant. Then again, trying to predict short-term movements is a losing battle, and I think the long-term path of this company looks great.

Contrary to popular opinion, LinkedIn Corp (NYSE:LNKD) only makes a slice of its money from advertising. Instead, it caters more toward individuals looking to get a job and companies looking for qualified employees. If it were to reach the height of its potential, LinkedIn Corp (NYSE:LNKD) could completely rewrite the human resources division of large and small businesses alike.

And the company’s recent past shows that its model is catching on. Source: LinkedIn. All numbers in millions. Talent Solutions comes from companies, Premium Subscriptions from individuals, and Market Solutions from advertisers.

Baidu
There are a lot of reasons that Baidu has been knocked down lately: It’s located in China, a place that’s been known for stock frauds; it is facing increased competition; growth at Baidu and China in general is starting to slow.

But the fact remains that there’s been no signs of fraud from the company, and competition and slowed growth are hardly enough to explain how the stock for China’s largest search engine is now trading for its lowest multiple ever, despite having grown revenue and earnings at impressive rates. Sooner or later, something’s got to give. 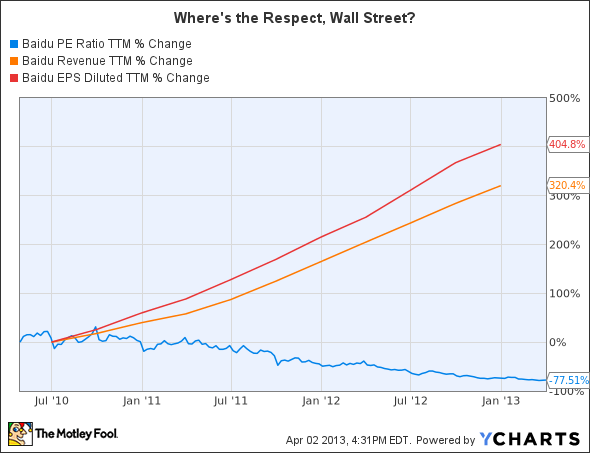 3D Systems Corporation (NYSE:DDD)
It’s been a tough couple of months for investors in this 3-D printing company, whose shares have fallen more than 30% since late January.

But the fact of the matter is that this is a growth portfolio, where it’s OK to place some big bets. The future of 3-D printing could be huge. And with 3D Systems Corporation (NYSE:DDD) now trading for just 25 times expected earnings, now is as good a time as any to buy a starter position.

Are stories of this demise greatly exaggerated?
You might notice that I left Intuitive Surgical off my list, even though the stock has dropped 15% since mid-February. That’s because the president of a leading medical organization has called the usefulness of the company’s daVinci Surgical Robot into question. For the time being, I’m sitting on my shares.