3 Stocks Worth Looking Into From The Financial Sector: Wells Fargo & Company (WFC) and More

The banking industry is still one of the best sectors to invest in. Even though the industry can face extreme highs and lows along the way, many observers believe that the sector is stable compared to investing in alternative markets. Since its downfall in 2009, the banking industry has been rebounding, with investment banks showing impressive growth over the past few years. Also, most of these investment banks believe that there are several good years ahead, with expected U.S economic growth as one of the contributing factors.

However, the economy has not performed as expected, with growth of slightly over 2% in the past quarters and the unemployment rate unchanged. As a result, investor confidence has not been great. That’s why many investors found it surprising for the financial sector to shine in the previous year.

Goldman Sachs did quite well in 2013. The company shone in the previous year, exceeding many analysts’ expectations. Q4’s earnings report showed a net profit increase to $2.9 billion. This increased EPS to $5.60, a significant improvement from the same quarter in 2011. The earnings for the full year came out to  $7.5 billion which showed an increase of over 70%, compared to the $4.4 billion earnings in 2011. 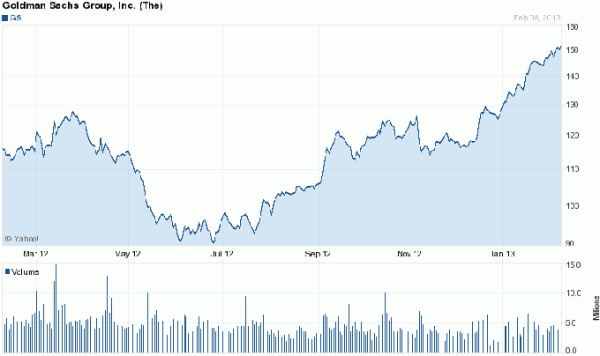 Currently trading at its 52-week high, Goldman Sachs’ major strength has been in Investment Banking as the division, along with Investment Management, has shown growth. It is clear that Goldman Sachs still attracts some of the brightest and smartest individuals in the industry.

Another reason why Goldman’s stock has showed a tremendous increase is the sale of its stake in the ICBC. This not only helped the company generate around $1 billion in cash inflow, but will also help Goldman in improving its capital ratio as capital requirements get tougher with Basel III’s capital requirements.

JPMorgan Chase, one of the world’s largest asset management firms, is another strong bank in the financial industry, which is expected to grow further in 2013. After the “London Whale” incident, which resulted in a loss of $6 billion, JPMorgan’s financials still look strong and it seems like if many have already forgotten about the loss after the latest earnings report.

The latest report showed that revenues increased by around 10% for the quarter, while full-year profit reached another record at more than $21 billion. Apart from that, the firm’s EPS of $1.40 also beat expectations by nearly 16%. Jamie Dimon, JPMorgan’s chairman and CEO, recently said that all the divisions performed exceptionally well in the quarter, with strong growth expected further in 2013. 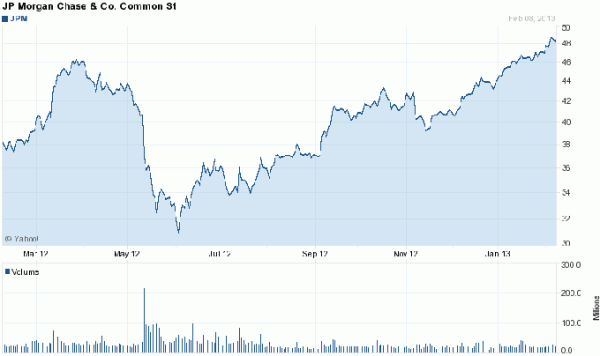 JPMorgan is seen as one of the most valuable banks in the industry, with a market cap of $184.9 billion, compared  to Wells Fargo & Company (NYSE:WFC)’s valuation of $184.2 billion. Many analysts now believe that JPMorgan will outperform Wells Fargo, since JPMorgan’s share price has already gone up by over 10% this year. JPMorgan still looks like an undervalued opportunity, trading at 90% to 95% of its valuation, while other firms in the financial industry are trading over 100% of their valuations.

Mortgage Originations Jump and Ellie Mae Inc (ELLI) Will Too

With The London Whale Dragging On, Should You Sell JPMorgan Chase & Co...